Apple released the iPhone 6 in 2014 and the iPhone 6s followed in 2015. They both look very similar, so what are the main differences? Let’s investigate…

It’s more or less impossible to tell the difference between an iPhone 6 and iPhone 6s in person. Both phones look identical. But there are some pretty major differences on the inside that make the iPhone 6s a vastly superior device.

However, if you’re reading this is 2021, we need to get real: both of these phones are now ANCIENT and while both will still function, meaning you could technically still use them, neither will get any more iOS updates.

And that is bad. Why?

Well, you’ll miss out on new features and the latest security patches and fixes. But that’s not even the worst thing.

The worst thing is that, by 2021 standards, the iPhone 6 and 6s are now grossly under-specced to handle modern applications and games. Again, you can still run them but performance will be sloppy. And some apps will simply stop working.

My advice? Go with one of these iPhones – it’s 2021 and the game has changed.

OK, but HOW do the iPhone 6 and 6s compare? That’s why you’re here, so let’s get stuck into the details of what makes these phones tick and what makes them so different, despite their very similar exteriors…

The iPhone 6, meanwhile, lacks 3D Touch, has an inferior, though still fairly potent CPU, a less powerful camera, less memory, and is made from less durable materials.

Absolutely not. Apple has now officially stopped supporting both phones, so if you got yourself either the iPhone 6s or iPhone 6 today, you would not get any new iOS updates.

If you want a cheaper iPhone, meaning an older model, but one that will still get iOS updates for years to come, your best bet are the following models:

You can, of course, still use the iPhone 6 and iPhone 6s. But you’ll just have to live without iOS updates, leaving you a couple of options.

The first is to jailbreak the phone, so you can run it long term without Apple’s help.

And the second is to simply carry on using it as is, although this approach is risky because new iOS updates contain security updates and without the latest security patches and updates, you leave yourself potentially exposed to hackers and scammers.

For this reason, it is probably advisable to upgrade your phone – either to a new iPhone model or something from Samsung or another Android phone brand.

Again, remember, you can pick up refurbished iPhones for around 40% less than the cost of a new phone, so you could grab the iPhone XS, for instance, for around $400 – maybe less. If money’s tight, this is a great way of NOT locking yourself into an expensive 24 month payment plan with a carrier.

If you can remember back to when the iPhone 6 and iPhone 6 Plus first landed, you’ll remember there being plenty of reports about iPhone 6 Plus bending – this was commonly referred to as “bendgate”.

With this PR disaster firmly in the back of Apple’s mind when its designers and engineers set about designing the iPhone 6s and the iPhone 6s Plus, they were careful to use higher-grade aluminum that was not only more durable but also much less bendy.

iPhone 6 vs 6s – The Main Differences The key differences between the iPhone 6s and the iPhone 6, however, meaning the ones that you, the user, will notice the most are the introduction of 3D Touch, the improvements Apple made to the camera, and the performance of the processor – Apple’s iPhone 6s CPU was around 20% faster and more efficient than the one used in the iPhone 6.

The iPhone 6 and iPhone 6s are remarkably similar in the way they look; they have the same size display (4.7in), the same display spec, and similar camera modules (single 8MP sensor). Visually, the phones look almost identical. But they’re not…

Will you notice this difference? Hardly. Although I do think the iPhone 6s feels a little more sturdy in the hand than the iPhone 6, not that this is a bad thing. I actually prefer it when my phones have some heft about them, especially when the difference in actual weight is quite pronounced (143g vs 129g).

When the iPhone 6s came out, it picked up where the iPhone 6 left off, adding in more performance, more processing power, and more useful features like 3D Touch. It wasn’t a reinvention of the iPhone 6, more a refinement.

But the iPhone 6s does have more performance power than the iPhone 6, as you can see in the benchmarks below. 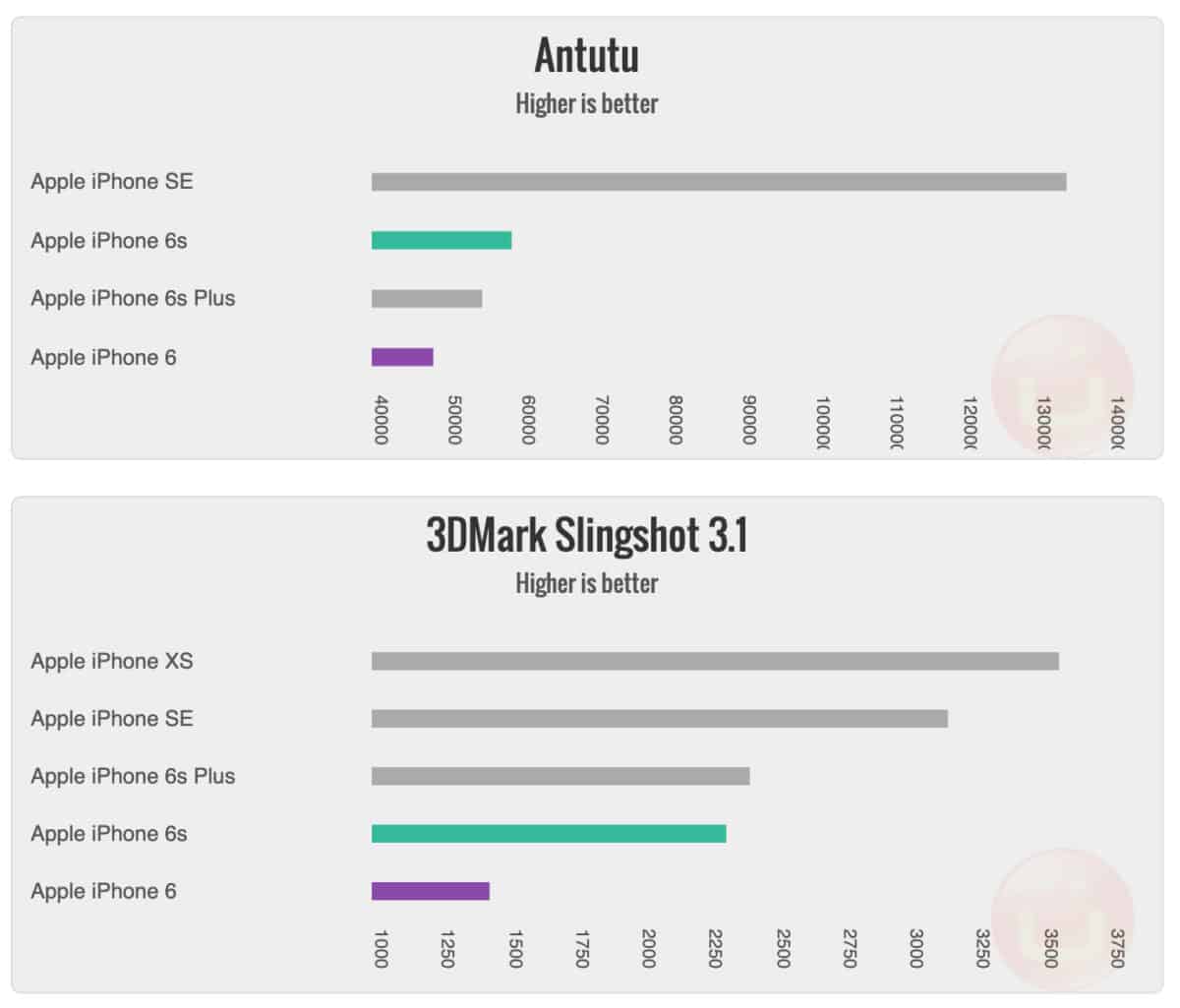 In the real-world, the difference might be hard to spot. Apps will open quicker and switching around iOS might feel a little snappier. If you’re coming from an even older iPhone, like the iPhone 5, the iPhone 6s will feel like a massive update.

I had both the iPhone 6 and iPhone 6s and while I did like the phones, I didn’t really think find too many things to get excited about with the 6s. Yes, 3D Touch was unique and useful, but that was about it really for USPs for the 6s.

In 2021, neither of these phones cut the mustard, however, and neither will be getting any more iOS updates, so performance issues aside, both of these phones are now effectively dead anyway.

Once you’re outside the iOS ecosystem and you’re not getting regular updates, you’ll miss out on new features and important security updates. And while you can live without new features, you really shouldn’t live without the latest security features. Now more so than ever.

Both the iPhone 6 and iPhone 6s are available in the following storage options: 16GB, 32GB, 64GB, 128GB. In this respect, both phones are identical and, of course, the higher the storage model, the higher the cost.

The iPhone 6 shipped with 1GB of RAM, while the iPhone 6s ships with 2GB of RAM. That means, with the iPhone 6s, you have more than twice the memory. And this, along with its newer chipset, is where all that additional performance comes from.

Here’s what Apple had to say about the iPhone 6s’ performance uplift at launch, back in 2014:

“The only thing that has changed with iPhone 6s and iPhone 6s Plus is everything — 3D Touch lets users interact with iPhone in entirely new and fun ways, and the innovative Live Photos brings your pictures to life,” said Philip Schiller, Apple’s senior vice president of Worldwide Marketing. “These are the most advanced iPhones ever, with 7000 series aluminium, ion-strengthened glass, the new 64-bit A9 chip, 12-megapixel iSight and 5-megapixel FaceTime HD cameras, faster Touch ID, LTE and Wi-Fi. Customers are going to love them.”

The iPhone 6 runs a slightly larger battery than the iPhone 6s but, because the iPhone 6s runs a newer, more power-efficient chipset, there is no difference. Both phones will require a top up mid-way though the day, however, if you plan on going out after work.

This is just a fact of life with phones this size. In order to get through a full day on a single charge, you will need a larger battery – like the one used inside the iPhone 6s Plus.

Neither phone is great in the battery department. For the longest time, battery life was my biggest issue with using iPhones. The iPhone 6 Plus and iPhone 6s Plus fixed this, however, bringing 1.5 day battery life to iPhones for the first time.

As always, with batteries, bigger is always better. If battery life is important to you, you’ll want to go with a Plus model – Apple’s standard iPhones simply do not cut it in the battery department. Not compared to phones from OnePlus and Samsung, anyway.

Should You Still Buy An iPhone 6 or 6s?

It’s 2021 now, and both of these phones are very old. Even the newer iPhone 6s is now over five years old:

The iPhone 6s is the better phone but neither are recommended buys in 2021 – things have moved on A LOT in the last five years.

Apple’s iPhone SE (2020) is a great option for those looking to pick up a new iPhone, just for around half the price of the iPhone 11 Pro Max. The iPhone SE (2020) can be had for $399/£419 outright and is available on a range of relatively cheap contracts (which you can see here).

Another option would be to buy a ; doing this will let you buy a newer, higher spec iPhone – like the iPhone X or iPhone XS – for around 40% less normal. And do not be put off by them being refurbished; they look and function as good as new – they just can’t be sold as new because they’re either been used briefly or returned to the manufacture for some reason.

Me personally? I’ve bought loads of refurbished tech over the years – from phones to laptops. If you’re interested in doing this I’d strongly recommend you check out our guide on the best places to buy refurbished iPhones – it covers everything you need to know!