iPhone 8 vs iPhone 6s – Are They Still Worth Buying?

If you’re in the market for an older iPhone, two options you might be looking at are the iPhone 8 and iPhone 6s. But how do they compare? Let’s find out, shall we…

The iPhone 6s and iPhone 8 are now fairly old (in iPhone years). It’s been a good long while since either of these iPhones were new, so this means that both can now be bought for hardly any money at all – this is good if you’re after a value for money purchase. But not so good if you want performance.

Why? The iPhone 8 is still plenty powerful; it’ll be able to handle most things, so this is the one to go for out of these two models if you’re on a budget. The iPhone 6s is now a bit too old to recommend. Performance issues aside, it will stop getting iOS updates soon, and that leaves you exposed to all kinds of things you don’t want in your life.

For this reason, the iPhone 8 – in this context – is the phone to go for. However, if you’re shopping with value for money in mind, another great option is picking up a newer iPhone model refurbished – doing this will save you 40% on average. And you’ll get a newer iPhone like the iPhone X or iPhone XS, for instance, which will last you for years to come.

Unsure about refurbished iPhones? You needn’t be; I’ve used multiple refurbished iPhones (always from Gazelle) over the years and I have never had any problems – they look and function as good as new. The only difference is the price; refurbished iPhones are 40% cheaper than buying the same phone new. And for those shopping with value for money in mind, this the #1 reason to go this route. 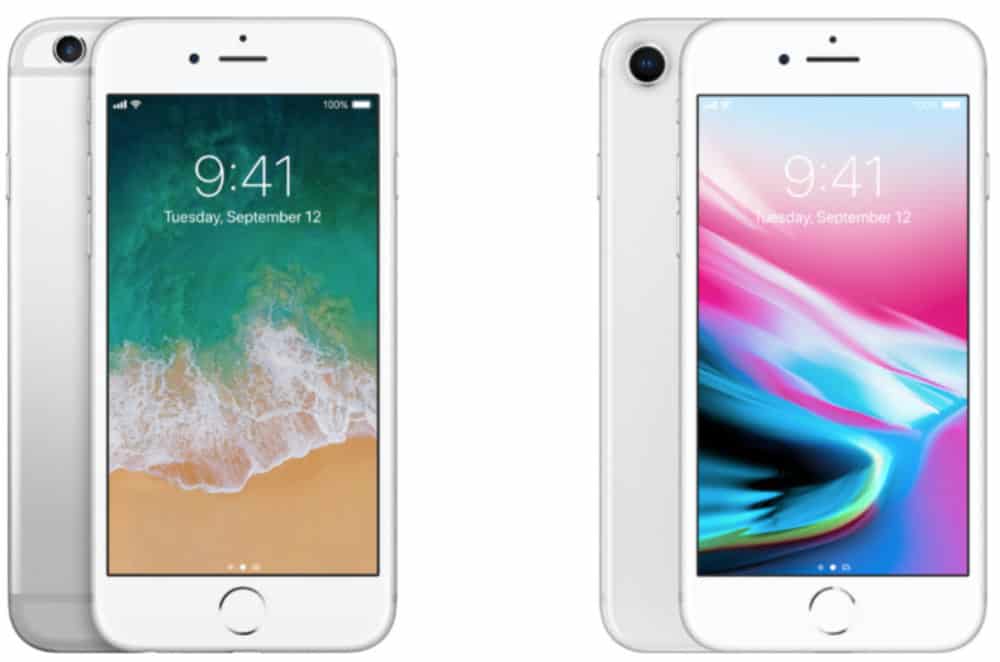 As for the design, both feature aluminum bodies with rounded corners, but the iPhone 8 adds a nice glass back paneling to it (for wireless charging capabilities). This gives it a shine like the iPhone 4 used to have. Because of the glass back, the iPhone 8 is just a tad thicker and heavier than the iPhone 6s–but not by much. The iPhone 8 also does away with the antenna bands on the back of the iPhone 6s, so it’s a cleaner design.

Another advantage the iPhone 8 has is its Splash, Water and Dust Resistant, whereas the iPhone 6s is not. As far as color options go, the iPhone 6s offers four options, while the newer iPhone 8 only offers three.

As with the iPhone 7 as well, there’s absolutely no difference in the displays of the iPhone 8 and iPhone 6s. Each offers a 4.7-inch display with a 1334×750-pixel resolution at 326 ppi. Both phones also offer 3D Touch. However, the iPhone 8 features a True Tone display, which matches the ambient light of the room you are using it in, and you’ll notice a difference because of that.

Both the iPhone 6s and iPhone 8 have the same megapixels in the rear cameras, however, the sensors in the iPhone 8’s rear camera offer optical image stabilization, wide color capture for photos and Live Photos, and quad-LED True Tone flash with slow sync. As for the front camera, the iPhone 8 offers a 7MP sensor (versus 5MP in the 6s) and features 1080p HD video recording (versus 720p HD in the 6s).

The iPhone 8 has a bit of a larger battery than the iPhone 6, at 1821 mAh versus 1715 mAh. However, Apple says both phones basically have the same battery life for most things (thanks to the A11 being a bit more power-efficient than the A9). Here’s how the battery life compares between the two in Talk Time, Standby Time, Internet Use, Video Playback, and Audio Playback:

And don’t forget, the iPhone 8 offers wireless charging, whereas the iPhone 6s does not.

Winner? iPhone 8 – It Has Better Battery Life Than iPhone 6s, Thanks To Apple’s A11 Chipset

Bottom line? Out of these two iPhone options, the iPhone 8 is 100% the one to go for.

Here are the specs for the iPhone 8:

And here are the specs for the iPhone 6s:

If you want a newer iPhone model, but still want to pay 40% less, go the refurbished route and check out Gazelle’s latest deals – you can grab an iPhone X for the price of a mid-range Android phone.