From 1G in the 1980s to INSANELY fast 5G in 2019, mobile data has changed massively over the past few decades. Here, we take an in-depth look at how mobile data has evolved since the dawn of the smartphone... Click to Tweet

What Is Mobile Data? The Basics (In Layman’s Terms)

Mobile data lets you connect to the internet when you’re away from your home WiFi network. Mobile networks are powered by cell towers; these towers are dotted around the country and are collectively known as a “cell” – they power your phone, both for calls and internet connectivity.

These cell towers – often referred to as base stations – are IP-based (Internet Protocol) networks, meaning they use standard communication protocols to send and receive data in packets.

The cell tower is a conduit, essentially, and your phone is the source. 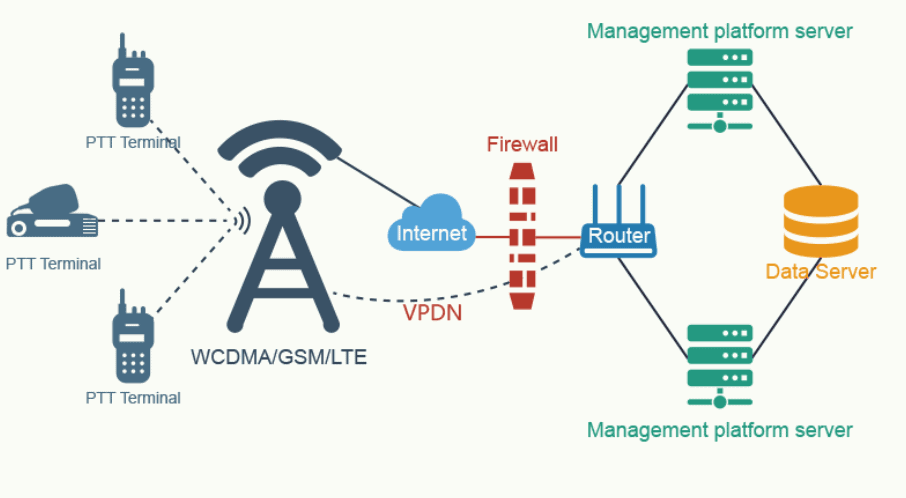 In its simplest form, these base stations are radio systems. They “broadcast” data – both voice and data on 4G LTE – to handsets inside their vicinity. This is why it is important for networks to have towers all over the country, as individual towers only have a certain range.

For instance, say you start your day in New York. When you leave your apartment, you’ll connect to a local base station. You then get in your car and drive to Chicago. During your drive across state lines, you’ll move through several or more base station zones, potentially, swapping from one to the next so as to ensure your phone is constantly connected to the web.

And that’s it, basically. I mean, you can get super-complicated if you like – there are plenty of engineering sites that go into way more depth. But for a layman’s overview of how mobile data works, that’s pretty much it in a nutshell!

Mobile data is important too. You need it to use your phone when you’re in a city, on the road, or traveling. In fact, there is 33 times more demand for mobile data than there is for calls, meaning people surf the web more than they talk these days.

And that figure is constantly increasing.

This is why we now have 4G and 5G networks; older 2G and 3G networks were crumbling under the demands placed on them by millions of people attempting to access the internet at the same time. This is why HSPA and HSPA+ happened. And then 4G LTE. It’s a constant evolution to tackle the ever-increasing demand for mobile data.

Networks and ISPs (Internet Service Providers) are constantly updating their infrastructure to make it more efficient and faster. This costs millions of dollars and is a never-ending process, as the goalposts keep moving – like with the advent of 5G. Most phones now run on LTE (4G), but from about 2022, 5G will take over, bringing with it huge uplifts to download speeds.

To understand how we get got to where we are, you have to understand how the industry, as well as consumer habits, have changed over the years. Back in the early-2000s, demand for mobile data was small. By 2010, it was enormous, following the release of the first true smartphones – Apple’s iPhone and Google’s first run on Android phones.

Prior to this, we had WAP internet – an incredibly slow form of mobile data that anyone over the age of 30 will remember. Fancy new phones like the iPhone and Google’s first run of Android-powered devices caused a change in the way we use mobile devices. For the first time, data became more important that call and texts, a first since the dawn of mobile comms in the 1970s.

The Evolution of Mobile Data (1G to 5G)

How Fast is 2G Phone Internet?

Fast isn’t a word you’d use to describe 2G phone internet. When 2G launched, way back in 1991, the speeds were pitifully slow – around 0.1Mbps to 0.3Mbps. 2G shows up as EDGE or GPRS on your phone, although you’ll seldom see it these days, as most modern phones run on 4G or, at the very least, HSPA+.

2G mobile is VERY slow. You wouldn’t be able to run most modern apps with it and it’d probably take a day or two to download a single song onto your device. As for video streaming in apps like YouTube, forget about it!

So, how slow is 2G mobile data? With speeds of 0.3Mbps, you’re orders of magnitude slower than modern standards of mobile data like 4G and 5G.

To put that figure into context, current 5G standards deliver download speeds of up 125-200Mbps. And, as you can see in the table below, even 3G was a massive upgrade over 2G with respect to overall speed.

Why We Use Mobile Data

Remember that fact from earlier? The one that said demand for mobile data is 33 TIMES greater than demands for calls? That’s why we need mobile data. On top of this, 60% of Google searches are now done on phones (and a large percentage of that will be on mobile data). Mobile data is the backbone of our modern society.

Without it, things would crumble to a standstill.

Think about it: how many times a day do you check your phone? Do you ever wonder if it will have reception? Do you worry that you won’t be able to access the Internet? No. Unless you live in a rural area, your phone – wherever you go – will be connected to the web. This is why data demands are so high in our modern society – there are no limits on connectivity anymore.

And this is addictive. Technology companies know this too. That’s why you’re addicted to browsing Instagram, Facebook, and Snapchat. You’re not doing it for anything important, you just do it because you can and you’re bored. What did people do before? They read a book/newspaper or thought about stuff. Nowadays, people that do that are the minority.

Look around you next time you’re on a train or the underground; everyone is connected, plugged in, consuming. And they’re all doing it on mobile data. This is why companies like Facebook, Twitter, and Snapchat are worth billions: mobile data opened the flood gates to more revenue, more opportunities, and near-constant, round-the-clock engagement.

Video is the big one though. The amount of data used to watch a YouTube video, by 2009 standards, is insane. Back in 2009, watching Netflix or your favorite YouTuber on mobile data would have been next to impossible. But now you can, more or less anywhere. This is great. But it means more demand for data – and more demand means more strain on networks. And that is why the next phase of LTE (5G) happened.

Are You A Light, Medium, or Heavy Phone User?

How you use your phone is specific to you, like your fingerprint. However, there are things that we all do – we all connect to the internet using mobile data most days; we all use smartphones; we all have a near-constant desire for new, engaging information; and, finally, we all love our phones and cannot be without them for prolonged periods of time (even if some won’t admit it).

Me personally? I’m a pretty heavy user. I’m usually on Reddit or reading posts from my RSS reader app. I made a conscious decision to remove Facebook and Instagram from my phone a couple of years ago because I despise what these platforms have become (spoiler: they’re just data collection tools for marketers). And I don’t use Twitter. But I am still what I would consider a heavy user.

Generally speaking, though, I am very much in the minority here. Most people LOVE social media. According to data from HootSuite and We Are Social, there were over 3.4 BILLION active social media users in 2019 – up 9% from 2018. In addition, 52% of the earth’s population now use smartphones as well, thanks to huge growth in developing countries like India and Africa. From 2014, upwards of 1.9 billion people have started using mobile data.

Apps That Use The Most Data

OK, so we now know how mobile data works. But do you know what applications on your phone use the most data? If you’re on a limited data plan, it pays to know exactly which apps are using the most data. Right now, these types of application use the highest amount of mobile data:

Should You Go For An Unlimited Data Plan?

Given everything we’ve discussed, you’re probably thinking unlimited data is the answer to all your problems, right? In most instances, it is – unlimited data gives you the freedom to pretty do whatever you want on a mobile data connection. For instance, I used mine for an entire week to power my home computer while my home broadband was on the fritz. How much did I use? Around 126GB!

I’ve always had unlimited data. The reason? I use my phone ALL the time, and I don’t like limits. I also don’t mind paying for unlimited data either, as it is super-useful to have – especially if you travel a lot. Most people, however, will be fine on plans with 10GB of data. That’s a lot of data, even for heavy users, so don’t get too upset if your current network doesn’t offer unlimited data – just go with the highest possible allowance you can.

What Networks/Carriers Do Unlimited Data Plans?

In the UK and US, you have quite a few options when it comes to unlimited data plans. I’ve outlined the best networks and carriers for unlimited data below in the table: