Okay, this is a biggie: which mobile network in the USA is the best? Sprint, AT&T, T-Mobile, or Verizon? That’s a hard question to answer because there are so many ways to measure a mobile network operator. Does “best” mean the fastest speed? Most reliable uptime? Widest coverage?

Thankfully, we have a new report from the research and analytics firm OpenSignal who did an incredible deep dive into all sorts of metrics for America’s big four mobile operators. Here are the conclusions they came to.

OpenSignal says that Verizon has held its top spot when it comes to who has the most 4G availability. “Verizon once again led all operators in our 4G Availability metric, but after years of consistent growth across the industry in this metric, overall growth in 4G Availability has nearly ground to a halt,” OpenSignal says. “Verizon and T-Mobile are hovering just above 94% in 4G Availability while AT&T and Sprint were lingering right below the 90% milestone. We expect that any future gains in this metric will be incremental, especially as operators turn their attention to 5G rollouts.”

This one was a close race. Though Verizon and AT&T were nipping on the heels of T-mobile, that network still came out on top. “The pitched battle between T-Mobile and Verizon over download speed rages on,” OpenSignal said. “In our last report, the operators fought to a stalemate in our Download Speed Experience metric, but in this data collection period T-Mobile gained the advantage. It won our Download Speed Experience award with a score of 23.6 Mbps. In this report, though, the speed war gained a new combatant. Not only was Verizon right behind T-Mobile in our download speed analysis, so was AT&T.

The clear loser, however, was Sprint, with an average download speed of just 19.2mbps.

No surprise here. Not only did T-Mobile have the best download speeds, it had the best upload speed too. “The speed contest between Verizon and T-Mobile also took an interesting turn in our upload speed metrics,” OpenSignal says. “T-Mobile wrested the Upload Speed Experience award from Verizon in the current data collection period, having boosted its score by 0.6 Mbps since our last report. Meanwhile Verizon’s user’s Upload Speed Experience held steady at around 7 Mbps, keeping it competitive with the category leader.”

Once again, Sprint came in a distant fourth place with an average upload speed of only 2.4mbps–a third of the speed of the leaders.

Latency refers to the amount of time it takes to send information from one point to the next. The lower a latency speed, the better. And in this metric, AT&T came out on top by a fraction of a second.

“After a long stint as the sole title holder in our Latency Experience metric, AT&T wound up sharing the award with T-Mobile in this report,” OpenSignal said. “AT&T and T-Mobile users clocked overall network response times just below 53 milliseconds, putting them both ahead of Verizon and Sprint, which had Latency Experience scores over 56ms in our measurements.”

But if streaming video is the most important thing you do on your smartphone, you’re going to want to go with Verizon. OpenSignal found it had the best video experience of all America’s major networks.

“Video Experience is determined by many factors apart from speed, like the consistency of connections, overall network capacity, and network latency,” OpenSignal explains. “But one of the biggest contributors to the country’s lower video scores are the policies U.S. operators have introduced to manage mobile data traffic. Most of the major operators have restricted video resolution to varying degrees on their different tiers of unlimited data plans. Those restrictions often effectively force a device to downgrade streams to lower resolutions, which impacts Video Experience scores. Verizon seems to have found a happy — or at least a happier — medium that allows it to maintain a higher level of Video Experience while still limiting the outsized impact of mobile video on its network capacity.” 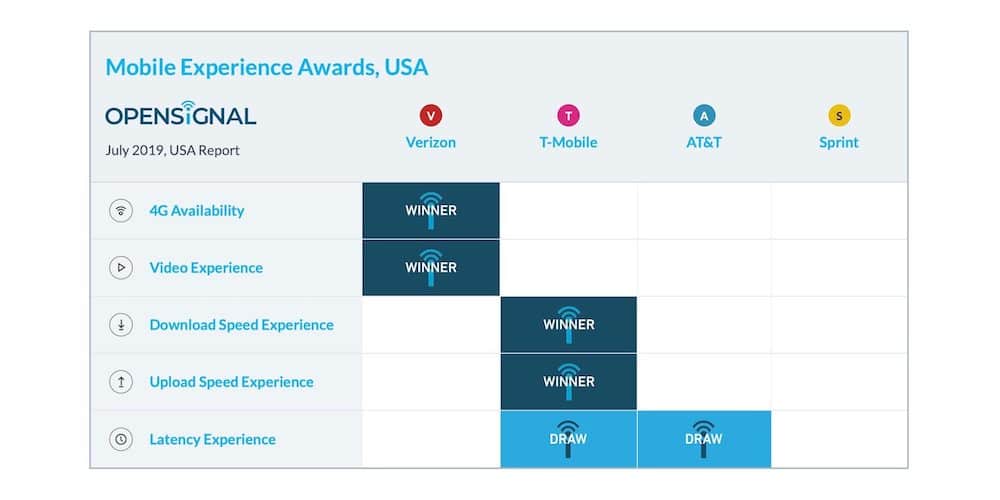 I highly recommend giving OpenSignal’s report a full read. It goes into an insane amount of detail about how it judges the USA’s mobile networks. While it found no clear winner, it did isolate the following factoids: