Apple makes a bunch of iPads these days, and they’re all slightly different with respect to size, dimensions, specs, and design. Here’s a simple size comparison chart to show you how they’re all different…

iPads are one of the trademark devices produced by Apple. In 2019, iPad sales generated up to $21.3 billion for the company making it the most selling product after the iPhone.

The Apple iPad used to be very similar to the iPhone; it ran the same software and, for all intents and purposes, was basically just a big iPhone.

However, things have shifted gears massively during the past couple of years. Apple has now started to differentiate the iPad from the iPhone through a ton of software and UX tweaks, making it more like a laptop than a large iPhone.

Thanks to iOS 15, the iPad now supports mouse, trackpads, and wireless keyboards.

Just like the iPhone, Apple has released various iPad models over the years since 2010 when the first iPad was released.

Here, we will be looking at all the iPad models that have been released since 2010, how they’re different, and what’s changed with regards to specs and hardware over the years.

By the end of this post, you’ll know everything there is to know about Apple’s entire iPad range.

iPad Sizes & How Each Model is Different

The major and most noticeable differences in Apple iPads are the screen size and dimension as you can see from the chart above. Here we’ll look at how Apple’s iPads are different with respect to specs and hardware:

iPad Sizes – From Biggest To Smallest…

Apple now makes a bunch of iPads, and they’re all slightly different sizes – from very large to super-portable. Let’s go over the iPad sizes for all of Apple’s major iPad models, starting with the biggest and best iPad Apple makes, the iPad Pro.

The iPad Pro (12.9in) model is the biggest iPad you can buy; it’s also the most powerful iPad too. There are also four iPad Pro 12.9in models in total to choose from – the first iPad Pro landed in 2015 and the most recent, the iPad Pro fourth generation, was launched in March 2020.

The latest iPad Pro models are the 2020 iPad Pro 12.9 and the iPad Pro 11, both of which are detailed above. You can still buy Apple’s older iPad Pro models, though you will have to do it through a third-party refurbished specialist like Gazelle – and you will save around 40% doing this too!

The iPad Air, launched in 2019, is Apple’s second-tier flagship. Sitting just below the iPad Pro in terms of pricing, the iPad Air is designed to offer a premium iPad experience, just without the imposing price tag of the iPad Pro.

The iPad Air is designed for pleasure, as a second screen to enjoy content on and the web, whereas the iPad Pro is designed as a work machine that also doubles as an awesome tablet.

The iPad Air, like the iPad Pro, however, does support the Apple Pencil, and you can pair wireless keyboards and mouse devices to it. The iPad Air just lacks some of the performance-punch you’ll find inside the iPad Pro.

The iPad is Apple’s entry-level iPad. It is designed to be cost-effective, powerful, simple to use, and is the one to go for if you’re after a relatively cheap Apple iPad.

The iPad does not pack in the same level of spec or hardware as the iPad Pro or iPad Air. This is why it retails for a lot less. It is still a great device, though, but it’s not quite as powerful as the iPad Air and iPad Pro.

If you’re just looking for a basic iPad, something to browse the web on, respond to emails, and run apps and games on, the entry-level iPad is a great option – it’s cheap, it runs all the same apps and games as the iPad Pro and iPad Air, and it looks gorgeous too.

The iPad mini is the smallest iPad Apple makes; it has a 7.9in display and is great for those that are looking for a more portable iPad option. The iPad mini will fit pretty much anywhere – from your jacket pocket to a purse. And this makes it a great device for those that travel a lot.

The iPad mini carries more or less the same specifications and hardware as the standard, entry-level iPad; you have 3GB of RAM, Apple’s A12 Bionic chipset, and up to 256GB of storage, though there is also a 64GB model available which is considerably cheaper.

The iPad mini is a popular choice with consumers that want a smaller second screen, something that is more pocketable and can be used with a single hand. The iPad mini is great for reading books on, browsing the web, playing games, and working/catching up with email on. It also supports the Apple Pencil too, so you can make notes on it as well.

What iPad Should I Buy?

Apple’s iPad comes in many shapes and sizes. You have several models to choose from at the moment: ]

The iPad is Apple’s entry-level iPad; it’s the cheapest option and is ideal for casual users. The iPad Air is designed for tablet users that want a slightly more premium experience than what you get on Apple’s standard iPad.

The iPad Air has better specs, a nicer design, and has more performance. It also costs slightly more too, though when you factor in its performance, this is to be expected.

The iPad mini is an odd one; it’s the smallest iPad Apple makes (it has a 7.9in display) and is only slightly larger than the iPhone 11 Pro Max (that phone has a 6.7in display). The iPad mini is fairly cheap too.

The iPad mini is ideal for users that want portability – the iPad mini will fit easily inside a bag or jacket pocket.

If you want a proper work machine, something that can replace your laptop, you’ll want to go with the iPad Pro. The iPad Pro is the most powerful iPad Apple makes; it supports keywords, mouse, and trackpads and, thanks to the latest build of iPadOS, it functions just like a MacBook.

If you want a machine you can work on and consume media on, the iPad Pro is essentially unbeatable. Even when you compare it to other hybrid PCs like Microsoft’s Surface X Pro.

As you can see from the table and comparison chart above, Apple has made a fair few iPads over the years. The iPad line-up, either its standard models or Pro models, are updated every year, although the iPad Pro models are updated at a slower rate. As of right now, Apple’s latest iPads are as follows:

If you’re in the UK, AO carries ALL of Apple’s latest iPad models (see the full range here). And for the USA, your best bet is B&H Photo – it has all models of the iPad, including older, cheaper models.

Alternatively, if you want to save 40% on the price of an iPad, you could go the refurbished route and pick one up via Gazelle – doing this will let you get a higher spec model with more storage for a lot less than buying new. And the refurbished iPads look and function as good as new. And check out Apple Pencil Tips & Tricks: Get The Most Out Of The Apple Pencil! 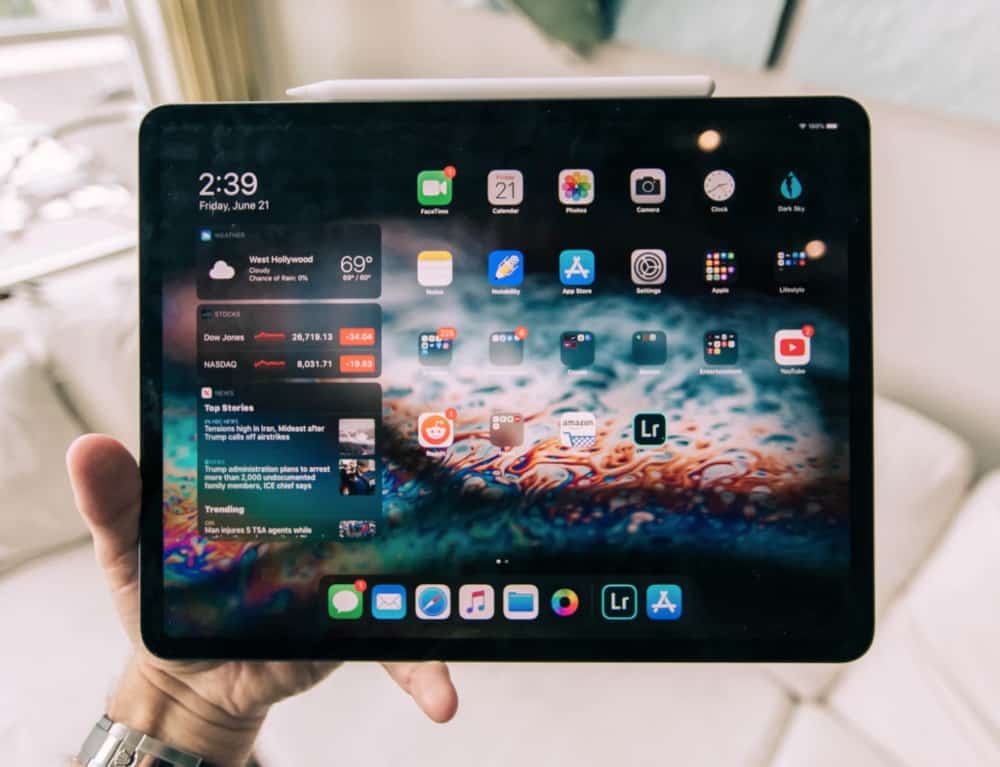