Google Stadia Latest News & Everything You Need To Know

Google Stadia is Google’s cloud-based gaming platform. Launched in 2019, Google Stadia has grown in popularity during the last 12 months. This guide lists all the latest Google Stadia news and a complete guide (below the news) for new, potential users…

Google Stadia will now function on mobile data, although gameplay, for obvious reasons, will be capped at 720p.

The server-side update took place earlier this week and was first picked up by a user on Reddit. Prior to the update, playing games on Stadia over mobile data was only available inside the application’s experimental options. 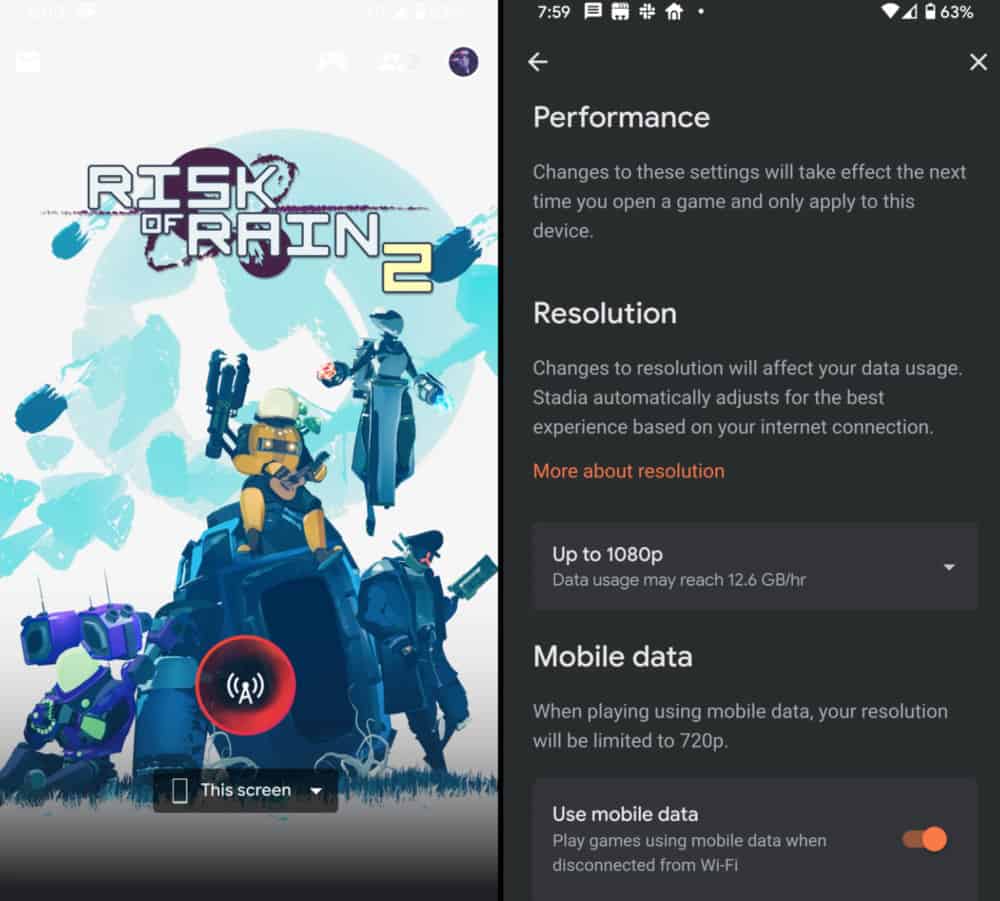 The rise and growth of 5G will give concepts like Google Stadia a huge shot in the arm. The increase in download speeds brought about by 5G will enable better gaming experiences on the move.

5G is now rolling out in the USA and UK, so the decision by Google to bring mobile data to Stadia’s streaming capabilities makes a lot of sense. As 5G progresses, expect to see options for 1080p Stadia streaming on 5G added in the not too distant future.

Just keep in mind that, should you start playing Stadia games over mobile data, it’ll soak up A LOT of your data – around 2.8GB per hour.

These changes to Stadia are included inside the Stadia v2.36 update which is now rolling out.

Google’s Stadia Controller has just got itself a stack of pretty tasty updates. The first, USB Type C headset support fine and dandy, but it is the second update that has got everybody talking.

Called Tandem Mode, the new update essentially adds in additional support for third-party hardware. With Tandem Mode, you can connect other controllers and hardware to the Stadia controller via USB Type C. 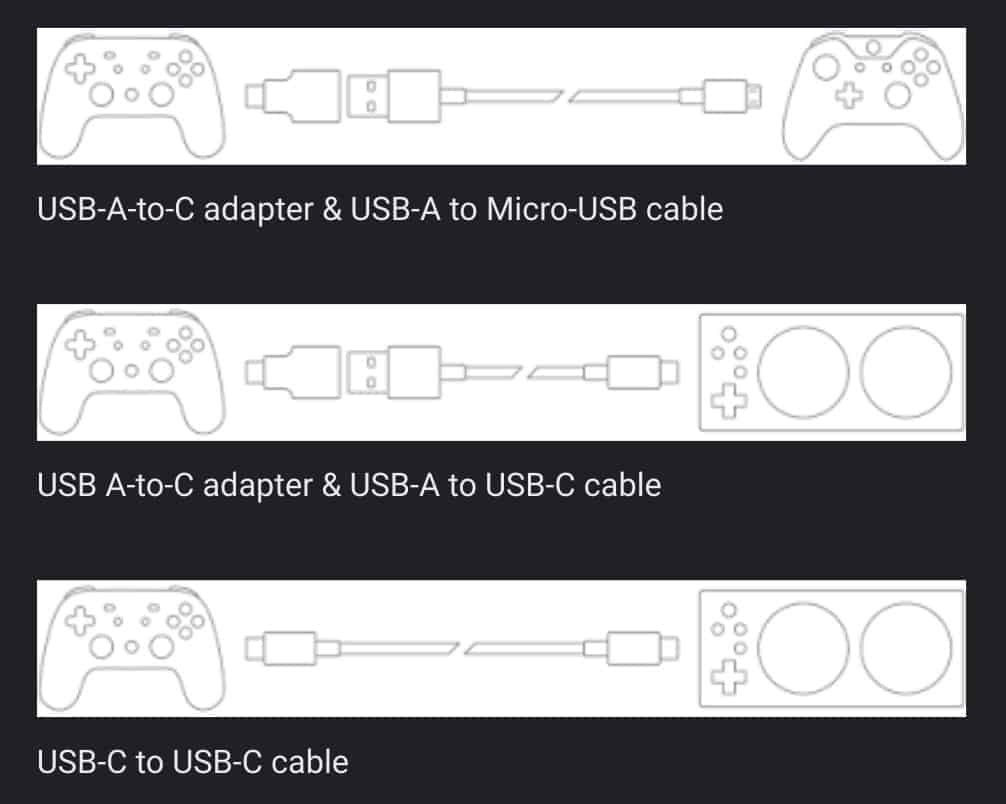 Currently in the experimental phase, Tandem Mode, once finalized, will enable Stadia players to connect things like steering wheels and guitars (for Guitar Hero) use play games via Stadia and a Chromecast connection.

Tandem Mode will also open up plenty of opportunities for more two-player style scenarios via Stadia. Here’s what Google said in its release statement:

When playing with your Stadia Controller wirelessly on any supported screen, you can also use the second controller at the same time to better accommodate your accessibility needs, either by yourself or collaboratively with a second player. Tandem Mode complements other accessibility features.

What Is Google Stadia?

Stadia is a video game streaming service that turns any device capable of running Chrome into a fully-fledged games console. Dubbed “the Netflix of games”, this service will remove the need to spend hundreds of pounds on expensive, dedicated games hardware every few years and instead allow you to purchase a subscription to play games or buy the software outright. Because all of the heavy lifting is being done on Google’s servers, you’ll be getting a truly cutting-edge experience without having to spend an insane amount of cash on a top-of-the-line gaming PC rig – and the best thing is that (in theory) the visuals will get better as the years progress, as Google will be constantly updating its server tech to provide the best possible graphics.

What Do I need to Run Google Stadia? You probably already have everything you need to run Stadia. The service is designed to stream via any device capable of running Google’s Chrome browser, so that could be your laptop, tablet, computer or smartphone. Google is launching a special dedicated app for its Pixel 3 device, but says this will come to other smartphones in the fullness of time.

While Google is launching a dedicated Stadia controller (more on that in a moment), you can use a wide range of wireless and USB pads, as well as mice and keyboards. If you want to use Stadia on your TV and don’t have a device connected that is capable of running Chrome, you can buy a Chromecast UItra and connect that instead.

How Much Will Google Stadia Cost?

If you want to get in on the action the moment Stadia launches in November 2019, then you’ll have to pony up £119/$129.99 USD for the special ‘Founder’s Edition’ bundle. You’ll get a Chromecast Ultra for 4K and HDR streaming as well as a limited-edition Night Blue Stadia controller. The bundle also includes a three-month subscription to Stadia Pro and a three-month Stadia Pro ‘Buddy Pass’ sub for a friend. On top of all of this, you’ll get to pick your Stadia username nice and early. A Stadia Pro account also gives access to free games, as well as discounts on other premium games. One of the first offers is access to the full Destiny 2 suite of content.

Next year, 2020, Google will also launch the free Stadia Base service. This will be limited to 1080p/60fps with stereo sound.

How Do I Buy Games On Google Stadia?

The Stadia Pro sub will give you access to free games each month, just like Sony’s PlayStation Plus and Microsoft’s Xbox Live Gold. However, the majority of the games you play you’ll have to purchase outright, the old-fashioned way. When you buy these games you’ll own them forever (well, ‘forever’ in digital terms – they could still be removed from distribution by the publisher or Google at any point) and will be able to play them on any device capable of hosting Stadia. Your progress will be saved across devices, too.

What Games Are Confirmed For Google Stadia?

Google has said that many companies have signed up to release their titles on Stadia, and the vast majority of games announced so far as existing titles that are already available elsewhere. However, exclusives are promised – Gylt, from the developer of Rime, is one of the first to be confirmed – so expect to see some games appear that will only be playable on Stadia.

What’s So Special About The Stadia Controller? Unlike most wireless pads, which connect to your console via Bluetooth, the Stadia pad uses Wi-Fi to link directly to your game of choice running in Google’s data centre. That means your inputs are feeding directly into the servers that are playing your game, and that cuts down dramatically on latency. The pad charges via a USB-C port and has a 3.5mm headphone socket for voice chat. You can also take screenshots and capture footage with a dedicated button. The pad comes in Midnight Blue (exclusive to the Founder’s Edition bundle), Just Black, Clearly White, and Wasabi, and will cost £59/$69 each.