Gaming will never be the same

GDC 2019 has just kicked off, and Google has effectively stolen the show with the announcement of its Stadia cloud gaming service, which launches later this year and promises to revolutionise the way we play games. It’s not a games console that costs hundreds of pounds, but instead allows you to transform almost any screen into a gaming platform. Here are five ways we think Stadia is going to be a game-changer (no pun intended).

No More Hardware – Every Screen Could Become A Console

The current games market is built around the idea of buying a new gaming system every five or so years, at an initial cost of around £300-£400. This massive investment buys you the latest tech so you can enjoy cutting-edge games; each hardware cycle brings new features, functions and possibilities, but it’s a huge barrier of entry to some players who simply can’t afford that massive investment from day one. Those individuals usually wait until the price of the console has dropped, by which point they’re already deep into its life cycle and therefore closer to when its successor will be released.

Stadia snaps the industry out of this costly cycle. By keeping all of the computing power server-side, Google can scale the tech as time goes on, as well as offer processing grunt right now that is many times more impressive than what the PS4 and Xbox One can muster. While the company has yet to reveal how it will make money off this venture – we could see a monthly subscription that grants access to all available games, or a more traditional ‘pay per game’ system – but the barrier to entry will be massively reduced. All you’ll need is a compatible controller (Stadia has its own WiFi-based pad, but you can use wired USB controllers too) and a device capable of running Chrome.

With support across mobiles, tablets, laptops, TVs and even Chromecast, Stadia is everywhere. You’ll no longer be limited to playing only when you’re home, or when you have your handheld console to hand. Any screen can become your playground.

Those of you old enough to recall those evenings hunched in front of your tiny CRT telly playing split-screen Super Mario Kart or taking on all challengers in Street Fighter II will know that you can’t beat the feeling of going up against someone close enough to punch. That’s been lost in recent years with the rise of online gaming, while ‘local’ multiplayer – which, in many cases, uses split-screen to allow several players to take part at once – has fallen by the wayside. One of the big reasons for this is that split-screen puts an incredible strain on the console, as it effectively has to render the same scene up to four times over. Google’s Stadia overcomes this via Stream Connect, which allows you to place several different steams into the same screen, all running at full speed with no lose of performance. This leads to other cool features, such as the asynchronous multiplayer, where one individual can act as a ‘guide’ while the other three do all the killing.

Nintendo has done much in recent years to bring back the idea of local multiplayer with its Switch console, but Google’s Stadia takes that concept and really runs with it – offering the best of both online and local play.

No More Waiting, Ever

What’s one of the worst things about modern gaming? Chance are, most of you will have answered ‘the updates’ to that question. If you leave your console alone for a few weeks, when you fire it up you usually have to wait for system updates to install, and then when you boot up a game, that often needs updating too. A quick half-hour gaming session soon becomes taking up with progress bars, and it’s super annoying.

Stadia doesn’t need updates; games are updated in the cloud automatically as soon as the update is pushed out, so you can hop right in without having to stare at a blank screen.

You’ll Never Get Stuck In A Game Again 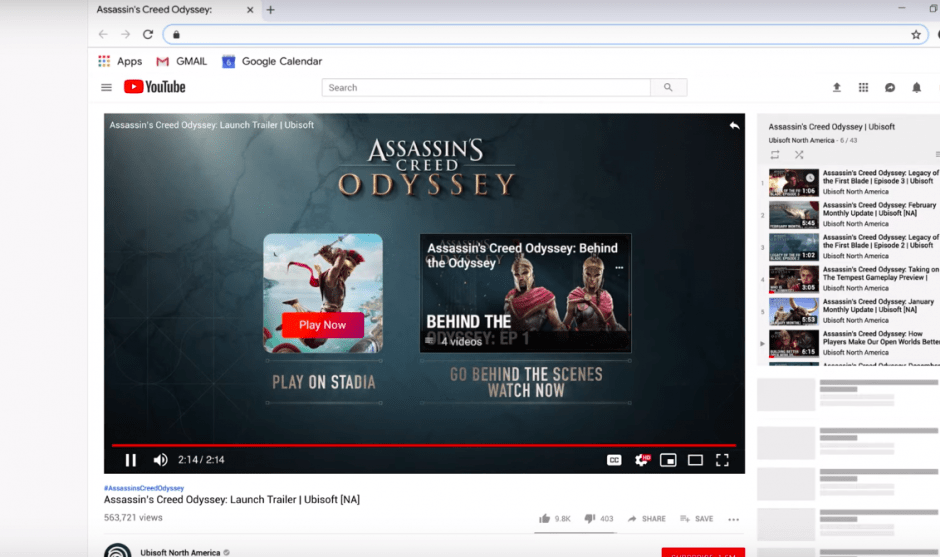 There’s nothing more frustrating than getting tens of hours into a game and getting hopelessly stuck. The games we play today are so massive and full of content that it’s easy to miss things or hit a roadblock, and the solution is usually to hit the internet and search for tips on websites, forums or social media. Stadia solves this by allowing you to hop into guides specific to the section of the game you’re in right at the point you get stuck. This immediately extends to other parts of Stadia, too; if you’re watching a game trailer on YouTube you’ll have the option at the end to jump right into the game on Stadia. There’s also a feature which allows streamers to invite those watching on YouTube directly into their game. All of this is pretty massive as you can imagine, and could change the way we play and watch games forever.

Google Is Serious About Making Its Own Games

Platform holders like Sony, Microsoft and Nintendo are keen to keep you tied to their respective consoles via format exclusives, and Google is no different – it has established Stadia Games And Entertainment as its internal first-party studio, headed by Jade Raymond, who has worked on many million-selling titles in the past (including Assassin’s Creed). Phil Harrison is also involved; you might remember him from the launch of the original PlayStation back in 1994, and, more recently, he was at Microsoft. The message is clear: Google is taking this very seriously indeed.

Of course, Google knows that you also need third-party support to succeed, and it is courting some of the biggest publishers in the business. Ubisoft and id Software have already pledged support, and we’d imagine they are just the beginning – with very little additional legwork involved on the development side, there’s plenty of incentive for publishers and developers to port their existing games to Stadia. While we don’t know for sure, we’d imagine that licence fees will be less than what Sony, Microsoft and Nintendo currently charge, as the consoles sold by those companies require physical copies to be manufactured.