Can Apple Watch Measure Blood Pressure? No, But It Will Soon…

The Apple Watch has developed rapidly over the past several years, so much so that many insurance companies now subsidize it for their clients. But how long will it be until Apple Watch can measure blood pressure?

High blood pressure is something that affects millions of people, with new sufferers emerging every day. If you’re young – and relatively healthy – the idea of having high blood pressure might seem unlikely, but it can (and does) happen.

This is why your doctor ALWAYS tests your blood pressure at check-ups.

The only question now is when we’ll see this feature arrive on Apple’s uber-popular wearable.

Apple has not one but TWO patents for accurately measuring blood pressure on Apple Watch. The first patent relates to an inflatable Apple Watch strap that can be used in conjunction with the Apple Watch’s internal sensors to measure blood pressure.

Apple noted the following inside the patent filing: “A low-profile blood pressure measurement system and methods of use are disclosed. The system includes an expandable member that has a multi-compartment structure and/or is mounted on a rigid surface or structure. The system may be incorporated into a portable electronic device, or maybe configured for use with, or to otherwise communicate with a portable multi-function device.”

The second patent relates to the means of recording data inside watchOS and then sharing it with iOS on the iPhone. The application will be able to provide reminders on when to take measurements, log data of previous recordings, and allow the user to keep tabs on the ups and downs of their blood pressure over weeks and months at a time.

How Does The Apple Watch Blood Pressure Strap Work?

Like traditional blood pressure machines, the Apple Watch strap detailed in the patent will use pressure to constrict and release the blood vessels and arteries in the wrist of the user to take readings on the user’s blood pressure. The strap will feature an array of expandable elements inside the strap that are used to inflate to create pressure and deflate to relieve pressure. 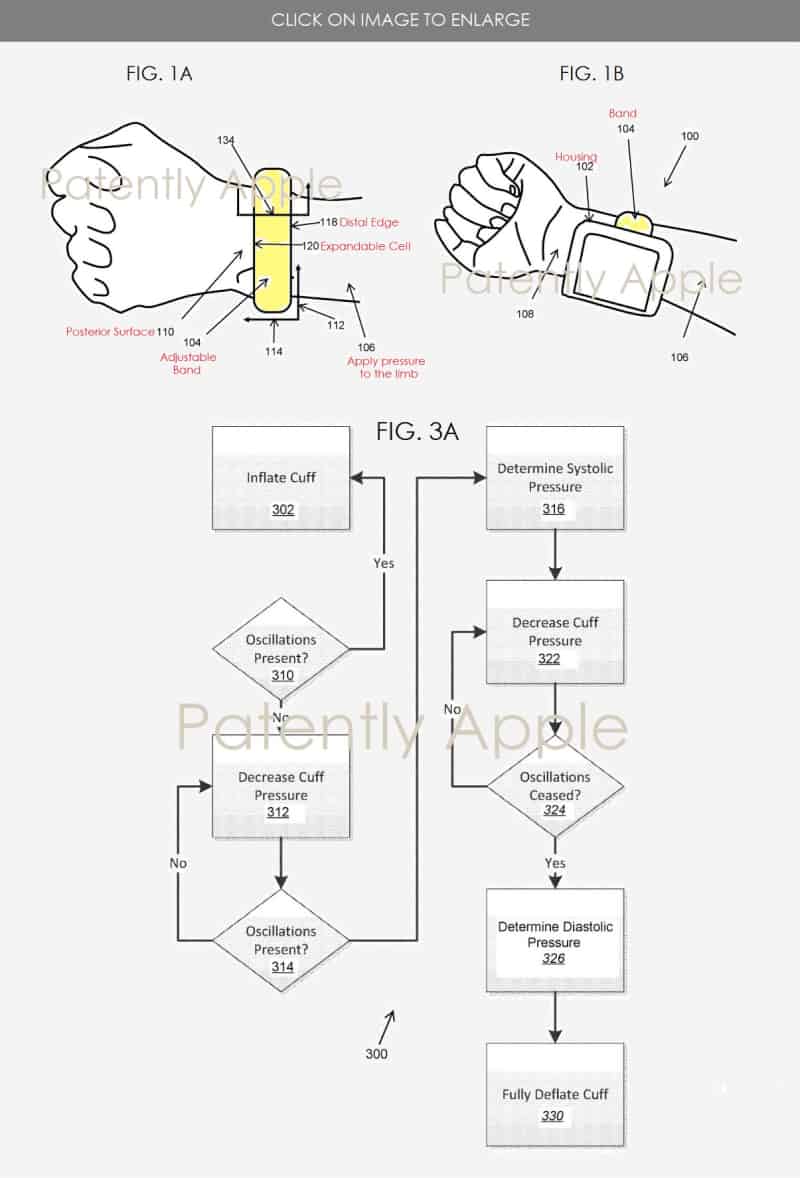 Apple will use the applanation tonometry method for measuring blood pressure, rather than the oscillometric method. And the reason? Simple: because the Apple Watch is worn on the wrist, so Apple needs to take its measurements lower on the arm than more traditional blood pressure machines.

“In the applanation tonometry method,” notes Patently Apple, “a pressure sensor is placed against an artery to slightly flatten the artery against the underlying anatomical structures, so the pressure waveform can be directly measured. The central venous pressure and the systolic and diastolic pressures can then be determined from the waveform.”

When Is This Coming To Apple Watch?

These patents were filed in 2017, so Apple has now been sitting on this technology for a few years now. Could we see Apple Watch measuring blood pressure inside the next year or two? It’s possible. But Apple will want to make sure the apparatus that makes this possible works 100% correctly – and that could prove tricky. It’ll also need to do thousands of hours of real-world tests to make sure the data it records is accurate.

On top of this, Apple will have to find a way to convince people to ditch their traditional, medically backed blood pressure measurement units in favor of a new strap for their Apple Watch. Finally, Apple will need to assess whether there is even demand for such a thing. I mean, most people might be fine with their current blood pressure measurement setup and not want to pay $100-$200 for an Apple Watch accessory that might not be as accurate.

Get Bespoke Bands For Your Apple Watch (For Less) — Series 1 to Series 5 Compatible!