One of the best things about the PS5 is Sony’s new DualSense controller, it is truly brilliant. But is the new Scuf Reflex a worthy replacement? Let’s check out all the latest Scuf Reflex reviews to find out…

Scuf made its bones by essentially beating Sony at its own game: it designed and released controllers for the PS4 and PS3 that were as good as, and in some cases, better than Sony’s default controller that shipped with the console. Scuf’s attention to detail and a keen eye for useful additions made it a household name in the gaming world.

With the Scuf Reflex, Scuf has come to the table with something that it believes can upstage Sony’s very well-received DualSense controller for the PS5. It brings with it myriad customization options, and great paddles, and is essentially aimed at piquing the interest of pro and aspiring pro gamers – or, anyone that is looking for an edge over their competition. That’s a pretty tall order. But if anyone can pull it off, Scuf would be the brand you’d bet on.

What’s more, because the Scuf Reflex isn’t necessarily designed specifically for the PS5, you can also use it with a PC too. The controller has fully customizable paddles and users can load up to three user profiles onto it, so you could have a profile for your PS5, one for your PC, and another for your better half or brother or sister. Pretty cool, right? The downside is that none of this comes affordably; the Scuf Reflex is a premium-end, pro-level controller. And it is priced like one too with prices starting at £199/$199.

The main difference between the Scuf Reflex and the PS5 DualSense is that the Reflex comes with paddles (back buttons) that you can assign commands to, so, for instance, you can use them for jumping or reloading which means you free up the face buttons and never have to take your thumbs off your analog sticks – this can and will improve your gaming efficiency and could give you an edge over opponents.

All of Scuf’s Reflex models come with interchangeable thumbsticks, remappable paddles, and support three player profiles. The more expensive models feature improved haptic feedback and advanced grip coatings that are designed to aid in usability. For most people looking for an edge, however, the standard Scuf Reflex will more than suffice – it has everything the standard PS5 DualSense has plus the addition of swappable thumbsticks, customization paddles, and support for three player profiles.

Scuf’s controller is a superb entrant to the market and, in our view, should be the default choice for most players looking for a major upgrade. Its customization options are really excellent, but the stock controller is a great bet, as well.

The addition of paddles makes for huge leaps forward in terms of control scheme options – and the ease of reprogramming them shouldn’t be overlooked – while offering different profiles for your layouts is another superb touch.

Between how much control you have over its looks and how you use it, the Reflex could be a seriously potent tool in the hands of an aspiring professional gamer – or just someone who wants to get a leg-up on the competition in public servers.

We wish it came a little cheaper, but, still, this might just be the new standard-setter for those trying to go the extra mile on PS5.

In the end, the SCUF Reflex is a slightly leveled-up PS5 DualSense. That is to say, it’s managed to improve on Sony’s excellent hardware, if only by slim margins, but the margins do exist.

Whether or not consumers think remappable paddles, swappable thumbsticks and some extra grip are worth more than half the price (literally!) of a digital edition PS5 console will determine the Reflex’s viability. For reference, a standard DualSense retails for around $69.99. For further reference, that is way cheaper than any version of the Reflex, and the stock gamepad does most of the same things.

There must be a market for these kinds of controllers, though, because SCUF keeps pumping them out. For me, it’s a tough sell, not because the Reflex isn’t a commendable peripheral (it absolutely is) but because the value proposition is a bit weak. For something closer to $100, this would be a must-buy. As it stands, I can only recommend this to SCUF diehards and gamers with deep pockets.

Having paddles on a controller isn’t for everyone, but it’s one of those things you may not be able to live without after you’re accustomed to it. And for people who have never bought a controller like this, you may only realize what your preference is by trying it out. It’d be easier to recommend that more people give it a try, if only the $199.99 starting price for Scuf’s Reflex wasn’t so high. And unfortunately, with practically no wireless alternatives to the DualSense currently available, Scuf charges more for these extra features than they’re worth.

Scuf knows how to make already-good controllers a little better. But these prices only serve to keep most players from being able to experience them. In the absence of other equally customizable options, I still can’t recommend this to most people. I’ll just sit here, crossing my fingers, and hoping that Sony will eventually make a PS5 version of its Back Button Attachment, or an even more premium wireless controller of its own that costs less than this one.

Do you need more «pro» in your controller? The Scuf Reflex Pro does what it says on the tin. Thanks to better grip, extra paddles that you can practically assign anywhere, and removable analog sticks, you have more control over your games. Does it make you game better? Maybe. For me, the main benefit is that it’s customizable. The four extra buttons provide more flexibility and don’t require as much finger gymnastics.

Without a doubt, the Reflex Pro feels like it’s better finished than the normal Dual Sense controller. The problem is the price tag. For 250 francs, I expect more than a few paddles and increased grip. 100 francs less would bag Xbox players (and PC players) the Elite controller. It sits just as well in your hand.

Not only does it let you make more adjustments, but it’s also easier to do so. That’s what makes it difficult to recommend Scuf’s controller. That being said, there aren’t many alternatives to a Pro controller in Dual Sense design. Assuming the price tag doesn’t put you off, when you invest in the Reflex Pro, you get a top-quality controller. But for everyone else, the wait for Sony to release its own Pro controller continues.

The Scuf Reflex Pro is a nice upgrade to the stock DualSense, but it isn’t a very significant one. Of course, Sony already packed a startling number of advanced features into its PlayStation 5 controller, and maybe there isn’t much further it can be taken. The rear paddles are convenient, and the swappable thumbsticks are pleasantly textured.

Otherwise, the Reflex Pro is nearly indistinguishable from the DualSense. That doesn’t really justify spending more than three times as much as the DualSense, especially when the Reflex Pro doesn’t come with a case, and lacks an app for more extensive customization.

Still, there are no gamepads besides the Reflex and Reflex Pro that do everything the DualSense can do, and that makes them worth considering if you want a rear-bumper upgrade to the standard PS5 controller.

If you want to game on Xbox, the Xbox Elite Wireless Controller remains one of our favorites, and the 8Bitdo Pro 2 stands as our pick for Nintendo Switch gamepads. The Elite has more swappable parts and a case, while the Pro 2 costs less than the standard DualSense.

Both controllers have apps for even more tweaks, and can be used on PCs without relying on driver wrappers or customization modes.

For PS5, though, your choices so far are the DualSense and the Reflex.

Is The Scuf Reflex Worth It?

For casual gamers, I think there is plenty of scope for switching from the standard DualSense to the Scuf Reflex. The base model, while still pretty pricey, adds in a bunch of useful features that will improve your gaming performance – most notably its customizable paddles. You can also change the thumbsticks, which enables you to experiment with different styles and grips. Again, this is something that could make a difference in how you play, so if you’re looking for an edge, perhaps this is the best way to achieve it.

For more serious gamers, you have the Pro and FPS models in the Reflex range. These are quite a bit more expensive than the standard Scuf Reflex model, but they do bring some pretty novel features that more professional gamers will love compared to the standard DualSense. Again, the only time these more expensive models will be worth it is if you’re a serious or aspiring professional gamer. If you’re not, just stick with the standard and very good DualSense or go with the excellent Scuf Reflex base model controller.

I love the fact that, with the standard Scuf Reflex, I can customize the paddles to whatever I want on a game-by-game basis which frees up the four-face buttons. This makes life a lot easier in a variety of games – you can use the paddles for jumping, cover, reloading, whatever. And because there are three player profiles, you can essentially tweak the Scuf Reflex for three games at a time which is a great time-saving feature. Would I buy the Scuf Reflex just for this ability? Yes. I think it is well worth the asking price. It does improve performance and, when it comes to controllers, that’s all that matters, right? 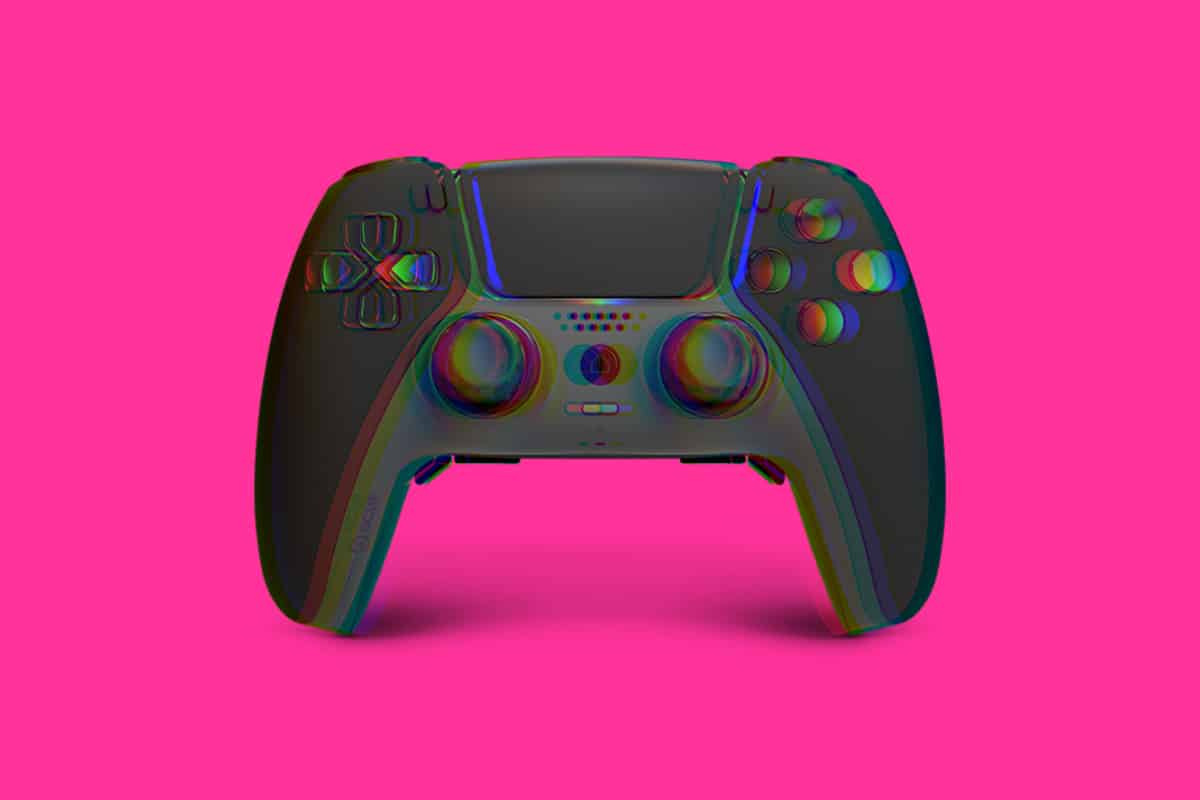 Are PS5 Controllers Compatible With PC?

If you’ve managed to get hold of a shiny new PS5 console but still intend to play particular games on your PC instead, you might be interested to know whether or not you can use your new DualSense controller… Are PS5 Controllers Compatible With The PS4?

There are several reasons why you may be wondering if your PS5 controller will work on your PS4 and we’re here to provide you with answers. A selection of some of the best PS5 accessories you can buy right now, covering off headsets, external storage, charging stations, and remote controls…