iPhone XR vs iPhone 8 – How Do They Compare?

iPhone XR vs iPhone 8 – which will win? Which is best? We compare two VERY different iPhones to see if either is worth buying in 2021. Let’s do this…

In this context, however, the overall, better phone is the iPhone XR; it’s bigger, has 50% more power, better battery life, and it features Apple’s latest software tweaks inside its camera app. The iPhone XR is the #1 best selling iPhone of the last few years, and the reason for this is simple: it retails for a lot less than Apple’s flagship models, yet still delivers excellent performance and design.

The iPhone 11 is the successor of the iPhone XR and for this reason, the iPhone XR can now be picked up for a lot less than when it first launched. This applies to the iPhone 8 too, though we would always recommend the iPhone XR over the iPhone 8 – it’s just a superior device in every way, from battery life to overall performance and looks.

The iPhone XR will also be supported by Apple for longer; the iPhone 8 only has a couple more years of updates at best.

Winner? iPhone XR – It’s a work of art compared to the 8.

Winner? Draw – Both phones feature the same front and rear cameras. However, the XR does have a few more software features, which you might not use much.

Winner? iPhone XR – It Has Better Battery Life Than iPhone 8 and it has wireless charging.

When it comes to design, display, and processing power, the choice is clear: go with the iPhone XR. It’s the more modern of the two phones and its power as a workhorse can’t be beaten by the iPhone 8. However, do keep in mind that while the iPhone XR has a better display, that display also lacks 3D Touch. If you’re a fan of that, you’ll want to get the iPhone 8.

But besides that 3D touch feature, there’s little the iPhone 8 offers besides a cheaper price point and, well, that’s it. The answer is clear: go with the iPhone XR. And, as an added bonus, you can now pick up the iPhone XR for just $288 via Verizon.

The iPhone XR is also 50% faster than the iPhone 8, thanks to its uber-powerful A12 Bionic processor.

The iPhone 8, back when this post was first published, still had a lot of value. But as we move through 2021, the iPhone 8 (and the iPhone 8 Plus) is now starting to show its age. And this is important to consider. Why?

Because the iPhone 8 will soon stop getting iOS updates. Apple no longer supports the iPhone 6 and iPhone 6s. The next phone on the chopping block later this year will be the iPhone 7 and then, next year, the iPhone 8.

Meanwhile, the iPhone XR, like the iPhone X, will be getting iOS updates for at least another several years – maybe more. You also get access to Apple’s newer features (FACE ID) with the iPhone XR. And a larger display too.

From a value for money perspective, I honestly do not think the iPhone XR can be beat right now – it currently retails for less than $300. Yes, this is for a refurbished unit, but that’s no big deal; they look and function as good as new.

Bottom line? If you’re on a budget or just want to cut down your costs, while still using an iPhone, the iPhone XR in 2021 could be just what you’ve been looking for. Hell, I’m even tempted by this Verizon offer…

And here’s the specs for the iPhone 8:

By many aspects, the XR beats the 8: it has a larger display with a higher resolution, a higher pixel density, and is edge-to-edge. But not so fast, the iPhone 8 beats the XR in one display aspect: the XR lacks 3D Touch, which the iPhone 8 has. If you were never a fan of 3D Touch, that won’t matter much. But if you like the feature you’ll be disappointed it’s not in the XR.

The iPhone XR has a MUCH larger battery than the iPhone 8. You’ll definitely see a difference because of it. Just check out the battery life specs below to see what we mean. Here’s how the battery life compares between the two in Talk Time, Standby Time, Internet Use, Video Playback, and Audio Playback:

Both phones also feature wireless charging. As for storage, the XS offers three sizes: 64, 256, or 512GB. The iPhone 8 only comes in 64 or 256GB. As far as the CPU is concerned, the new XS has a better processor than the iPhone 8.

Finally, the Neural engine now has 8 cores for machine learning and is almost 10x faster. Apps launch 30% faster on the XS and Machine Learning runs nine times faster on 1/10th the energy. In other words, the A12 Bionic absolutely flies.

When you get to the camera department, the two phones aren’t THAT different. On the front camera, both phones feature the same 7MP sensor, but the front camera on the iPhone XR is a TrueDepth system that supports Face ID. It also supports advanced photo features like portrait photography.

The red camera is also almost identical. Both feature a single-lens 12MP wide-angle camera. Both also feature optical image stabilization and 4K video recording. The XR does have some extra software features, however, like Portrait mode with advanced bokeh and Depth Control and Portrait Lighting. 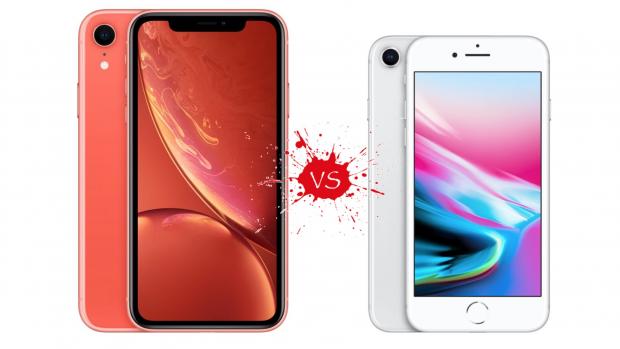