Do you still use cash? What about a physical credit or debit card? Right now you’re still in the majority, but that’s changing fast. In 2018, 55 million people in the U.S. used a mobile payment method – that’s 20% of the population. And that number is expected to increase from here on out until a majority of people pay for items with their mobile phones by the middle of the next decade.

That’s why everyone from Google to Samsung to Apple has gotten in on the mobile payments game. Apple was one of the leaders in the field, introducing Apple Pay in 2014.

Apple Pay is a payment platform that allows you to make payments from ALL your bank accounts without having to carry cards or cash. The benefit of Apple Pay is that you can store multiple cards (debit and credit), as well as coupons, vouchers, and plane and train tickets, on your iPhone and Apple Watch and then simply use your iPhone or Apple Watch, rather than a physical card or ticket, to pay for things (or board a plane).

As Apple Pay turns six this year, we take a look at everything you need to know to get started with Apple’s mobile payment solution.

What Is Apple Pay? When Tim Cook introduced Apple Pay in 2014 he stated that most people use credit cards, but added: “[they’re now a] fairly antiquated payment process” that is almost 50 years old. Speaking about a credit card’s drawbacks Cook said, “We’re totally reliant on the exposed numbers and the security codes that all of us know aren’t secure. It’s no wonder that people have dreamed of replacing these for years. But they’ve all failed.”

But really. It’s all about the Benjamins…

With over 200 million credit card transitions a day in the US alone, Cook said the payment transaction area was ripe for Apple’s innovation. Innovation is one thing, but the advent of Apple Pay stands to net the company billions of dollars in revenue too. According to a report from Bloomberg, Apple receives a fee for every Apple Pay transaction, which means the company will get a share of the more than $40 billion bucks generated each year from credit card transactions.

Apple makes around 15 cents per every $100 spent via Apple Pay. With this figure in mind, Apple Pay users would have to spend $451 billion for Apple to make even close to 1% of its total quarterly profits. Again, Apple Pay does make Apple money, but it is no way near the same amount as it does from its iPhone and iPad business.

Sanker points out that Apple’s Apple Pay and Apple Card have posted 100% year and year growth which is extremely impressive given the competition in the fintech niche.

“While Apple has portrayed these digital services as complementary to its mobile hardware platforms, we believe future scaling out of these services globally coupled with increasing depth and sophistication of them could position Apple as an emerging contender in the fintech space,” Sankar writes.

Apple Pay, by 2023, with growth potential in Europe and elsewhere, will enjoy 18% compound annual growth. And Apple Card, which got off to a slower start, has the potential to take over as Apple’s #1 fintech product by 2023, generating the company billions in revenue.

Not bad, especially when you consider that Apple receives an estimated 1% fee for EVERY transaction made using its Apple Card. Apple will only need 2-3% market penetration to generate billions in revenue from the Apple Card. And it looks as if the company is well on track to adhesive this by 2023.

What Devices Does Apple Pay Work With? 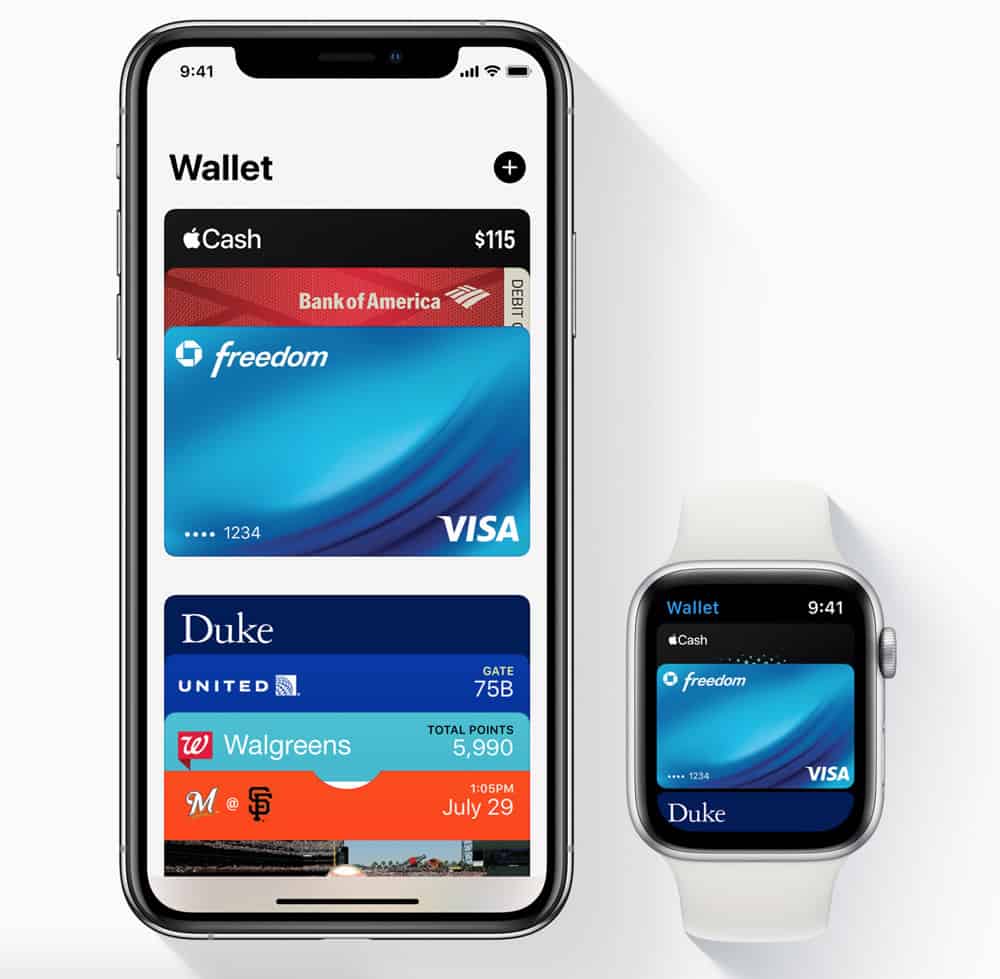 Virtually every device Apple makes, including devices with Touch ID and Devices with Face ID.

How Do You Set Up Apple Pay For Use With A New (Or Additional) Credit Or Debit Card?

Setting up Apple Pay to use your credit or debit card is easy.

Apple Pay has been around for a while now, and millions of people use iPhones, so most major banks in most countries now support Apple Pay. If you’re in the UK, Europe, or USA, and Canada, you should not have any issue with setting up Apple Pay with your bank. If you want to double-check if your bank supports Apple Pay, you can do so using the following links:

How Do You Use Apple Pay?

When you want to pay for a product at a contactless terminal, simply take your iPhone out and bring it up to the NFC reader at the till. There’s no app to launch – your iPhone will know you’re making a payment. The screen will show you the total amount and the card you are using.

To confirm the payment, simply place your finger to the Touch ID or scan your face with Face ID to authenticate the transaction.

Within seconds the transaction is complete. What’s crazy is you don’t even need to look at the screen to know your payment went through. The iPhone produces a subtle vibration alerting you it has.

Are There Limits on How Much You Can Spend With Apple Pay?

With Apple Pay, you can spend as much as you like, so you could technically go out and buy a brand new Tesla using it, so long as you had the funds to back it up!

This makes Apple Pay far superior to normal contactless payments; you can now use your Apple Watch and iPhone to pay for things like weekly shops, big petrol refuels for your car, and even expensive items like new technology products and jewelry.

What Payment Choices Do I Have Using Apple Pay?

With Apple Pay, you can simply use the credit card you have on file with your iTunes account or you can use the Wallet app to take a photo of any Visa, Mastercard or American Express card you own. The Wallet app will pull out all your card details and confirm them with your bank. The card – it can be a debit or a credit card – is then added as a payment method.

How Does Apple Pay Work?

For app and web-based purchases, Apple Pay does not require an NFC chip – only Face ID or Touch ID, which is why transactions can be completed on iPads and Macs. To use Apple Pay for making in-app purchases, tap the Apple Pay button in the app and then place your finger on the Touch ID, or scan your face with Face ID to confirm the purchase.

Yes. Once you’ve added all your payment cards their numbers are actually no longer stored in your iPhone, iPad, or Mac. Instead, a unique Device Account Number is assigned to each payment method and encrypted and securely stored in a new coprocessor called the Secure Element. The rest of the apps on your devices have no access to this Secure Element chip, so your payment details are always safe. Further, even if someone accessed your phone, they couldn’t approve a transaction without your fingerprint. 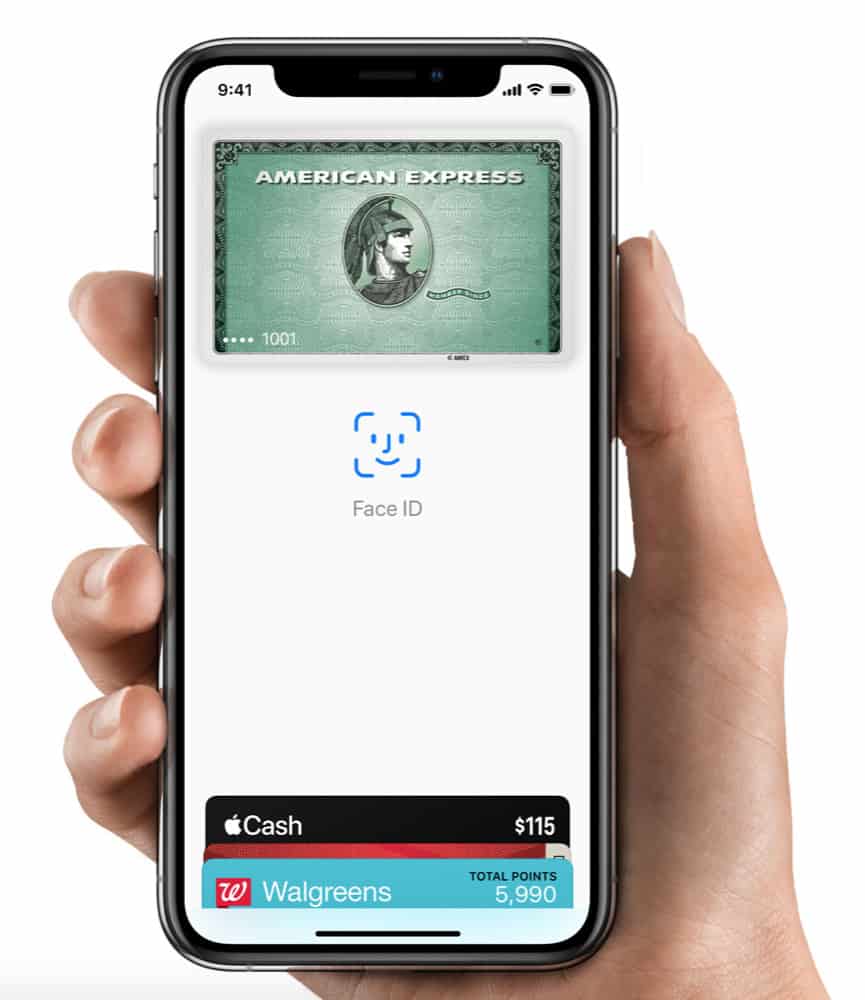 What’s more is when you make a payment using Apple Pay, the Device Account Number of your payment method is combined with a “transaction-specific dynamic security code”, which means the merchant never even gets access to your credit card number–or even your name. As for Apple, the company says it has absolutely no access to your payment information (with the exception of the card associated with your iTunes account) because all your payment information stays locked in the Secure Element chip and is never sent to Apple’s servers.

What If You Lose Your iPhone and/or Apple Watch?

If you have a bunch of store cards associated with Apple Pay, things like your personal debit card, your business cards, and your credit cards, you would be forgiven for freaking out if your iPhone or Apple Watch gets lost or stolen.

But fear not: Apple Pay runs on biometric encryption, so even if someone does find your iPhone or Apple Watch, they would not be able to use Apple Pay to pay for anything – it simply would not work.

On top of this, the moment you know your iPhone or Apple Watch is lost, you can go straight to Find My iPhone and ensure the phone is completely wiped, removing all your details, contacts, and accounts from it. This works for all Apple products too – from MacBooks to the Apple Watch.

Bottom line? If you lose your iPhone, and it has Apple Pay installed on it, do not fret. Just go to Find My iPhone and follow the steps to wipe the device and then be sure you call the police if you believe it has been stolen.

Where Can Apple Pay Be Used?

Apple Pay currently works in dozens and dozens of countries around the world. It works in both stores and online. In stores, you can use Apple Pay virtually anywhere that takes contactless payments. In the U.S. popular stores that accept Apple Pay are Macy’s, Starbucks, McDonald’s, Apple Stores, Nike, Disney Stores, PetCo, Whole Foods, and more.

Apple Pay is also capable of making transactions in apps, which makes paying for services in third-party apps much more secure. Supported apps include Uber, Target, Tickets.com, Panera, OpenTable, and Groupon, among many, many others.

As of 2020, nearly every single store you go into or frequent regularly will accept both Apple Pay and Google Pay. In the last 12 months or so, I’ve yet to find somewhere, save for a few seriously underground cash-only bars, that do not accept Apple Pay or Google Pay.