I have never been a big fan of Apple’s Safari; despite using MacBooks and iMacs pretty much exclusively for the past decade. Like most people, I use Chrome (or more recently BRAVE browser) for all my internet wanderings. But all this could change with the roll-out of Apple’s Big Sur update, as Safari is getting some much-needed new tweaks.

One of the main issues many people have with Safari (on desktop) is that, once you get more than five or six tabs open, things start to get confusing. Individual tabs are difficult to discern, they lack the clear, defined demarcation that is used in Chrome, and this makes using Safari kind of a chore, especially since there are now plenty of better alternatives.

It appears Apple is aware of Safari’s “user experience” problems because its next Mac update, Big Sur, tackles the main issues head-on. Inside Big Sur, Safari will feature a new “live preview” feature, whereby a small, live preview of the site will be shown whenever you hover your mouse over a tab. Individual tabs will also feature clearer markings, including brand logos and brand names in a clearer typeset. 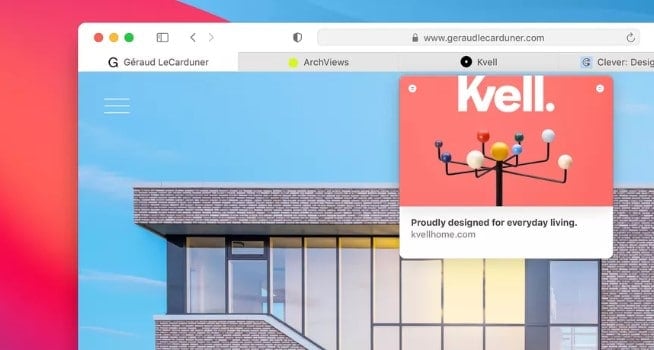 This solves pretty much all my current issues with Safari. By marking the tabs clearer, you remove the confusion. As someone that regularly has over 10 tabs open, this kind of UX design is important to me, so I am glad that Apple has finally started paying some attention to how its browser performs on desktop – it’s been a long time coming!

And it’s not just visual stuff that’s been improved, either. Apple also confirmed that Safari will get broad support for extensions inside Big Sur. Users will be able to download Safari extensions via a dedicated store – just like Google’s Chrome Extensions.

However, unlike Chrome Extensions, Apple will let users customize which sites Safari’s extensions have access to, so if you only require a Safari extension for certain sites – say, your competitor’s store, for instance – you can calibrate the extension’s permissions to ONLY show when you visit that site.

Users will be able to access permissions for ALL extensions via a dedicated section that will be located next to the search bar in Safari.

How will this work? According to reports, developers will be able to download an extension converter for Safari, so they will be able to run their current Chrome extension through it, find out what needs changing, then repackage it in Xcode and apply to have it included in the App Store.

This is a pretty big deal. It’s also something that could – in the longer-term – help Apple steal away some of Chrome’s large install base. Speaking anecdotally, I know a lot of people that are married to Chrome simply because they run a very specific stack of extensions.

If you could, theoretically, get all of these extensions on Safari, there is a case to be made for switching over to Safari. Obviously, this would take a fair amount of time, so it isn’t likely to yield any short term gains, though it is a very positive step in the right direction.

Extensions will also work a lot differently on Safari. The main thing will be protections and security measures; in order for an extension to run, the user will have to grant it certain permissions. These permissions can be calibrated via a large pop up that will appear in Safari the first time the extension is opened.

Another cool feature coming to Safari inside Big Sur? Native translation! Once you have Big Sur installed on your Mac, Safari will automatically translate web pages into your native language, so users will be able to access and read all kinds of new content from non-English speaking countries (and vice versa).

Who knows, maybe you are reading this post, originally published in English, in Portuguese on your Mac running Big Sur?

All told, this is pretty much the biggest update I’ve seen for Safari in as long as I can remember. Will it be enough to pull me away from Chrome and the BRAVE browser?

Probably not, although I will definitely giving the new Big Sur Safari a road-test to see how well it performs compared to older versions of the browser.

For me, the majority of Safari’s current problems are related to its design and how it handles tabs. It also lacks many of the features most Chrome users now take for granted.

Big Sur goes a long way to fixing nearly all of these “problems” so, while I am still a little dubious, I will almost certainly be checking out the new Safari browser as soon as I have Big Sur installed on my iMac.