If you’re looking for a phone with buttons, you do have quite a few options. Here’s our pick of the best QWERTY and T9 mobile phones…

If you’re looking for a simple mobile phone that also has physical buttons and/or a keyboard, you do have quite a few options to consider. The best of which are listed below.

These are the best phones with buttons that we have tested in the last 18 months, covering both smartphones and standard mobile phones. Prices for the mobile phones listed below range from £500/$500 to less than £50/$50.

The cheapest options, of course, are not smartphones and lack things like advanced cameras, high-resolution displays, advanced SoCs, and LTE or 5G connectivity. If you don’t need these things and just want a mobile phone, you’ll be fine with the option from DORO or Nokia.

Combing Nokia’s iconic styling, a T9 keyboard, and 4G connectivity, the Nokia 6300 4G and Nokia 8000 4G, released this year, are designed to meld elements of the past and present together inside a series of phones. 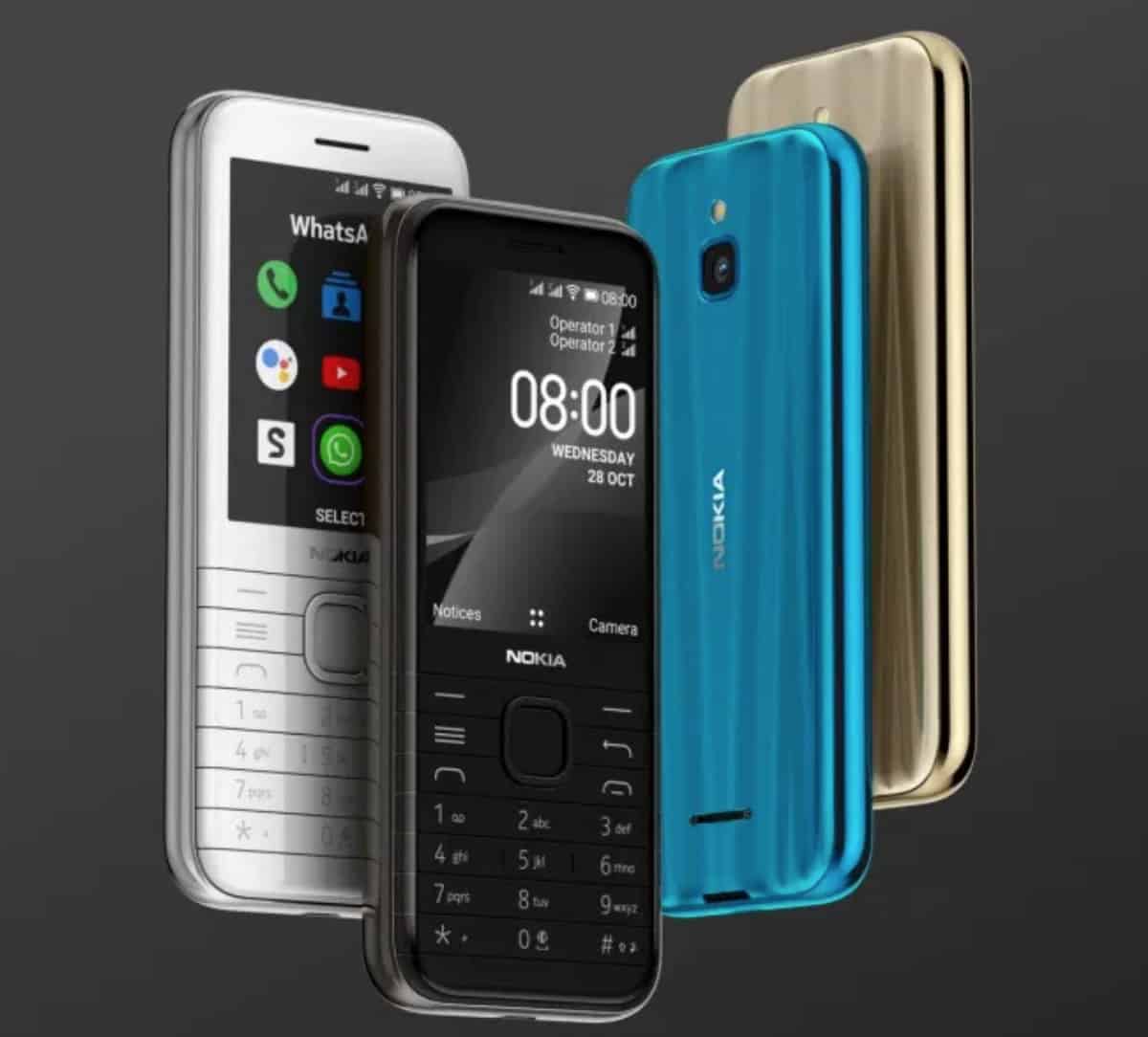 Designed to be simple to use, but also to support applications like WhatsApp, Facebook, and Google Maps, the Nokia 6300 4G and Nokia 8000 4G are feature phones, but they do have a hint of smartphone about them.

“As the world is still adapting to the new normal and working flexibly, we wanted to provide an extra layer of reassurance and convenience for families to remain connected both to their work and one another. The amazingly affordable Nokia 6300 4G and beautiful Nokia 8000 4G offer choice, connectivity, and style, drawing on our trusted heritage, redesigned for the modern-day,” said HMD Global, the parent company of Nokia.

It added: “Plus, both phones can easily double up as pocket-size WiFi hotspots, giving you an extra layer of confidence that you will remain connected on your other devices as well. As a company, we place a huge importance on the essential role feature phones play in the lives of so many. Our goal is to both connect those who need it the most and give our fans the opportunity to choose what phone fits their lifestyle best.”

Both phones have exceptional battery life and are, like Nokia’s original 3310, pretty much indestructible, thanks to their old school design and compact chassis design. Both the Nokia 6300 4G and Nokia 8000 4G have removable batteries too, so you could technically run either of these phones forever, swapping out the battery for a new one once it reaches its end of life.

The Nokia 6300 4G retails for 49 EURO, while the Nokia 8000 4G starts from 79 EURO. Both phones are now available in Finland and Russia. At present, there is no news on whether these phones will get a wider release in the UK and/or the US just yet.

Released in 2018, the BlackBerry KEY2 LE is an Android-powered smartphone that features a full, classic BlackBerry-style keyboard. The phone comes with a powerful Snapdragon 636 processor, 4GB of RAM, and features a high-resolution 4.5in ISP LCD display. 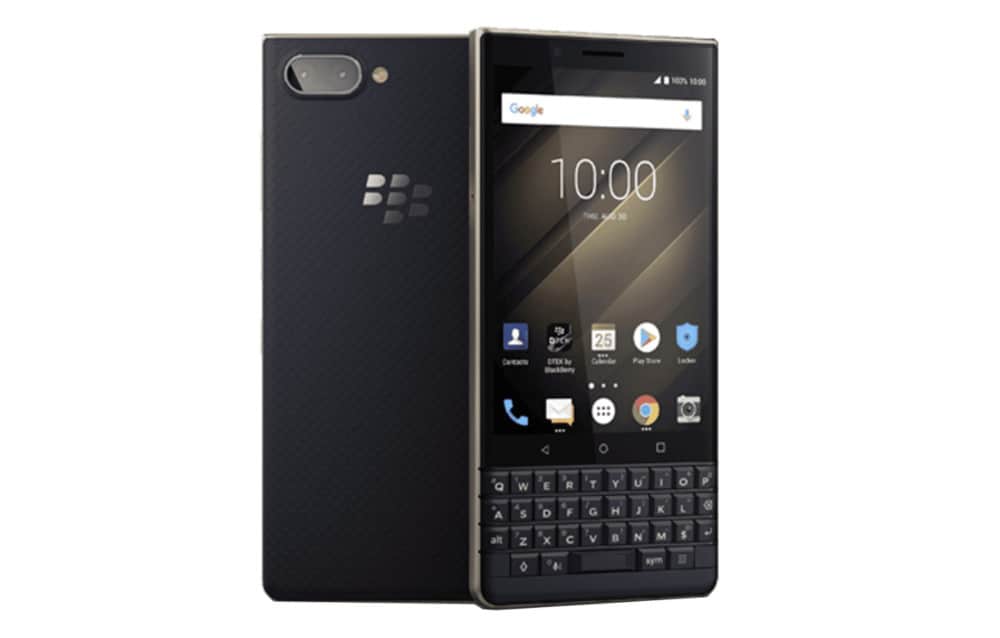 With cameras, you have a 13MP shooter on the rear and a 5MP on the front. With storage, the phone ships with either 32GB or 64GB of internal storage plus support for microSD cards too.

The battery life is great on the BlackBerry KEY2 LE too; it has a 3000mAh battery and, thanks to its smaller display, you should get a solid 1 to 2 days of usage from it before needing a recharge. 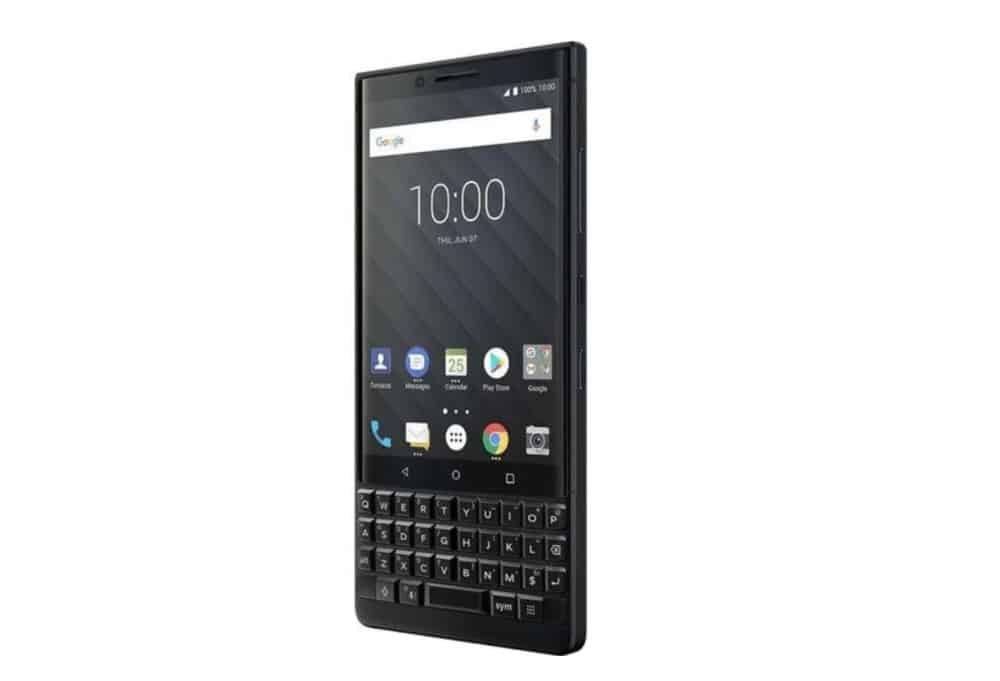 You have a larger 3500mAh battery, more RAM (6GB), more internal storage options – 64GB or 128GB – and a better camera. The BlackBerry KEY2 has a dual 12MP camera on its rear and a 12MP front-facing camera for video calls and selfies.

The “new” Nokia 3310 was also released in 2018. Designed to be the ultimate mobile phone, the Nokia 3310 takes its design inspiration from one of history’s best-selling and beloved mobile phones, the original Nokia 3310 that launched in the late-90s. 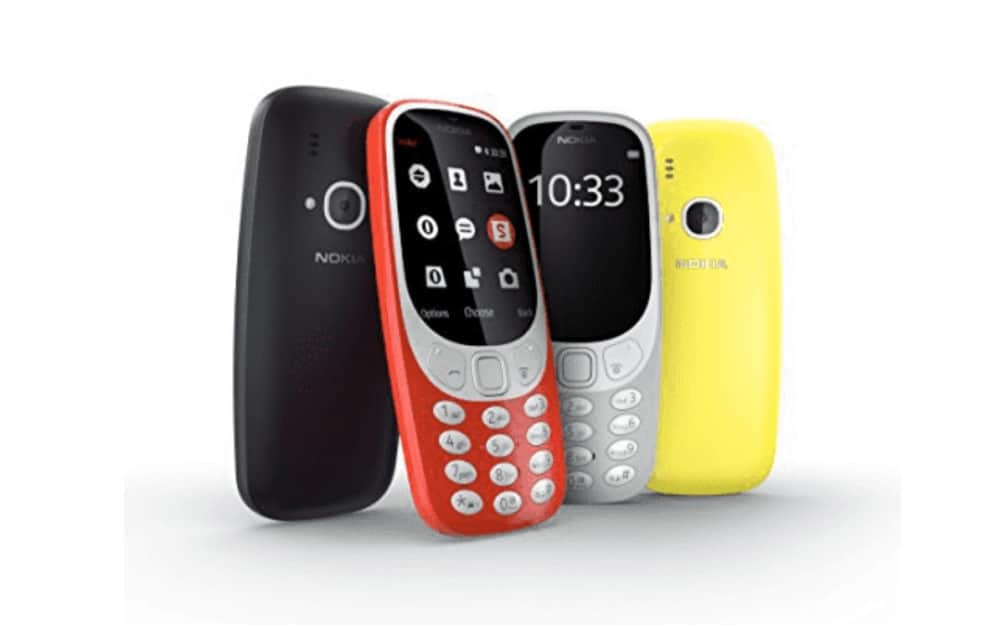 With battery life, you’re looking at almost a full week of usage before a charge is required. That’s because this phone is not a smartphone; rather, it is a basic mobile phone designed purely for texting and calls – and that’s it. If you want a totally simple mobile phone, the Nokia 3310 is hard to beat. Especially for just £99.99 via Amazon.

Like the Nokia 3310, the DORO 7010 is a simple-to-use mobile phone that is designed purely for texts and calls. It has a T9 keyboard and it comes bundled with WhatsApp and Facebook, so you can quickly connect with family and friends. 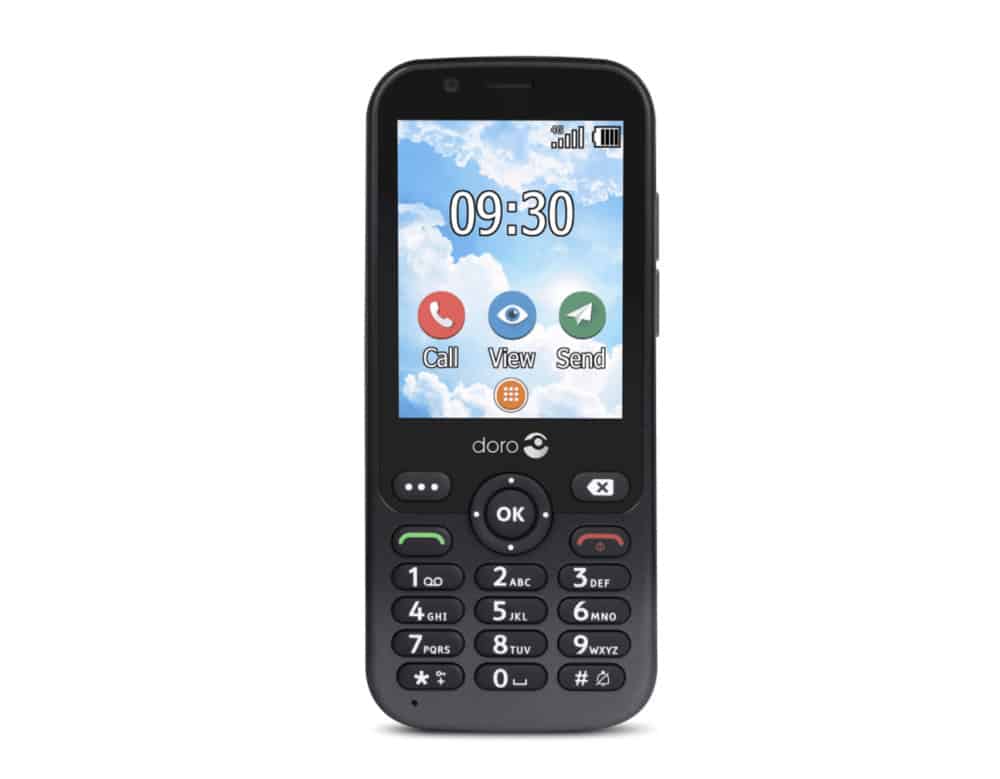 The DORO 7010 does have a WiFi antenna built-in too, so you can connect to the internet in your home. The DORO 7010 has a nice, large display that makes seeing and reading things really easy.

On top of this, the phone’s basic menu system is really simple to use with just a few options – calls, texts, WhatsApp, and Facebook. DORO phones are designed, predominantly, for seniors. All DORO phones come with large fonts for easier reading and big, easy to find buttons. 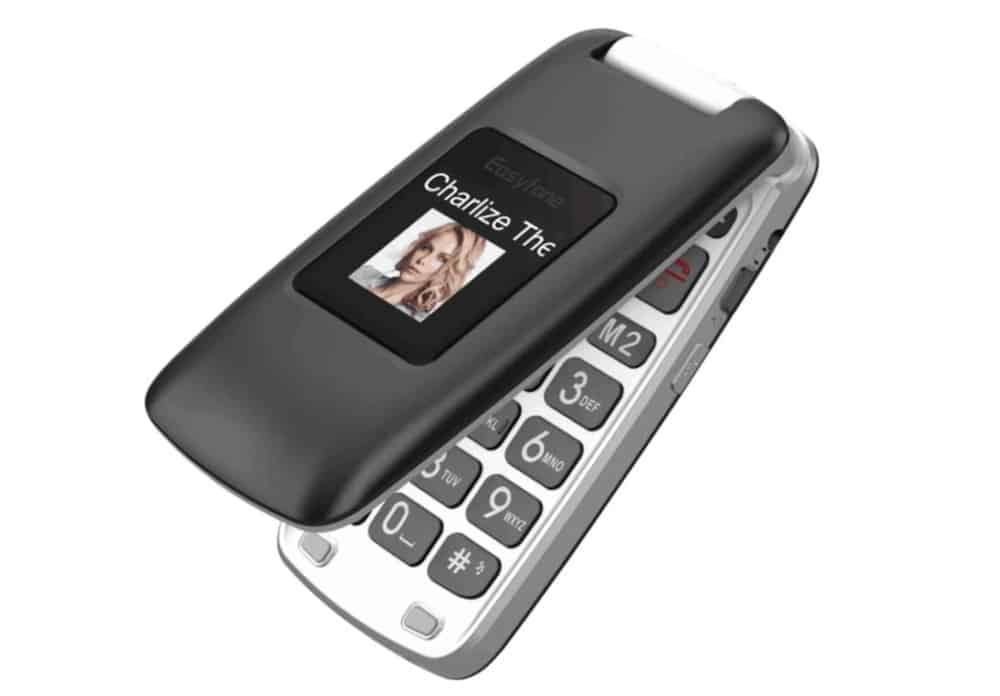 The keyboard is arranged in a T9 configuration, so it is great for dialing phone numbers and sending text messages. You have a 2.4in color display and a 2MP camera on the rear for capturing pictures too.

The Easyfone Prime A1 will also connect to 3G internet too. But its most useful feature his its M4/T4 Hearing Aid Compatibility (HAC). Available in red or white, the Easyfone Prime A1 is compatible with O2, Vodafone, EE, Three UK, and most other UK phone networks. And it costs just £48 via Amazon.

EasyPhone Prime A1 BUY IT NOW 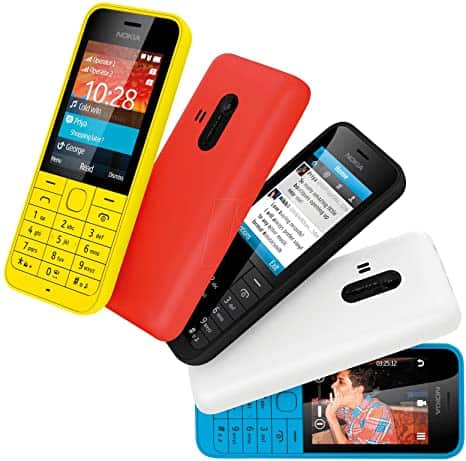 How good is the Nokia 220’s battery? Well, it is rated for nearly 300 hours standby and up to 15 hours of talk-time. That means you will probably only have to charge the phone once or twice a week.

If all you want is the ability to make calls and send texts, the Nokia 220 is one the cheapest and best value phone options with a keyboard on the market. It isn’t a smartphone and it won’t connect to the internet, but if you don’t want/need to do that, this phone is perfect for certain types of users.

All of the phones listed above come with a keyboard, but there are two types of keyboard used on the phones above: QWERTY and T9 keyboards. So what’s the difference between a QWERTY keyboard and a T9 keyboard?

A QWERTY keyboard, like the kind used on the BlackBerry phones, is based on the key arrangement found on a typewriter or computer. The first keys accessible in the top left corner are Q, W, E, R, T, and Y – hence the name QWERTY.

If you can touch type, a QWERTY keyboard will feel instantly recognizable – this is why BlackBerry still uses them. With a QWERTY keyboard, you can type faster and hammer out things like texts and emails in double-quick time.

A T9 keyboard is based on numbers, like a normal telephone, and not letters. But with a T9 keyboard, you can also text too. You just have to get used to double or triple tapping on the number keys. For instance, if you want the letter C, you’ll triple-tap the number 2 key, moving through A, B, and then finally stopping on C.

This is how people originally learned to text, so if you have a mobile phone in the 1990s, you’ll immediately feel right at home using a T9 keyboard.

Things To Keep In Mind:

A mobile phone – or, a feature phone – is different from a smartphone in a couple of ways. A feature phone like the Nokia 3310, for instance, cannot connect to the internet, does not run complex applications, and does not have a fancy camera on its rear.

A smartphone – like Apple’s iPhone – comes with all manner of connectivity options, from 5G to Bluetooth, as well as things like NFC for mobile payments. You also get laptop-grade processors inside modern smartphones that can handle complex applications and games too.

All of these fancy features and abilities, however, hamper battery life. If you run an iPhone, for instance, it can basically do everything but you will have to charge it once a day. With a phone like the Nokia 3310 or Nokia 220, you will maybe be charging your phone once a week – maybe less. And the reason? They’re not smartphones, so the battery isn’t taxed quite as hard as it is inside a smartphone like the iPhone 12.