Jitterbug Flip: The #1 Perfect Cellphone For Seniors In 2020 (Bar None)

The Jitterbug Flip is a basic phone with enlarged buttons that is designed to make mobile communication easier. It doesn’t feature anything complicated, just basic call functionality and a camera…

Having the ability to communicate is something most of us take for granted, however, for many people, the idea of using an iPhone – or an Android phone – is comparable to learning Mandarin. Thankfully, in a world of ever-more-complicated smartphones, there are simpler options for seniors and those that simply cannot stand technology.

You have plenty of feature phones to choose from; some are even pretty good like the revamped Nokia 3310. But if you want to get as back to basics as possible, then there really is only one game in town right now, and it goes by the name Jitterbug Flip.

What is The Jitterbug Flip?

The Jitterbug Flip is an easy-to-use mobile phone. And that’s all it really is – a mobile phone. It doesn’t run applications or games, and it doesn’t have a touchscreen or laptop-grade multi-threaded processor inside it – it’s just a basic mobile phone that is designed to make calls.

The Jitterbug Flip is designed with seniors in mind; it has large, easy to see buttons, a simple design that is both pocketable and durable, and it has a small display on the front of the device that displays the time and date, as well any incoming calls.

The Jitterbug Flip utilizes a flip-open design, so when it’s closed the buttons are hidden. This means you won’t accidentally call anyone when it’s in your pocket. On the back of the phone, you have a 2MP camera that also doubles as a magnifying glass which you can use to read anything from the small print on letters to the newspaper.

Other cool bits include the ability to voice dial any of your contacts, a powerful built-in speaker that is SUPER loud, so you’ll always hear the phone ringing and a super-simple menu for navigating around the phone. The Jitterbug Flip is available in red and graphite color options.

Above everything else, though, the Jitterbug Flip has been designed to be as simple as possible to use. The care and attention that has gone into its design, functionality, and layout are all geared towards removing any layers of complexity – all the functions are just one click away. And this, combined with its large buttons and loudspeaker, make it an ideal choice for seniors.

The Phone With A Dedicated 5Star Button

Simplicity is one thing, but the Jitterbug Flip’s main USP is that it features a dedicated 5Star button. Think of the 5Star button as an Emergency button, if you’re in trouble or think something might be happening to you, just tap the 5Star button and it’ll connect you to a highly trained Emergency response agent that can if necessary get an ambulance sent to your exact location.

This application is the #1 reason for the phone’s existence; it is designed to protect and help those most vulnerable. If you’re ever in trouble, help is just a click away. And if you’re living with a potentially serious illness or your health isn’t great, having this kind of security can sometimes be the difference between life and death.

And Then There’s Urgent Care

As well as the 5Star button, the Jitterbug Flip also has a feature called Urgent Care, whereby the user can call and access trained doctors and nurses with any queries they might have. You DO NOT need insurance to use this feature, and it can even be used to get prescriptions for common medications over the phone, saving you time and stress.

The 5Star button and the Urgent Care are the two core elements of the Jitterbug Flip that separate it from all other feature phones on the market. No other phone has this kind of medical support baked into it; not even Apple’s iPhone. If you’re concerned about your health, or the health and well being of a loved one, the Jitterbug Flip is most definitely worth a look – the phone itself only cost $74.99 (+ monthly plan) too.

How long does the Jitterbug Flip’s battery life last? The phone itself will last for around 10 hours with moderate usage. If you ONLY use occasionally to make and receive calls, you could be looking at several days in-between charges. 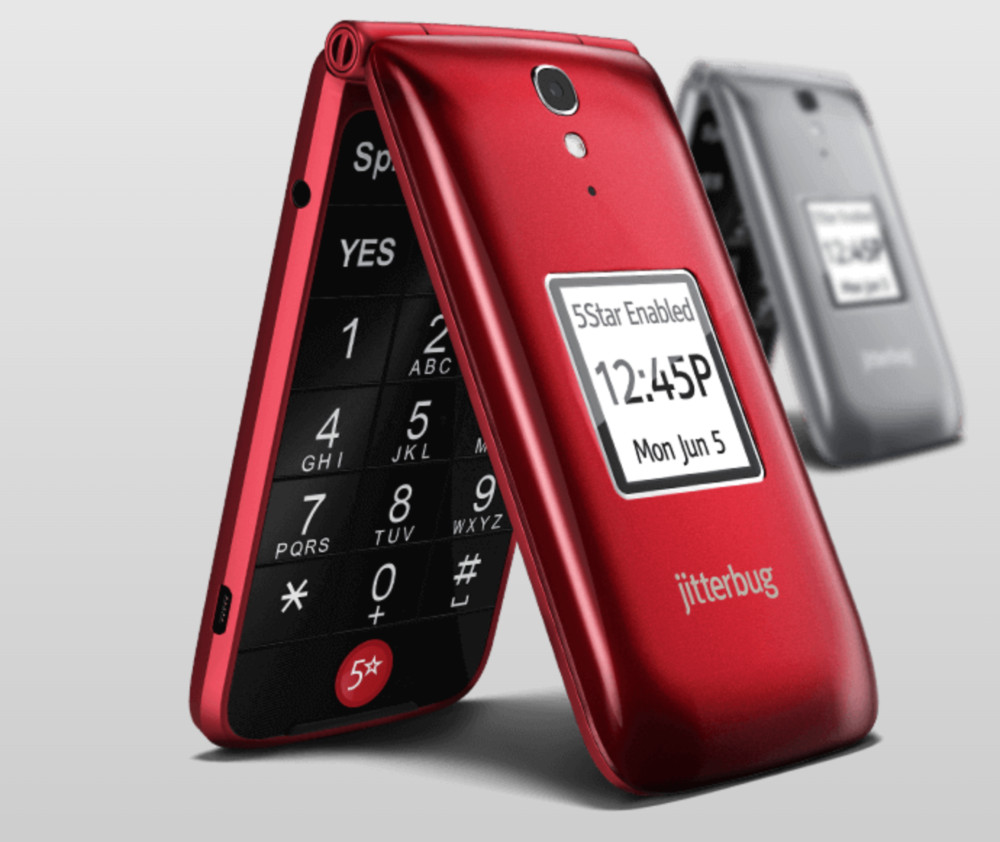 The battery inside the Jitterbug Flip is replaceable too, so you can simply order another one if you experience any issues with the battery life after a couple of years of usage. Batteries tend to degrade over 18-24 months, so this is a key feature. Having the ability to replace your battery is one thing sorely missing from most, modern smartphones.

How much does the Jitterbug Flip cost? You can buy the phone itself for $74.99 (down from $99.99). That gets you the phone. Once you’ve bought the phone, you’ll need to select a plan. There is a range to choose from, as you can see below:

Why separate plans for calls and texts? Simple: because not everybody will want the ability to text. Keeping calls and texts separate means you ONLY pay for what you will actually use.

And check out Will Apple Make A Flip Phone?