I never really “got” the reason for owning an iPad. After all, I have a laptop. But that all changed in 2020 when I ordered a new amp for my guitar…

If you’re going to get a tablet, it might as well be one of Apple’s iPads – it makes a bunch and they’re the best overall option whichever way you slice it. And yet, despite this, I’ve never been much of a tablet user; I’ve tested a bunch of them over the years but never felt compelled to buy one – until now!

Back in April, I pre-ordered Positive Grid’s Spark Amp, a smart amp that connects to your iPhone or iPad via an app and grants you access to over 10,000 potential guitar tones. The amp itself is pretty incredible if you’re a guitar player – it takes up very little room and has tons of capabilities. You can find out more about the Spark Amp in the following post: Why I Pre-Ordered The Spark Amp (And You Should Too).

The main thing about the Spark Amp is that it will replicate basically any guitar sound you want. From James Hetfield to Jimi Hendrix, you’ll find exactly what you’re looking for – all you have to do is search inside the app. On top of this, the Spark Amp will also play along with you, adding drums and bass. This is achieved via some clever artificial intelligence and machine learning.

And if that wasn’t enough, the Spark Amp will also double as a 40W smart speaker, so you can connect your phone and play music through it. It also has plenty of ports too, so you can connect it directly to your PC for recording. I remember seeing the promo video for it; it blew my mind which is why I ordered one as soon as it was available.

Why Did I Buy An iPad Then?

Surely an iPhone or an Android phone would suffice? Both work with the Spark Amp, after all. The main reason is simple: I wanted a larger display to configure all the amp’s settings. You can add and remove pedals and heads, tweak the inputs on them, and mix and match whatever you like. And to do this, I figured it’d be best to have a larger screen.

The Spark Amp features a TON of pedals and amp combinations which you are free to arrange and augment as you like. This is all done on your iPad’s display, you pull stuff out, connect stuff, and then, tweak the sound of the pedals until you find what you want. In order to do this, you’re going to be best off using a bigger display – you’ll have more room, and editing the pedal and amp settings will be a lot less fiddly.

And for this reason, I decided to pick myself up an iPad – I went for the iPad Pro 2018 model. I got it refurbished, as I wanted to save some money and ended up getting one for $469; it was the WiFi-only version. I didn’t need the LTE model, as I’d only be using at home. I went for the 128GB model, again, in order to save some cash. I also got the 12.9in display model too, as I wanted as big a screen as possible.

I Also Needed An iPad Case That Doubled As A Stand…

I didn’t bother with any accessories – things like the Apple Pencil or a keyboard or anything. The only additional thing I needed was a case that doubled as a stand. After some dutiful research, I ended up getting the OtterBox Symmetry Series 360 case (it got it direct for $99.95) – it had great reviews and did exactly what I wanted. As a side bonus, it would also ensure my iPad Pro was protected should I take it with me anywhere outside the home. 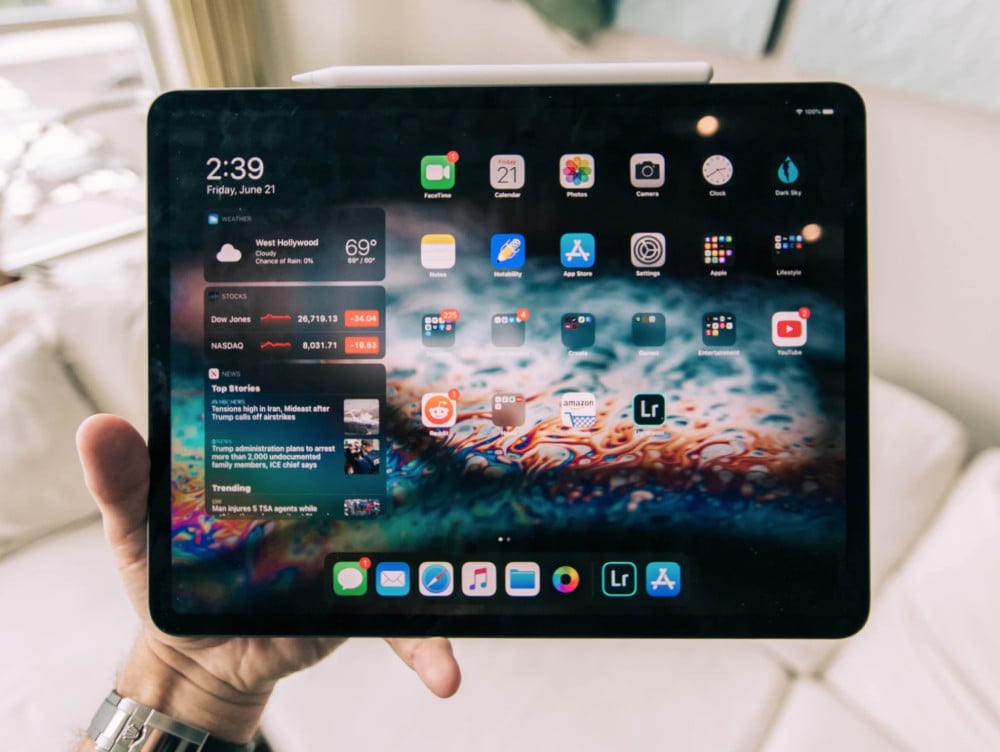 Prior to ordering the Spark Amp, my guitar setup was pretty messy. I had an Orange Crush amp, loads of pedals, and even more wires. It was a mess. I also had no way of jamming without making a lot of noise, and with a new baby in the house, noise is my eternal enemy at the moment. I’d tried a bunch of things in the past, but nothing worked seamlessly. The sound either wasn’t great or it was just too fiddly to maintain which put me off playing.

With the Spark Amp, you plug in headphones (or connect some wireless ones), plug your guitar in, and you’re good to go. You only need one wire, from your guitar to the amp itself, and you’re good to go. All the pedals and amps are handled by the software (on your iPad or iPhone or Android phone). This means you can sit down anywhere in your home and rock out like its 1999 all over again without making hardly any noise.

The iPad As A Guitar FX Amp – Who’d Have Thunk It!

For me, this has been a massive game-changer. The only missing piece of the puzzle was a mobile device with a larger display. Once I got the iPad Pro, everything fell into place perfectly.

The Spark Amp works amazingly well with iOS and having a larger display made making adjustments to all the pedals and amp settings much easier. You can do it on a phone, of course, but it is so much easier when you have 12.9 inches to play with; you can see everything and all your settings are visible, whereas, on an iPhone, even the larger ones, details are trickier to discern from a couple of feet away.

I never thought the reason I’d get an iPad would be related to my guitar playing. Never in a million years. But it just goes to show that, as technology continually develops, we’ll continue to find new and innovative capabilities for things like Apple’s iPad and other mobile devices like the iPhone and Android phones.