Samsung A50 Review – Another Mid-Range Marvel

We’ve already covered the excellent Samsung Galaxy A70, but that’s not the only low-cost handset the South Korean giant is releasing this year. We also have the Galaxy A50, which is a very close match to the A70 but sits a little lower in the company’s portfolio. The burning question is which should you go for – and is the A50 as strong a rival for the all-conquering Google Pixel 3a? We’re about to find out. 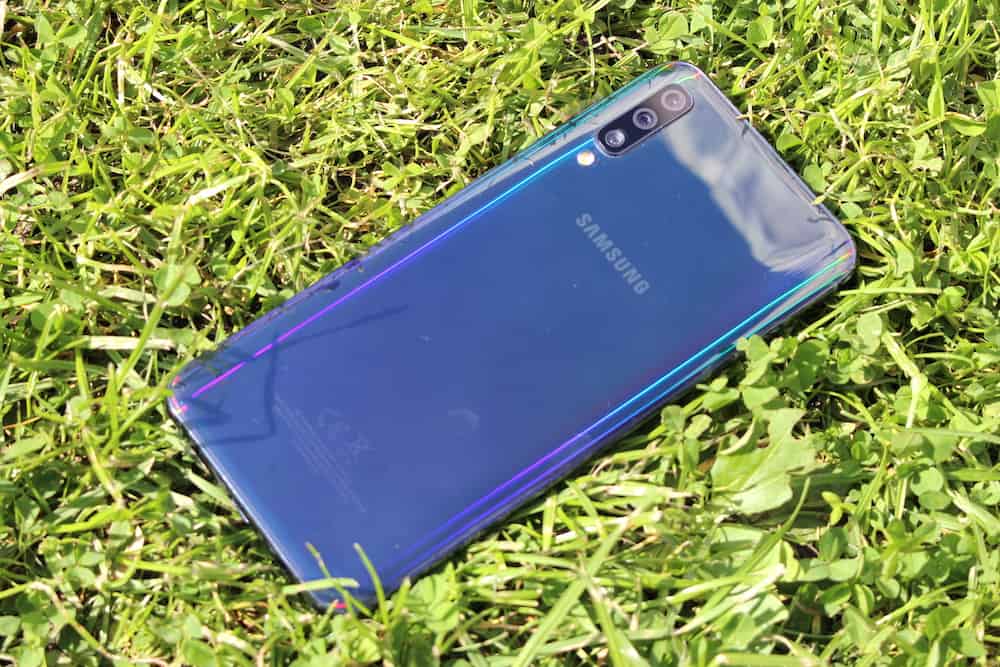 The first thing you’ll notice about the Galaxy A50’s design is the rear panel. It’s made from plastic – as you might expect from a phone in this price range – but it has a really cool multi-colored design that appears to be black indoors but turns into all kinds of shades when sunlight hits it. Samsung isn’t the first company to use this kind of visual gimmick – Huawei is in the mix, too – but it looks remarkable and really gives the A50 a premium feel.

That’s definitely a positive because the rest of the Galaxy A50’s design is very much on the cheap side. The plastic frame feels lightweight, although it’s sturdy enough. The power and volume keys are on the right-hand side, with the SIM card tray on the opposite edge. On the bottom, you’ll find the USB-C port, single speaker and 3.5mm headphone socket. The back is dominated by that aforementioned color-changing rear panel, along with a three-camera setup, LED flash and Samsung logo. 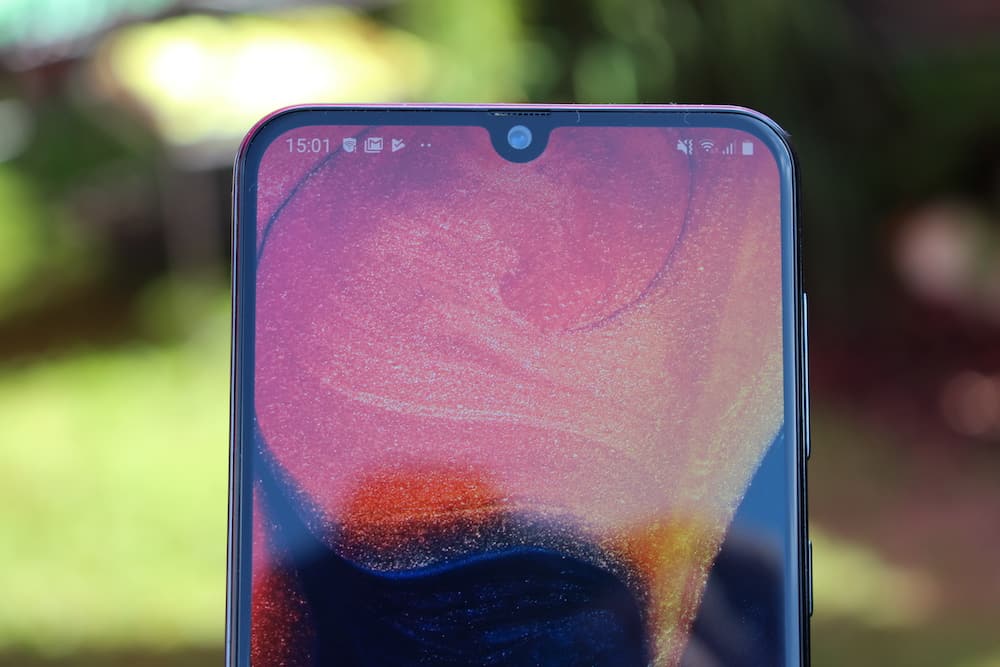 There once was a time when AMOLED panel was the sole preserve of flagship phones, but these days that has all changed. Sure, Apple might still want to short-change its customers by putting an LCD screen inside the still-rather-expensive iPhone XR, but elsewhere in the marketplace AMOLED screens are being seen in devices that are below that magical £400 price point – the Pixel 3a being a perfect example.

Now, Samsung has gone one better by putting one of its superb panels inside the Galaxy A50, a phone which is even cheaper than the Pixel 3a. We’re talking a Super AMOLED screen here, with a Full HD+ (2340 x 1080 pixels) resolution. It’s protected by Gorilla Glass 3 and looks utterly amazing, especially for a phone in this price range.

Like the Galaxy A70, the Galaxy A50’s screen uses Samsung’s Infinity-U design, so the front-facing camera is contained within a small teardrop-style notch at the top. Granted, it’s not as cool as the Infinity-O screen seen on the flagship Galaxy S10, but it nonetheless means you’re getting a lot of screen for your money – even if the bezel at the bottom is a little too large for our liking.

Colors really pop and it’s easy to use in direct sunlight. When you consider the cost of this device, this display really is a marvel. It also has a fast and accurate in-screen fingerprint scanner, which is again impressive for such a modestly-priced device. 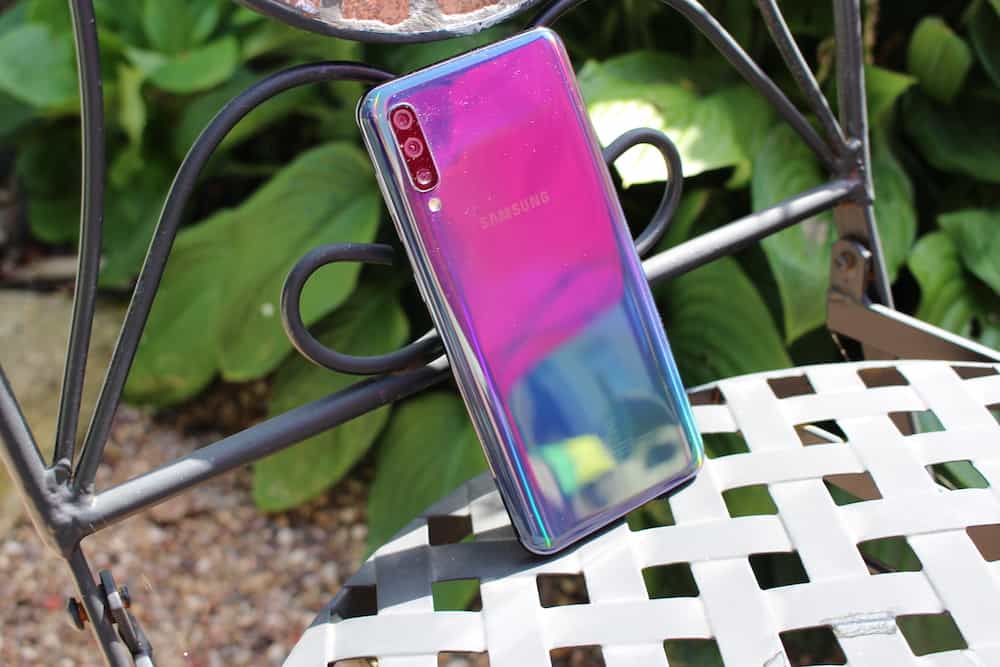 Samsung’s OneUI is powering the Galaxy A50, and it sits on top of Android Pie, the latest iteration of Google’s mobile OS. As we noted in the review for the Galaxy A70, everything is swift and responsive, but it’s a real shame that Samsung insists on getting you to sign into its own account to access core features.

Many of the Google apps you download are replicated by Samsung’s own offerings, most of which are markedly inferior. We’ve seen a lot of other companies realize that this duplication hurts the user experience, but Samsung has stubbornly stuck to its guns and continues to saddle its handsets with needless bloatware. It’s not a deal-breaker of course, and if you’re a seasoned Samsung user then you probably wouldn’t have it any other way, but we’re starting to grow a little tired of this pointless replication of functionality. 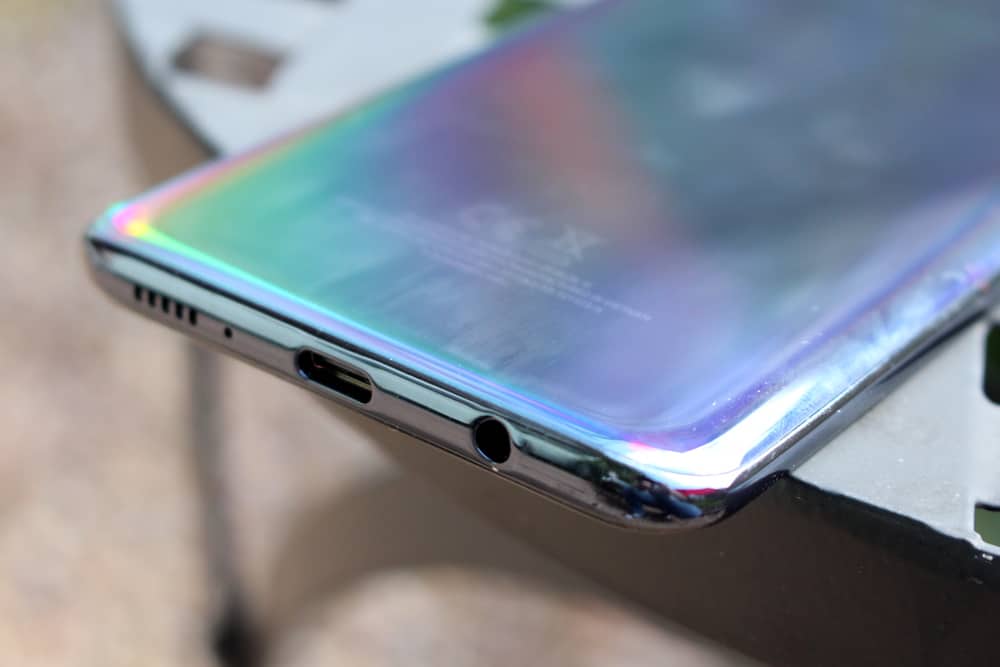 While the Galaxy A50 plays second fiddle to the Galaxy A70 is most respects, it actually has a more powerful processor at its heart. It’s running Samsung’s own octa-core Exynos 9610, which boasts four Cortex-A73 cores clocked at 2.31GHz and four Cortex-A53 cores clocked at 1.74GHz. This is aided by 4GB or 6GB of RAM (depending on the model you buy) and 64GB storage, which you can boost by 512GB using a Micro SD card.

The A70, on the other hand, is using Qualcomm’s Snapdragon 670, which is not only clocked lower but posts weaker benchmark results. As a consequence, there’s little to choose between the two when it comes to pure power. Despite the disparity in terms of processors, the two phones are fast and responsive and will be more than powerful enough for consumers shopping in this price bracket.

The 4,000mAh battery inside the Galaxy A50 will keep you going for an entire day without any issue whatsoever and is supported by 15W fast charging. This means you can quickly recharge the device when it’s low on juice. 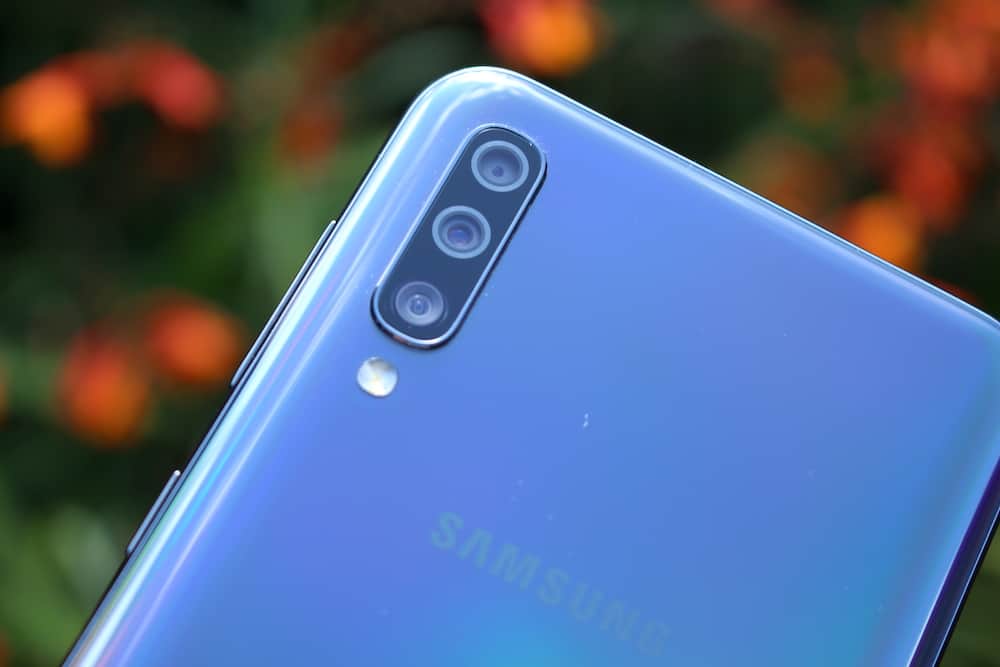 The A50 has a similar three-camera setup to the one seen on the A70. There’s a primary 25-megapixel camera with an f/1.7 aperture, a secondary 5-megapixel camera for depth-sensing camera, an 8-megapixel ultra-wide angle lens which is blessed with a 123-degree field of view.

The main camera takes great shots in the right conditions, showcasing loads of color and plenty of detail. The secondary camera comes in handy when you’re taking bokeh shots, allowing the A50 to produce some arty portrait images.

However, it’s the wide-angle lens that we like the most here, as it allows you to fit more detail into a single shot. We had a lot of fun messing about with this particular feature, and it’s encouraging to see Samsung embrace this approach on two such pocket-friendly handsets. These two shots were taken at the exact same position; the first is the primary camera and the second is the wide-angle lens: 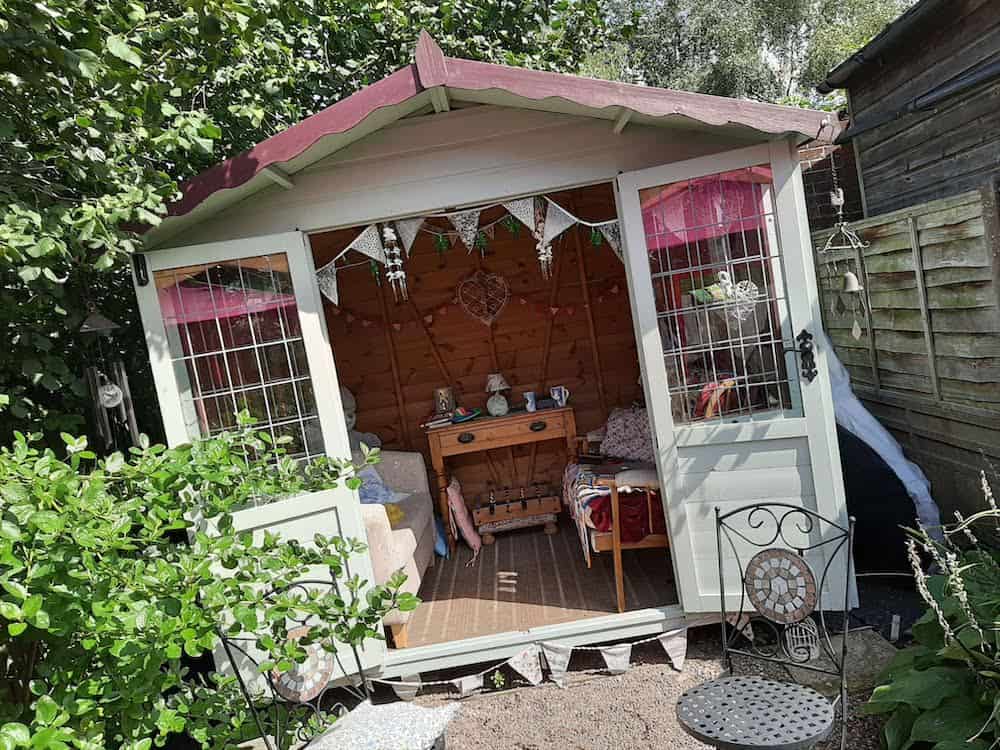 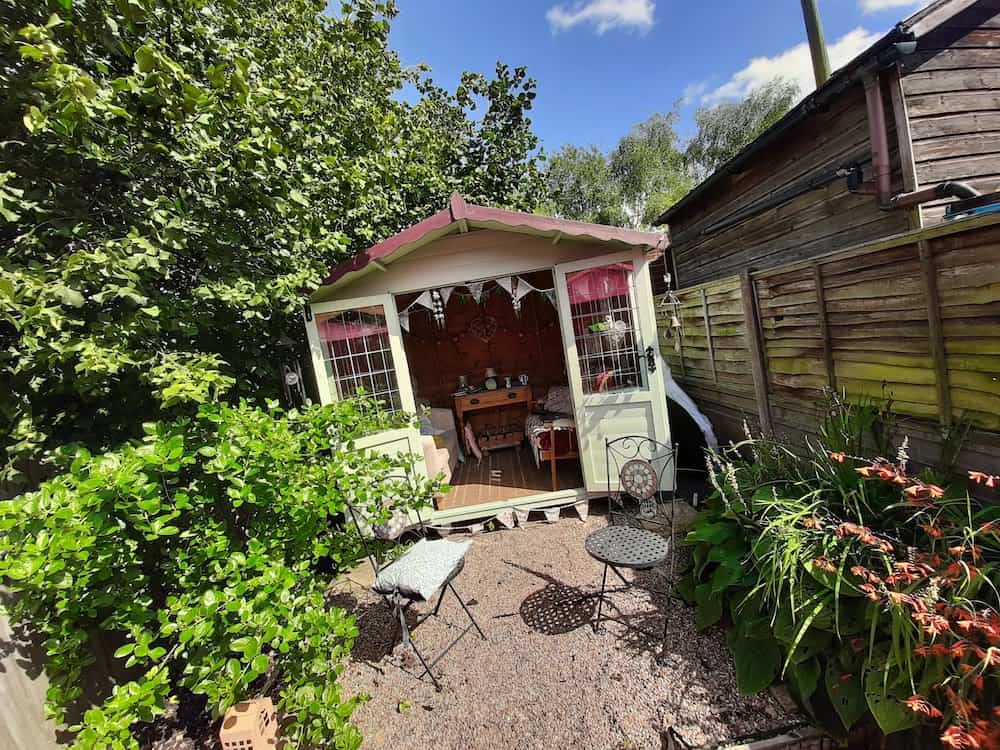 Sadly, the A50 falls down when it comes to low-light photography; it simply cannot compete with the Pixel 3a in this regard. Even so, this is a decent setup, as you can see from these sample images. 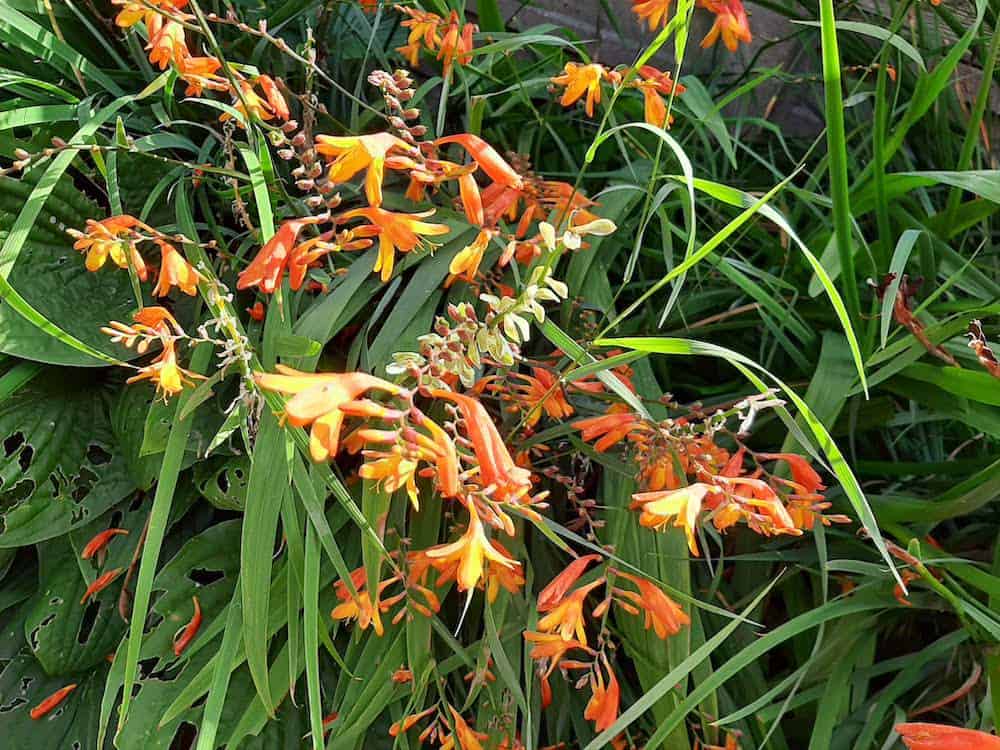 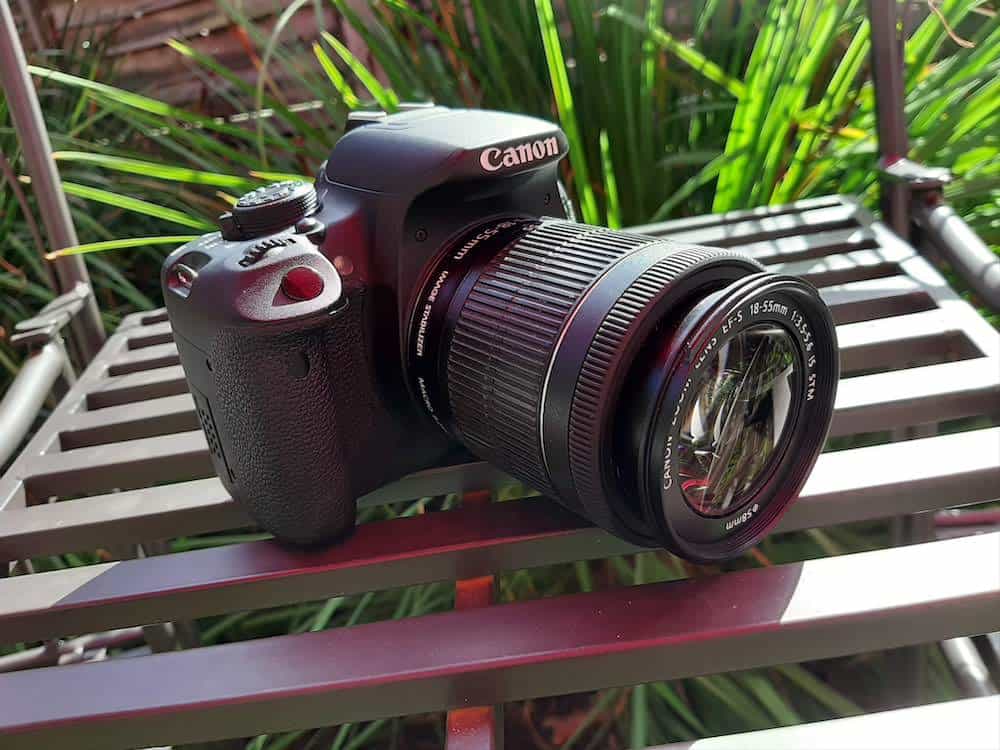 Given that there’s such a small difference in price between the Galaxy A50 and Galaxy A70, it’s hard to choose between them. However, we think the latter is perhaps the best option but if you’re really shopping on a tight budget then the A50 isn’t likely to disappoint.

Thanks to Mobilefun.co.uk for supplying the Samsung Galaxy A50 used in this review. 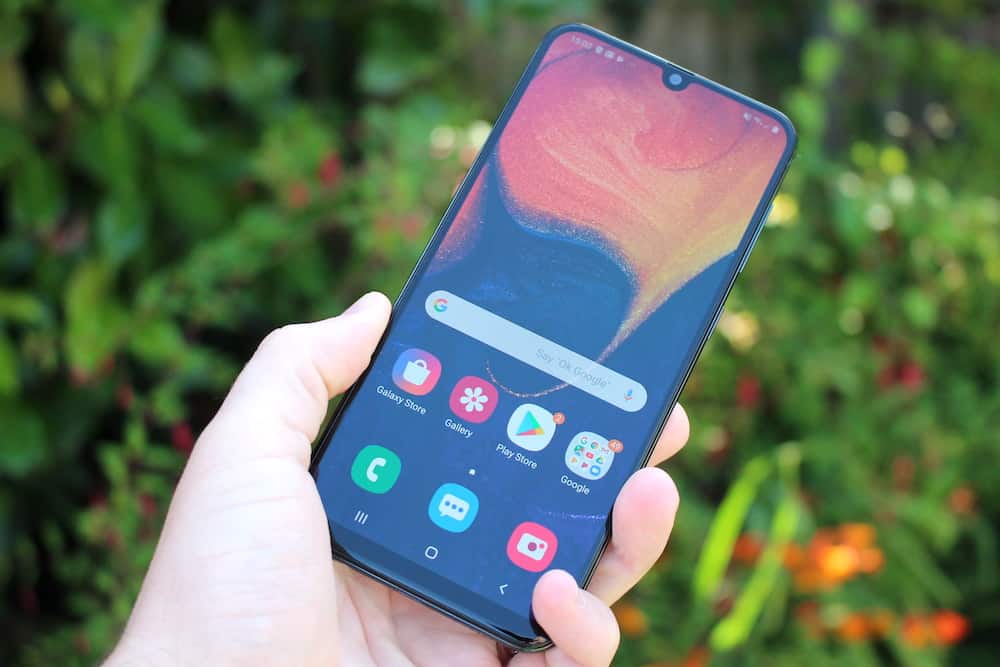