YouTube TV Explained: A Complete Guide on Getting Started

What is YouTube TV? If you’re in the USA, it’s probably one of the best ways of getting off cable for good – but there are some caveats you need to know about…

Are you a cord-cutter? Do you want to rid your home of cable subscriptions, cable boxes, and expensive yearly contracts with content providers that are next to impossible to get out of? If so, read on, because YouTube TV could well be exactly what you’ve been looking for.

With YouTube TV, you effectively get all the benefits of a premium cable subscription package just without all the associated headaches and year-long commitments. All you need is a phone to get started. From here, you can then start watching, streaming, and saving live TV from your cellphone…

Sound good? It is. Read on for our full guide to YouTube TV which covers everything you need to know about the service – from what channels you get to how much it costs and where you can use it…

Not to be confused with YouTube, YouTube TV brings live TV channels direct to your Android phone and tablet. And not just a few channels either; you have support for nearly every American channel and cable network inside YouTube TV – from Fox to NBC to Disney and ESPN. In a nutshell, YouTube TV is hugely impressive over the top internet television application that can (and will) negate the need for expensive cable packages, expensive cable-oriented hardware, and the associated costs of running multiple cable subscriptions.

With YouTube TV, you can bring everything under one roof for one fee, access hundreds of channels, and premium cable network content for just $64 per month. And best off all, there are no contracts and you do not need any expensive additional hardware – just a phone and/or tablet.

You won’t even need any new hardware, save for a Chromecast dongle, and they can be had for less than $50 at most online retailers. If you already have a Smart TV, you won’t even need a Chromecast. Just download the YouTube TV app, sign-in, add your profile, and start streaming live TV to your current HDTV. Simple, right?

YouTube TV runs as an app on your phone and/or tablet. It’ll also run in the browser of your laptop or PC too, so you can effectively take it everywhere with you – so long as you’re inside the USA. And the cost, prices start from $64 a month, make it dramatically cheaper than even the most basic of cable channels subscriptions.

Is YouTube TV the ultimate cable cutter’s dream? Pretty much. There are similar services from Sling TV and Hulu, but many people are drawn to YouTube TV because they’re already running an Android phone and use YouTube. YouTube TV, therefore, is a natural extension of what they’re already doing – it’s YouTube, just for live TV and cable-channel content.

Sling TV is cheaper, however, so if monthly cost is something that is important to you, Sling TV has Android TV beat in this context.

YouTube TV launched on February 28, 2017. Since its launch, it has only been available in the USA. This is largely down to Google’s licensing agreements with content providers. All the channels you get on YouTube TV are American, so the content can only be accessed and viewed in the USA.

However, if you have a good VPN service, we use SurfShark, you will be able to sign up and access YouTube TV from the UK, or anywhere else in the world. All you have to do is download the VPN, you can do that here, sign-in and set your location to somewhere in the USA. Once you’ve done this, you’ll be able to sign up for and use YouTube TV.

One thing to remember, however, when using VPNs is that service providers are always getting better at sniffing them out. Your VPN might work one day, but the next day it might be blocked. This is just a fact of life. It is still worth having a VPN, however, as you can use it for a myriad of useful things online – from unlocking geo-restricted content to buying cheaper plane tickets.

You also get access to NFL games, excluding the Super Bowl, and a range of other live sports – from the NHL to the NBL and all kinds of racing from F1 to IndyCar. As of right now, YouTube TV supports over 60 networks as well as mainstream cable networks and a ton on-demand networks too. So while YouTube TV is more expensive than Netflix, you do get A LOT more for your money.

YouTube TV is all about live TV, live sports, and cable content. It’s not a traditional on-demand service like Netflix. With YouTube TV, you watch content as you would do on a standard cable network, although you can download and save and record stuff using Cloud DVR (more on this in a bit though).

A YouTube TV subscription costs $64 per month. And for that money, you get access to over 60 networks and cable channels, live sports, including the NFL, and a whole host of additional on-demand content as well.

To put that figure into context, a similar-looking cable package with the same amount of channels would probably set you back anywhere from $100 to $150 a month. This makes YouTube TV practically unmissable, especially if you want to watch cable TV for less. 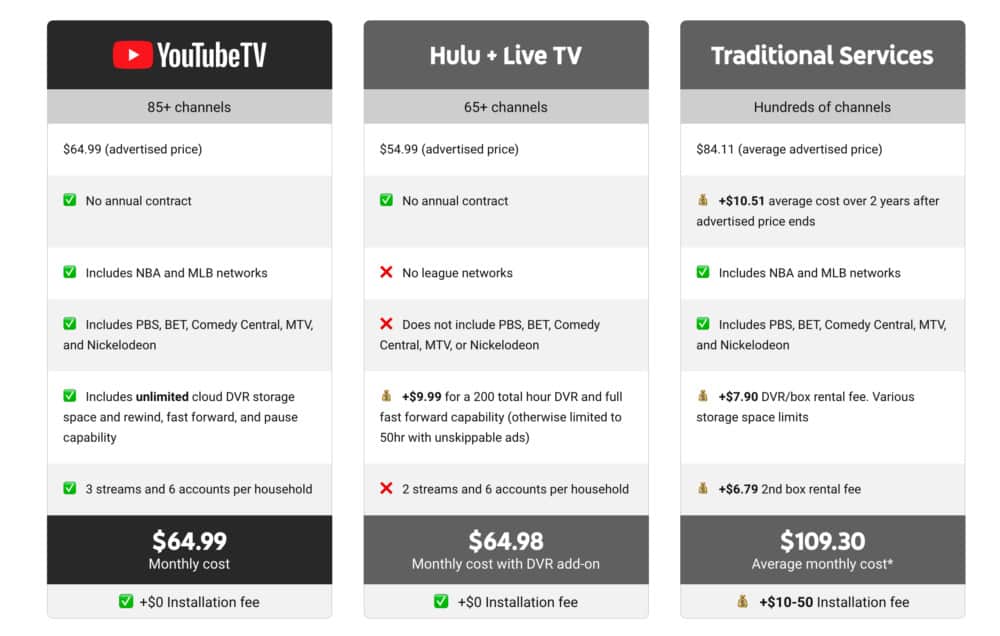 Because YouTube TV is owned and operated by YouTube, a Google company, you will have to put up with adverts. This is how Google ensures YouTube TV is profitable. Adverts suck, granted, but when you’re getting what is effectively a $150 a month cable subscription for $64, there’s always going to be concessions. And in this context, it is adverts.

Sling TV is cheaper than YouTube TV with prices starting at $25 per month, although Sling TV’s Cloud DVR services are no way near as good as what you get with YouTube TV. And trust me, this is important – you will use Cloud DVR a lot, so it pays to go with the service that offers the best Cloud DVR support which, in this context, is YouTube TV.

Perhaps the coolest thing about YouTube TV, aside from how much it costs, is its awesome Cloud DVR system. With YouTube TV’s Cloud DVR, you can record and save live TV shows, films, and sporting events as they happen, so you can come back and watch them later.

You could also record and save all major NFL games every week. Cloud DVR is an awesome tool to have at your disposal because it means you don’t have to watch live TV; you just record what you want to watch and then watch it when it is convenient with you.

YouTube TV is a completely different platform. It is designed for live TV, it costs $64 a month, and for all intents and purposes, it has nothing to do with YouTube or YouTube Premium, save for the fact that it is owned and operated by the same company that runs YouTube. YouTube TV is basically an over-the-top internet cable package (only priced a lot lower than standard cable packages).

YouTube TV is now available as an app for iPhone and Android. It also comes installed on Android TV and is available on both Roku and Apple TV. With consoles, you will be able to run YouTube TV on both Xbox and PS4, as well as Amazon’s Fire TV dongles and streaming units.

When you sign up to YouTube TV, you will be allowed to have it up and running six different devices at any one time, so you can have it on your HDTV, your tablet, your PC, and your laptop. This means you can take it with you whenever you go traveling.

You can also have three concurrent streams running at once, so you could be watching NFL in the living room while your wife and kids watch a movie upstairs. This is a handy feature, one that a lot of other OTT services leave out, so it’s good to see it included here.

The YouTube TV interface and UX is fairly straight forward and simple to use. You have three main sections:

YouTube TV also has a very robust search function. It’s located at the top right and it is a great tool for finding new stuff to watch. I like to use fairly generic search terms and see what the YouTube TV algorithm pulls up. Example: enter “sci-fi” and YouTube TV will pull up loads of options for sci-fi-themed TV shows and movies.

The streaming resolution you get will be dependent on the source of the stream, so if Fox is streaming the content in 720p, you’re limited to 720p. Most of the content – like 98% – is streamed in 1080p. Sadly, there is no support for 4K content just yet, though that will likely change in the coming months, as 4K content becomes more and more popular.

This, for some, will be one of the biggest downsides to YouTube TV, especially since both Netflix and Amazon Prime Video now support native 4K content. Still, though, YouTube TV’s ace in the hole is not its streaming quality; it’s the quality of the content you can stream using the service.

Plus, 1080p is still pretty good, so long as you’ve not been spoilt by watching 4K content on Netflix or Amazon…

If you watch a lot or TV or have an expensive monthly cable bill, and you want to get rid of that cost or dramatically reduce it, then, yes, YouTube TV is 100% worth it – you’ll get full cable access for just $64 a month.

There are no contracts and you do not need any additional hardware. All you need is a phone and an internet connection and a TV, though that isn’t essential – you could just as easily watch YouTube TV on a laptop, phone or tablet if you don’t have a TV.

With YouTube TV, you’ll get access to all the most popular television networks and cable networks in the US. You’ll get access to sports, TV, films, and documentaries. And you’ll be able to record and save all your favorite shows too, thanks to YouTube TV’s market-leading Cloud DVR support, for around 70% less than a standard cable subscription.

If you’re in the USA and want to reduce your monthly cable bills, YouTube TV is perhaps the simplest and easiest way to go about doing this. It’s not as cheap as Sling TV, which starts from $35 a month, but with Sling TV you’re missing out on a couple of key things – most notably unlimited Cloud DVR downloads and the ability to save content offline for nine months at a time.