Is Airport WiFi Safe? Not Exactly (Unless You Do This)…

Free public WiFi, like the kind you get in an airport, is great. But is it safe? Or are you making life easier for hackers? Let’s investigate…

Everybody loves free WiFi, and as many as 70% of tablet owners have admitted to using free WiFi networks – whether in coffee shops or in other places like airports. Free is good. We all know this. But when it comes to WiFi networks, you need to be very careful…

Why? Data sent through free WiFi networks can be easily intercepted by hackers and/or scammers. You’ve seen Mr. Robot, right? Well, that kind of stuff happens every day – there are plenty of hackers out there looking for exploits that’ll grant them access to your phone.

And a free WiFi network – like the kind you find in airports and coffee shops – is one of the easiest places for these hackers to target unsuspecting victims. They play on your naiveté; they know you don’t know the network isn’t safe, so they can intercept your device with ease.

It might be via a pop-up or a text link. Either way, if you’re targeted, and you’re not 100% au fait with how hackers operate, nine-times-outta-ten, they’ll get you. And the worse part is you won’t know it happened until it’s too late. Basically, when using free, public WiFi networks you need to be super-careful – even ones in airports and coffee shops.

Get a VPN. It’s that simple. If you want to browse online on free, public WiFi networks, you need to get a VPN – I use ExpressVPN. Using a VPN, will encrypt your connection and hide your IP address, so no one – not the network operator or cybercriminals – will be able to find your or your device’s data while you use the network.

Another benefit? A VPN will get around network throttling too, so you’ll get better speeds when connected to free, public WiFi network, whereas those without a VPN will have to put up with throttled download rates and this makes for very sloppy performance. With a VPN, you’re covering your ass and you get better speeds. And that is what you call having your cake and eating it. 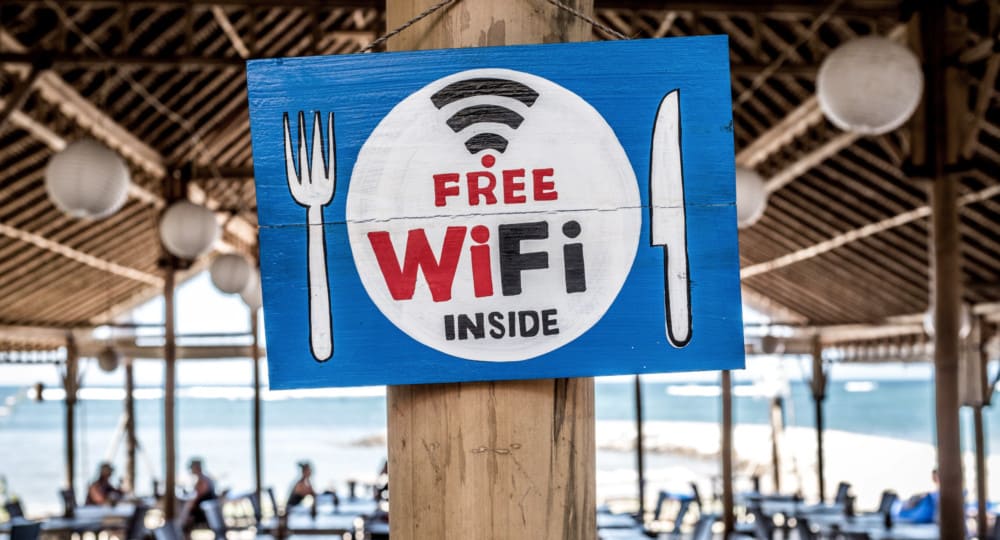 All of Your Devices Can Be Targeted

Don’t just think it’s your phone that can be targeted, any device that is connected to a public WiFi network can be targeted and accessed – this includes your phone, your tablet, and your laptop. Hell, even your Kindle, but that’s less of a worry about there’s no private/important information stored on that.

“One of the most common threats on these networks is called a Man-in-the-Middle (MitM) attack. Essentially, a MitM attack is a form of eavesdropping. When a computer makes a connection to the Internet, data is sent from point A (computer) to point B (service/website), and vulnerabilities can allow an attacker to get in between these transmissions and “read” them. So what you thought was private no longer is” – Norton.

Be Mindful of Pop-Ups & Landing Pages

If you’re going to use a public WiFi network, you need to watch out for phishing scams – basically dodgy links and/or landing pages. They might look like legit sign-up portals and gateways, and they may very well be just that, but there is a possibility that they could be a trap laid by a hacker to gain access to your device.

For this reason, check with the owner of the place you’re at – or customer information, if you’re in an airport – and get all the information you need about accessing the public WiFi safely. Only use the correct network, do not ever do anything like banking on the network, and never open anything online that contains personal information.

Tether To Your Phone Instead

You’ll want to make sure you have a truly unlimited data plan, this is why I use this one from Three; it gives you unlimited 5G/4G data and 100% unlimited tethering, so you can work all day on your phone’s internet connection and not have to worry about a big bill at the end of the month.

I tend to work a lot in coffee shops and airports. I always tether to my phone; it’s always faster and it is a lot more secure. And with the rise of 5G, things are only going to get better in this regard. If you don’t have the kind of data plan that lets you do this sort of thing, you’re next best bet is a VPN – just don’t get a free one, as they’re completely pointless from a security and privacy perspective.

As noted earlier, I use ExpressVPN and have done for the past 18 months. It’s fast, secure, 100% no-logs, and it works on up to five devices at once. For me, it is the #1 best VPN around right now for ease of use, speed, and security. If you want more information on it, check out my ExpressVPN review for coverage of all its features.