OnePlus gobbled up column inches recently thanks to the launch of its groundbreaking OnePlus 7 Pro handset, a top-of-the-line flagship which boasts a massive, full-body screen thanks to the fact that it has a pop-up selfie camera. The phone’s super-smooth 90Hz display was also noteworthy, was the price – at £649 in the UK, it is the most expensive handset that OnePlus has ever produced. However, launched alongside the OnePlus 7 Pro is the more modest OnePlus 7 – this is the first time the Chinese company has released two phones at the same time. Based on the design of the OnePlus 6T, the OnePlus 7 has been unfairly pushed into the shadows thanks to its more expensive big brother, but should you be paying more attention to this device? Let’s find out… 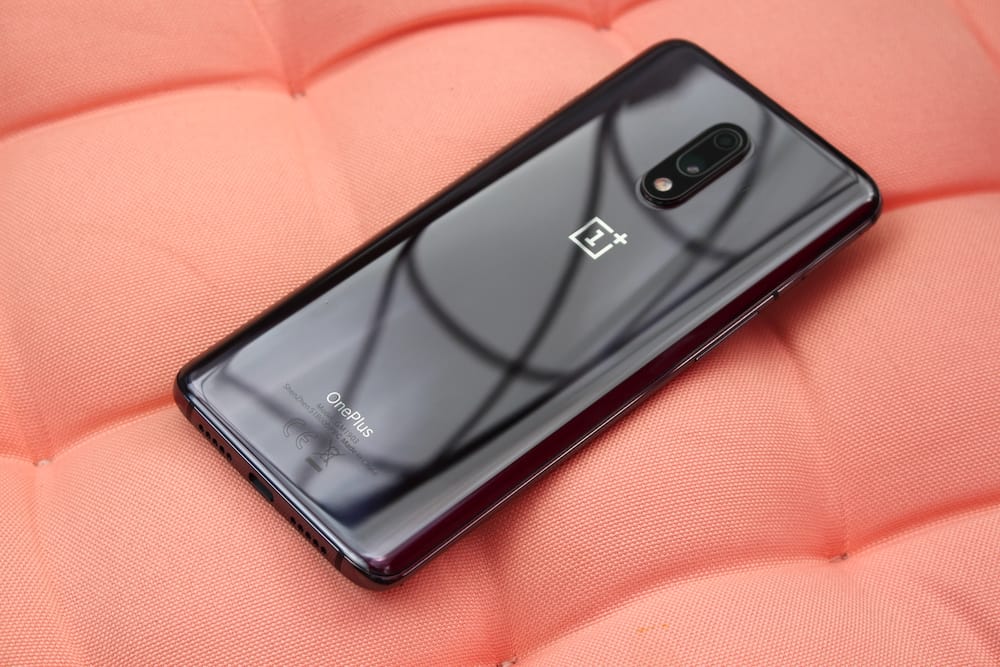 The OnePlus 7 is a dead ringer for the OnePlus 6T from a design perspective. It has the same basic shape and same size display, complete with that likeable teardrop notch at the top. The key difference this time is that it comes in a ‘Mirror Grey’ finish, which is a nice change from the dull black of the 6T but that gorgeous finish picks up fingerprints like there’s no tomorrow – a case might be a wise investment.

The phone’s volume rocker and SIM card tray are located on the left-hand edge, while the power button and silence switch are on the right-hand side. The former is a mechanical toggle – not entirely unlike the one seen on Apple’s phones – which allows you to turn off the phone’s ringer or switch it to vibrate in a single move. The top edge of the OnePlus 7 is featureless save for the noise-cancelling mic, while the bottom has one of the stereo speakers (the other is located above the display) and the USB-C port. On the back, you’ll find the dual-camera setup and OnePlus logo. There’s no headphone jack, in case you were wondering – OnePlus did away with that a while back.

Sure, it looks almost exactly the same as the OnePlus 6T, but that doesn’t take away from the fact that this is one seriously handsome smartphone, and one of the best-looking devices that OnePlus has ever created. 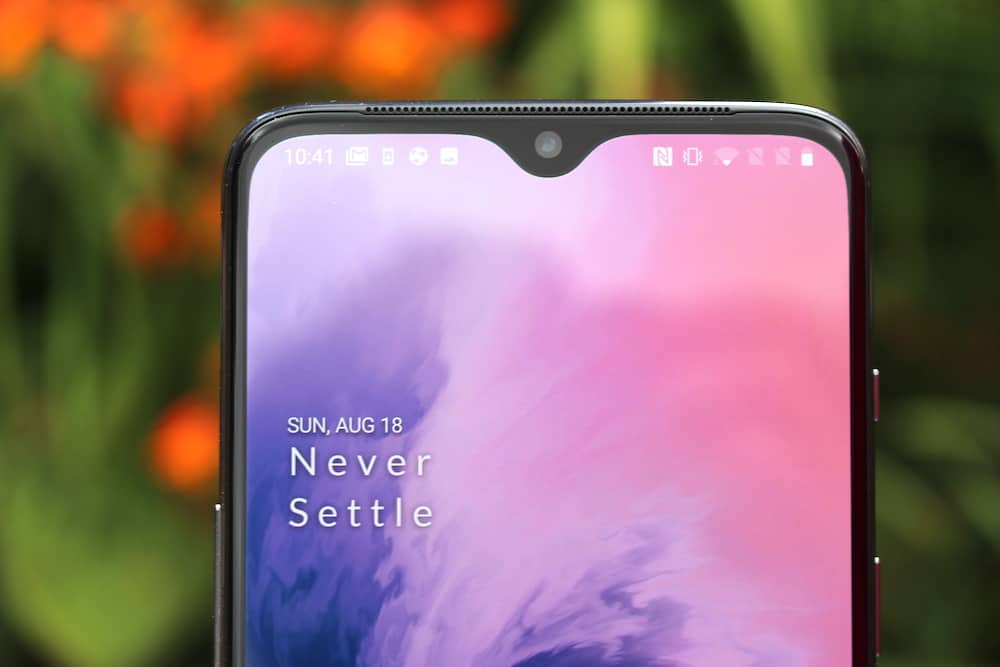 The same 6.41-inch, 1080 x 2340 pixel resolution Optic AMOLED panel that was seen on the OnePlus 6T is present and correct here, and so is the teardrop notch for the front-facing camera.

There’s a small bezel at the bottom of the screen but otherwise, you’re getting a lot of display for your money here – as is evidenced by the fact that despite that massive screen, the OnePlus 7 doesn’t feel large in the hand. The display is protected by Gorilla Glass 6, which means it should be able to keep marks and scratches at bay.

The screen is really impressive, boasting good colour depth and strong contrast; it’s also easy to read in direct sunlight. While it lacks the HDR support and all-important 90Hz fresh rate seen on the OnePlus 7 Pro, this is a wonderful screen for a phone that costs £500.

There’s also an in-screen fingerprint scanner which is slightly larger than the one seen on the OnePlus 6T, which means it should be more precise in the long run. We actually found it was more accurate than the scanner seen on Samsung phones, like the A50 and A70. 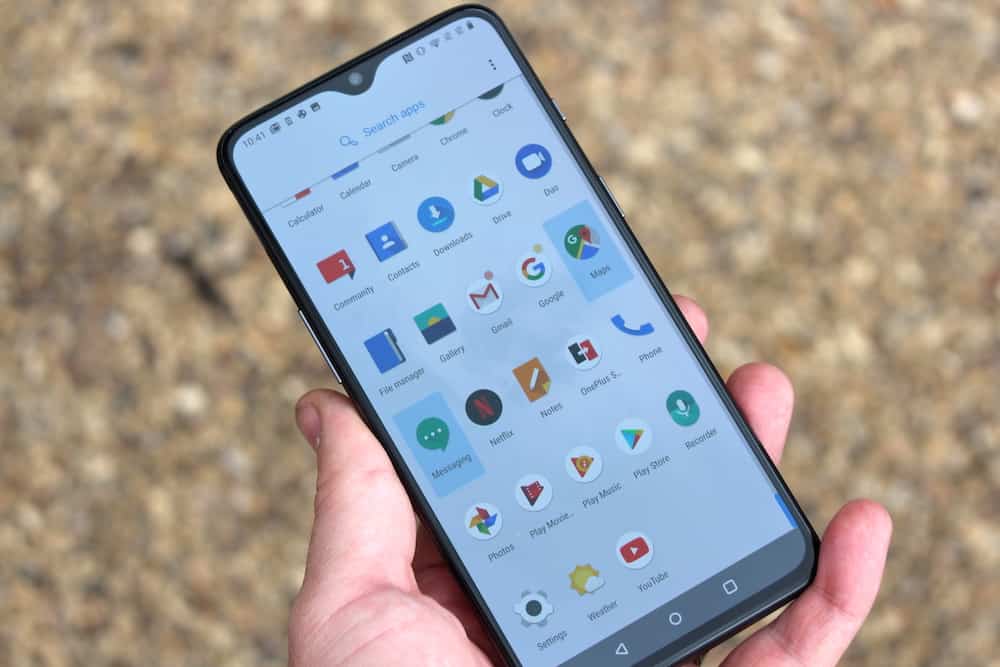 One of the things that OnePlus has always stuck by is keeping its software as close to stock as possible. While its Oxygen UI certainly has a unique feel when compared to ‘pure’ Android, it’s close enough to stock Android Pie that hardcore Google fans will approve. In fact, it’s such a smooth and responsive user experience that we actually found ourselves preferring this to the Pixel 3; that’s not an one-off either, as in previous years we’ve found that OnePlus’ handsets are superior in terms of UX than Google’s. The company clearly does a lot of optimisation on a software level, and it shows.

Another great feature is that the OnePlus 7 comes with very few ‘exclusive’ apps and the company instead chooses to push Google’s suite of application to the front instead. This is in stark contrast to the likes of Samsung, which loads up its devices with apps that needlessly duplicate the functionality of Google’s own offerings.

Given that Oxygen UI remains one of the most appealing and user-friendly Android skins around, there’s very little to grumble about here on a purely software level. 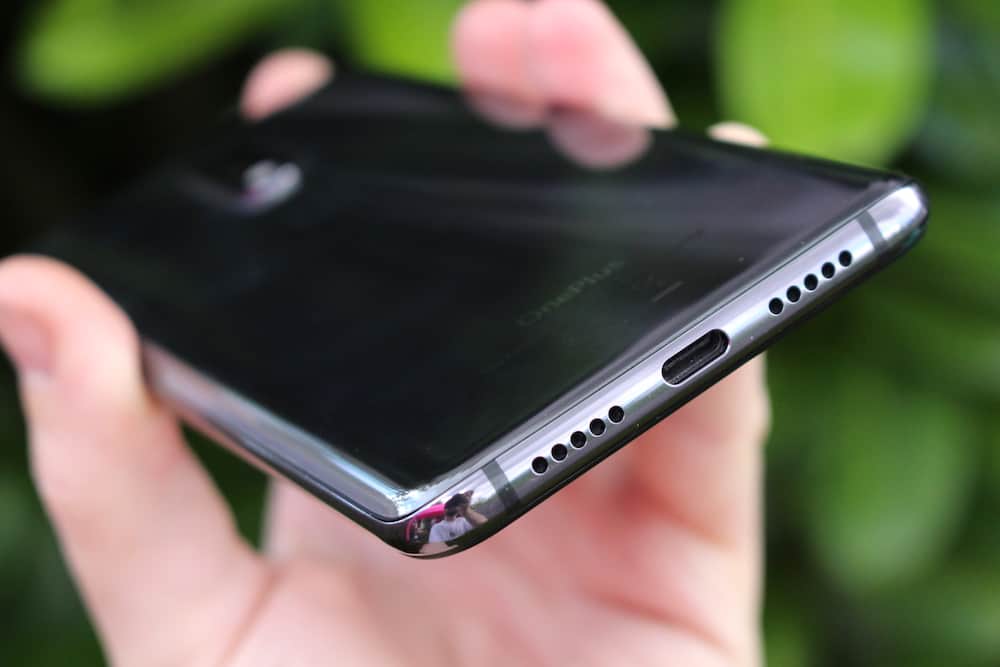 Like a great many Android flagship devices in 2019, the OnePlus 7 is powered by Qualcomm’s Snapdragon 855 chipset. It’s one of the most powerful chips on the market and means the phone is capable of running several demanding apps in tandem, as well as the latest and greatest 3D games like Fortnite and PlayerUnknown’s Battlegrounds.

You can pick up the OnePlus 7 with either 6GB or 8GB of RAM (we reviewed the latter variant); the larger RAM model also comes with a whopping 256GB of storage. However, there’s no way of adding to that figure as the device lacks a Micro SD card slot – so choose wisely at the point of purchase or you could run out of space, depending on your media consumption.

The OnePlus 7’s 3,700mAh battery is the same size as the one seen in the OnePlus 6T, and once again, the phone uses OnePlus’ own Dash Charging tech to top-up the battery faster than normal. Sadly, it’s not as fast to charge as the OnePlus 7 Pro or the OnePlus 6T McLaren Edition. Still, it’s pretty rapid and the battery is big enough to last you at least a day, if not longer. Sadly, there’s no wireless charging – an omission that was annoying on last year’s OnePlus 6T, but is even more frustrating in 2019. While we understand that OnePlus is keen to keep costs down as much as possible, wireless charging is a feature that’s genuinely useful. Hopefully it will factor it into next year’s ‘entry level’ phone. 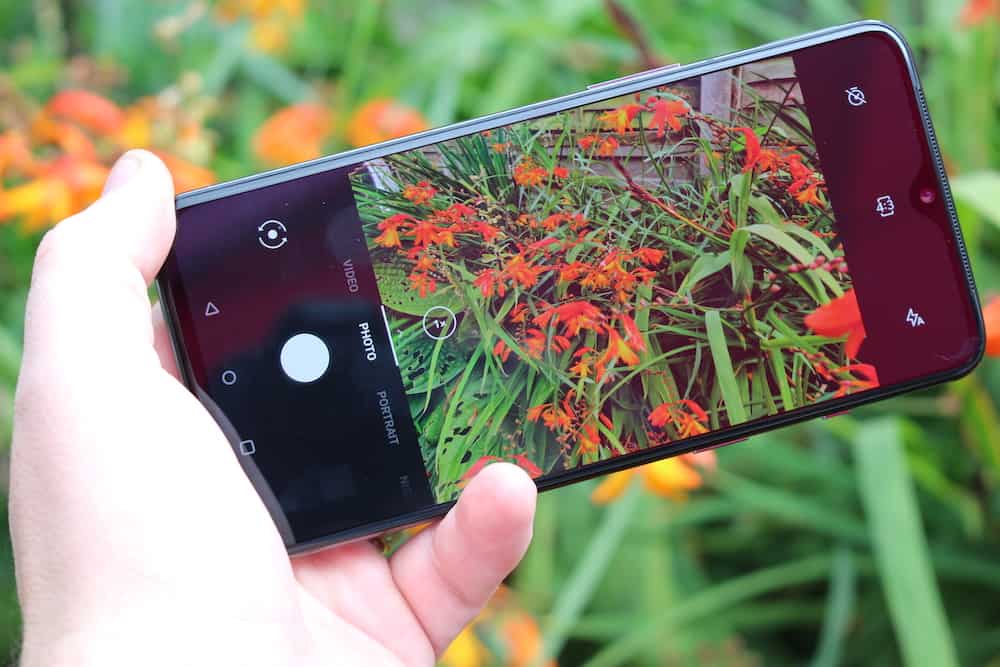 While you might assume that the OnePlus 7 has the same dual-camera setup as the OnePlus 6T, it’s actually had an upgrade. The main camera is a Sony-made 48MP f/1.7 sensor, which is aided by a 5MP f/2.4 depth sensor.

The larger main sensor means that phones have more detail, and when you’re shooting in decent conditions the OnePlus 7 really stuns. Colours look vivid and contrast is perfect – even in situations where you’ve got extreme light and dark areas in the image.

The camera app is fast and responsive, with shutter speed being excellent all-round. You’ve got the usual suite of options here, including a portrait mode which makes use of that secondary depth-sensing camera on the rear. There’s a x2 zoom option but it’s digital rather than optical. 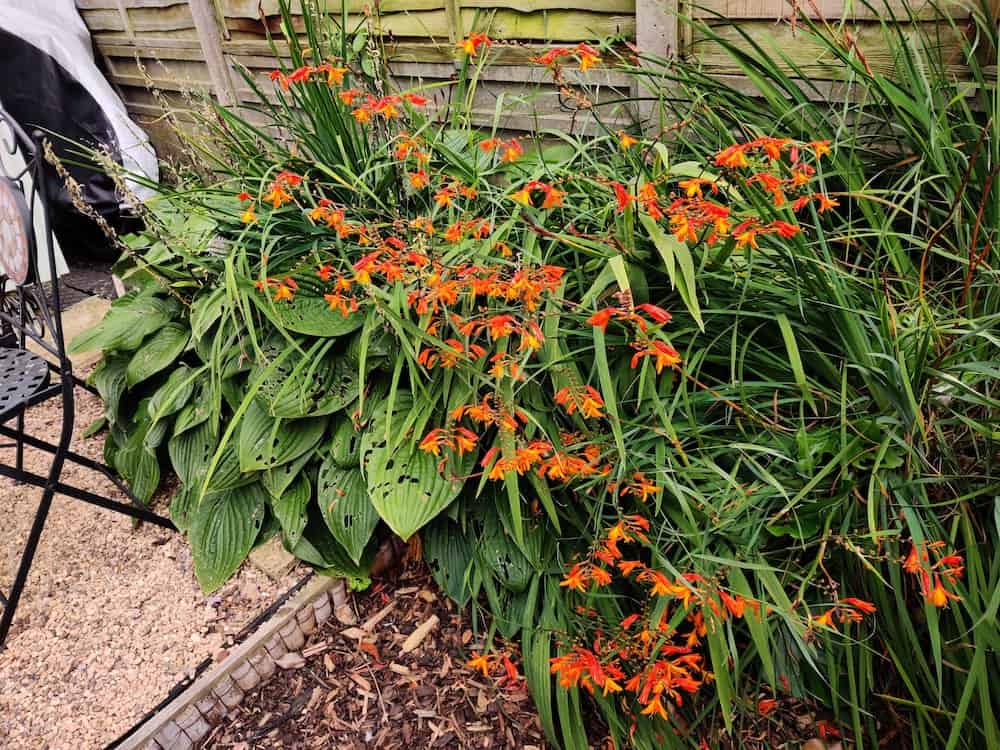 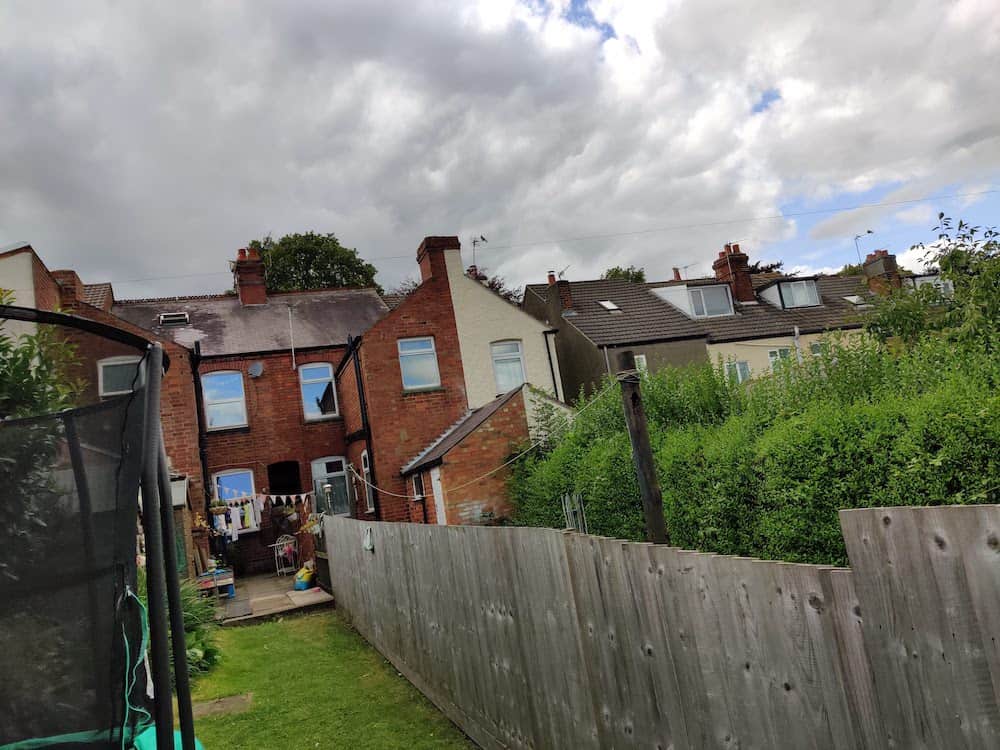 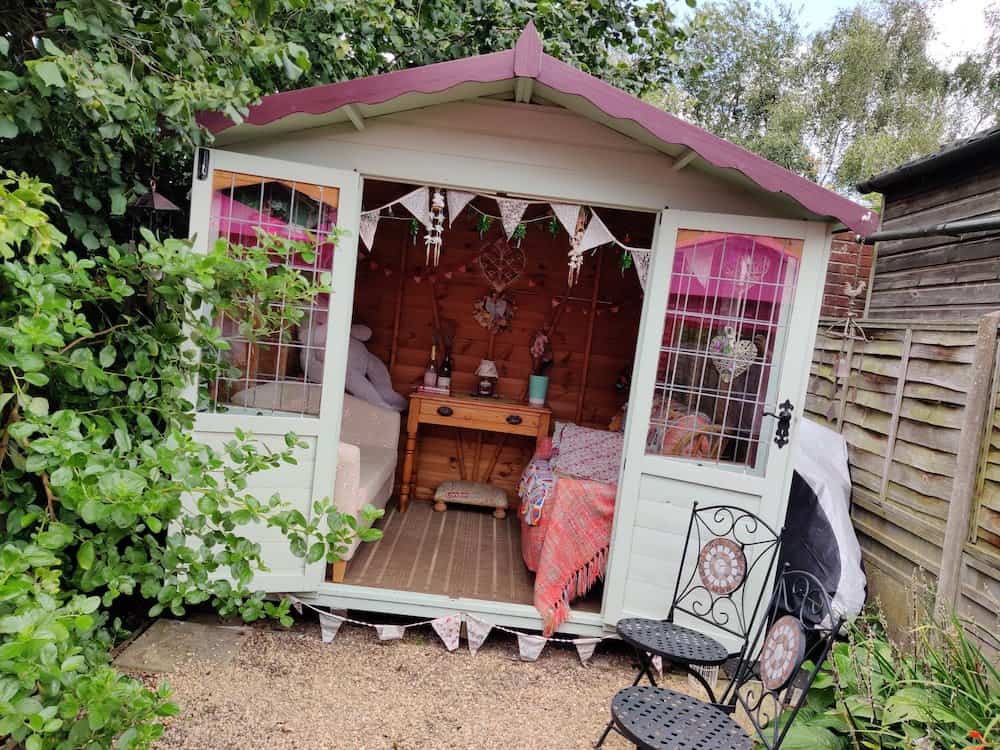 Low-light shooting – via OnePlus’ ‘Nightscape’ mode – isn’t as good as we’ve seen on other Android phones, but it’s still fairly respectable. Video tops out at 4K / 60fps, and is generally excellent.

While the OnePlus 7 hasn’t made massive strides over its forerunner in purely photographic terms, for £500 you’re getting a seriously accomplished snapper here, with good all-round performance, excellent video options and much more besides. 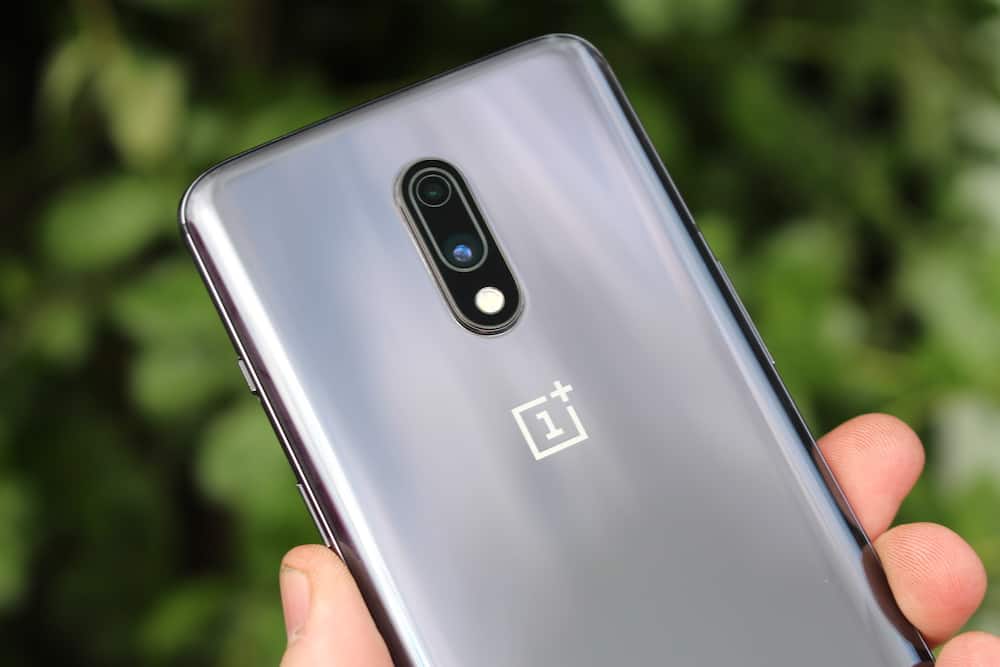 When OnePlus announced the 7 Pro would launch alongside the bog-standard OnePlus 7, it felt only natural to ignore the cheaper variant in favour of its flashy big brother. However, there’s a strong argument for saying that the OnePlus 7 is the real star of the show; it boasts a gorgeous, pocket-friendly design, excellent software and great performance, and it’s cheaper than the OnePlus 7 Pro – which, while more impressive technically, has a rather annoying pop-up selfie camera (we do wonder how long that will last before it malfunctions) and a much larger body. Sure, the OnePlus 7 is more conventional and doesn’t try to dazzle with technical gimmicks, but it’s also one of the most powerful phones you can buy for under £500. In that regard, it’s a solid upgrade – although we’d arguably recommend it more to OnePlus newcomers and OnePlus 6 owners rather than those who already own the very similar OnePlus 6T. 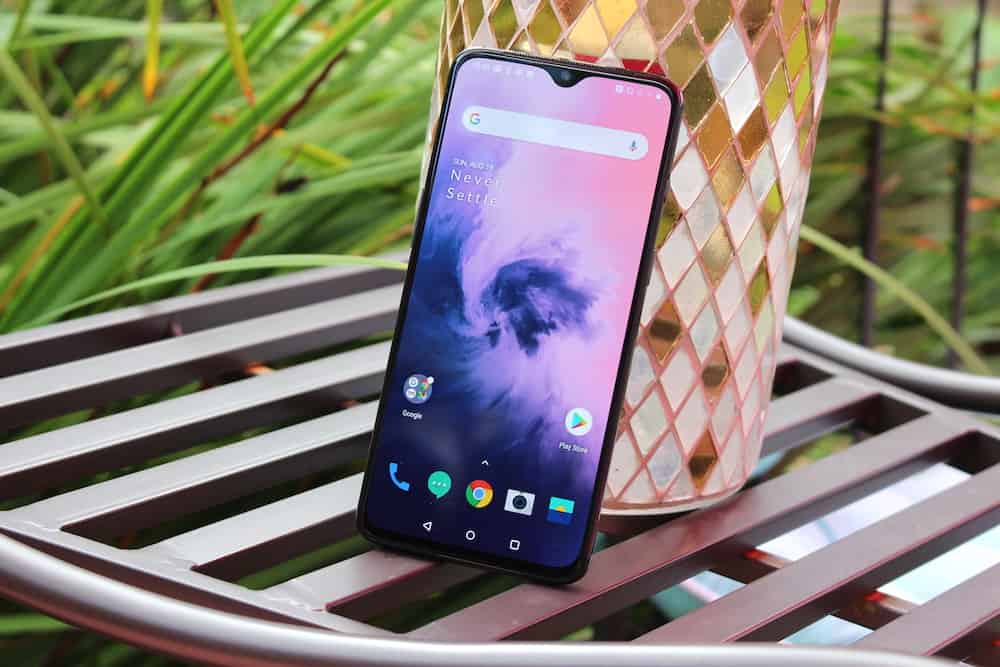