The iPhone 6s and iPhone 6s Plus introduced a ton of under the hood improvements: things like 2GB of RAM (finally!), a 12MP rear camera, a 5MP front camera, and the killer A9 chip. Each of those improvements was enough for me to want to upgrade from my iPhone 6. But now that I got my iPhone 6s it’s clear THE killer feature of it is Apple’s new 3D Touch display.

Apple apparently spent five years developing 3D Touch, meaning when you were using your iPhone 4, Apple was already looking ahead to 2015 features for its iPhones, which goes to show just how far ahead tech companies think when it comes to their products. 3D Touch, like Siri and TouchID before it, is the iPhone 6s’ poster-boy feature.

It is the USP Apple will use to persuade existing iPhone and Android users to switch to its new series of handsets. And it really is quite a USP as well.

MORE: The #1 Best iPhone Model (For Value For Money)

It’s not the iPhone 6s’ only USP. The A9 chipset and 12MP camera are also welcome additions, but 3D Touch is easily the one you’ll probably use most – it’s just so handy once you get used to having it at your disposal. Currently only available inside core iOS apps, 3D Touch will eventually expand into third-party applications once developers get their hands on its SDK, which will bring a ton more utility to the home screen and is no doubt the reason why Apple has left the home screen UX untouched since day — this thing has been brewing for almost five years!

Once you use it, you realize you’ll never interact with your iPhone in the same way again. The 3D Touch display is the only reason needed everyone should be upgrading to the iPhone 6s. And it’s also the thing which should have other smartphone makers trembling in their boots. The 3D Touch display has made every other smartphone look like a relic from a time gone by. Still not convinced? Here’s everything you need to know about it.

What is 3D Touch? The world was first introduced to the touch screen with the introduction of the first iPhone in 2007–and since then the technology (on the consumer front) has remained virtually unchanged. Touch screens could sense multiple touches (one, two, three fingers, etc) which allowed users to swipe, pinch and pan their way around the screen.

The 3D Touch display found in the iPhone 6s is the next evolution of the multi-touch display. Not only can it sense multiple points of input, but it can also sense how much pressure the user applies to the screen. Press lightly and get one action, press harder and get another. It is this act of pressing harder that produces pressure and on a microscopic level allows the finger to press into the display–hence interacting with it in three dimensions.

The 3D Touch display adds three broad areas of interfacing technology actions to your iPhone. The first is called Peek and Pop. Peek and Pop work within apps–both Apple ones and third-party apps (if developers support 3D Touch). As the name “Peek” suggests, the action allows you to quickly peek inside something. This something could be a link in an email or an email itself.

For example, if you open the Mail app you no longer need to tap on a message to read it. You can Peek on it by applying pressure to the message and a preview window will pop up with the content of the email. Peeking also works for web links (Peek on a link and see the page load in a window), addresses (Peek to view a map of the address), Messages, and more.

Quick Actions are another series of actions the 3D Touch display allows for. Unlike Peek and Pop, which work inside apps, Quick Actions also work outside of apps right on the Home screen. I liken Quick Actions to contextual menus found on desktop operating systems. Here’s how they work:

If an app supports quick actions (Mail, Phone, Messages, Music, and a number of other Apple and third-party apps like Dropbox and Twitter currently do) force press on the app’s icon on the home screen. The rest of the home screen will quickly frost over so only the app’s icon and a series of contextual menus appear. These contextual menus are Quick Actions. Tap on one to perform the action. 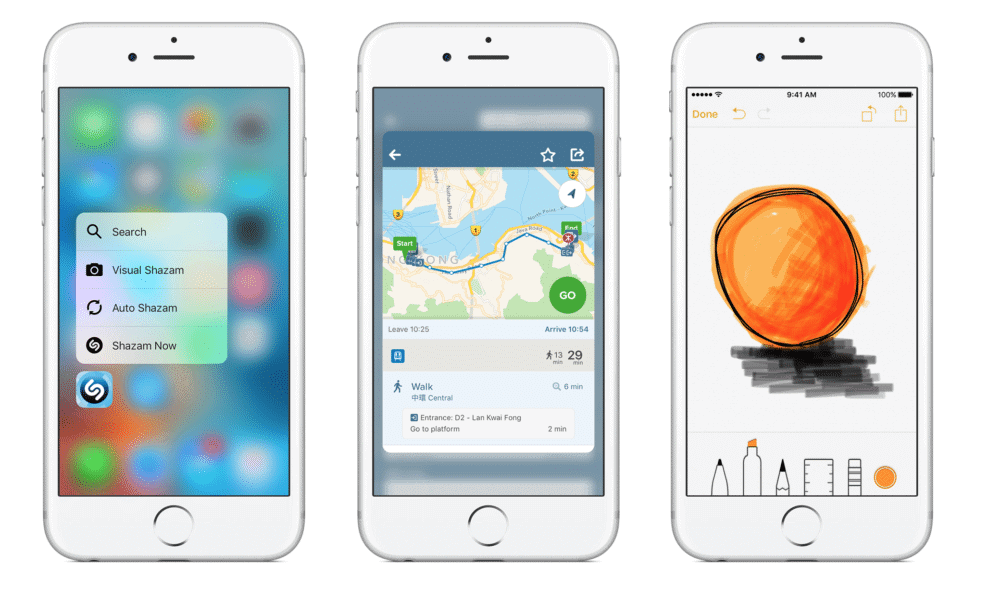 For example, by force pressing on the Camera icon, you get Quick Actions for taking a photo, recording a slow-mo video, recording a regular video, or taking a selfie. Whichever one you press will cause the app to launch right to that exact function inside the app.

Force press on the Phone app icon to see a list of your favorite contacts to call, then tap on their name to call them–no opening of the app required. Force press on the Twitter icon to Quick Action into creating a tweet or sending a new DM.

Quick Actions are designed to save you several taps, which speed up your ability to navigate around your iPhone. Once you use them you’ll think manually having to open an app by tapping on it and then tapping your way into the part of the app that has the action you want to perform just takes too many steps and is too damn slow.

How 3D Touch Makes Your iPhone’s Keyboard Even Better

As much as I love Peel and Pop and Quick Actions, the best feature of the 3D Touch display for me is its ability to turn your keyboard into a trackpad. Now wherever you use the keyboard you can simply force touch on it and you’ll see the keys meld away into a flat trackpad. Drag your finger around this trackpad and you’ll find that it controls the cursor above it. Yes, there’s finally an easy way to position your cursor on your screen! No more needing to tap on the body of the text itself and hoping your finger releases the cursor in the right place. This feature alone is worth upgrading to the iPhone 6s for.

The 3D Touch display also has a few more actions including the ability to sense pressure, for example, in drawing apps. Press harder to create thicker lines and lighter to create thinner ones.  Also, force press alongside the left-hand side of the home screen to bring up the multitasking view.

Now that the 3D Touch display is a reality, you’ll find that using it changes the way you interact with your iPhone. What’s even more exciting is that Apple is just getting started. They are sure to add more Force Touch actions in the future–and third-party developers are already coming up with some amazing ways to take advance of the display.