What Is Live Text On iPhone And How Do You Use It?

Live Text is one of the coolest new features of iOS 15.

Wondering what is Live Text? No wonder! It’s a phrase that’s been thrown around quite a bit since the release of iOS 15. It’s also one of the coolest new features of iOS 15. But the name itself – Live Text – is a bit of band landing, to be honest.

“Live” makes you think it’s something to do with animated text – like a feature you would find in Final Cut Pro or Adobe InDesign. But Live Text couldn’t be more different. Here’s what you need to know about the Live Text feature in iOS 15 and how to use it.

Live Text is an amazing new feature added to iOS 15 and iPadOS 15, as well as macOS 12 that allows you to select, copy, and interact with text in photographs just like you would text in a word document.

In iOS 15 and iPadOS 15, Live Text is primarily found in the default Photos app. Thanks to Live Text, you can now double-tap on text in a photo and select it by highlighting it, copy it to the clipboard, or even interact with it.

Interact with it how, you ask? If the text in a photo has a phone number or address you can tap on the number to call it or tap on the address to map it. It’s incredibly cool and really seems like magic the first time you use it.

Why Do Some Photos Have Text?

When you think of a photo, you think of it capturing physical images: sunsets, people, pets. But plenty of photos we take might have text in them. For example, if you take a photo of a storefront, the store might have its name out front or its address, hours, and phone number, listed on a sign in the window.

Thanks to Live Text, you can select any of this text in the photo of the store.

But Live Text is worth more than just picking up addresses and phone numbers in photos. Thanks to Live Text, now if you take photographs of receipts for things you purchase, you can now quickly select the text right off the photo of that receipt and paste it into any other document.

Live Text even works on photos that are all-text. For example, if you take a photo of a page from a novel because you love the prose, now you can literally copy and paste the prose from the picture itself.

Though Live Text seems magical, Apple hasn’t actually created ground-breaking technology. When it comes down to it Live Text is nothing more than the decades-old optical character recognition (OCR) tech that many specialized apps have.

But the massive benefit of Live Text is that it’s now built into the operating system level of iOS, iPadOS, and macOS, which makes it much more convenient and great eases selecting text in photos.

By the way, Live Text on macOS 12 and later is even built into apps like Preview, too.

How To Use Live Text On iPhone

Using Live Text on iPhone is easy. Keep in mind you’ll need iOS 15 or later installed on an iPhone XS, iPhone XR, or later. Here’s how to use it:

You can also choose to look up directions or go to a web page if the text you selected is a physical address or website address. 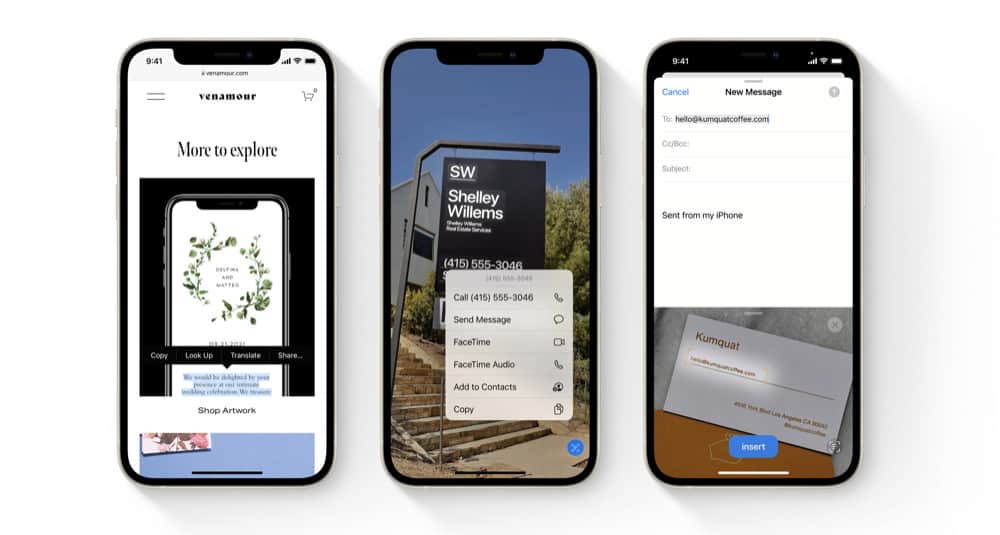