Five Bizarre Ways To Charge Your Phone Without A Charger

By Richard Goodwin
Updated: 09/12/19 - 6 min read
User Guides
How Humans Can Charge Their Phones In The Event of A Global Apocalypse. No Power? No Problem! Now You Just Gotta Worry About Zombie Hoards... Click to Tweet

The apocalypse has been on the cards since, well, the dawn of recorded history. Angry gods irked by the behavior of humans dishing out punishments on a global scale was the go-to scenario for many millennia. Nowadays it’s zombie hoards, flu outbreaks, nuclear war, aliens and/or rogue meteors.

MORE: Find Out What The #1 Best iPhones Are Right Now…

Whatever fate eventually befalls humanity, fear not, dear reader – you’ll still be able to use your smartphone. And its all thanks to these ingenuous contraptions, which will charge your smartphone even when the brown stuff has well and truly hit the fan. 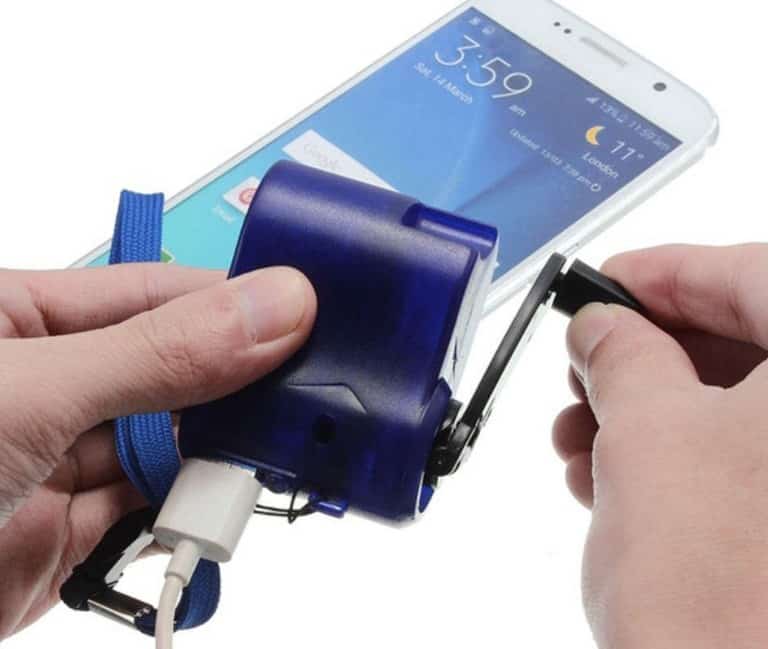 Like feeling that you really earned that iPhone or Galaxy Nexus charge? Fancy exhibiting the kind of vice-like handshake and over-developed forearm muscles (on one side of your body) that can only come from a person who charges their iPhone through sheer brawn? Sounds like Eton’s BoostTurbine 2000 might be the charger for you then, my friend.

For those unfamiliar with them, Eton (the company, not the posh school) is a purveyor of hand-cranked emergency devices  — mainly flashlights, radios, and the sort — geared toward outdoor enthusiasts and survivalists.

Desperate would-be smartphone users will get around 30 seconds of talk time per minute of cranking the BoostTurbine 2000, with the potential to crank all the way to a full charge. At 2000 mAh, you won’t be able to effectively charge laptops or tablets, but phones, MP3 players and other 5V personal electronics should all work effectively. At around £60, it’s a good buy for if you find yourself in a tough spot… 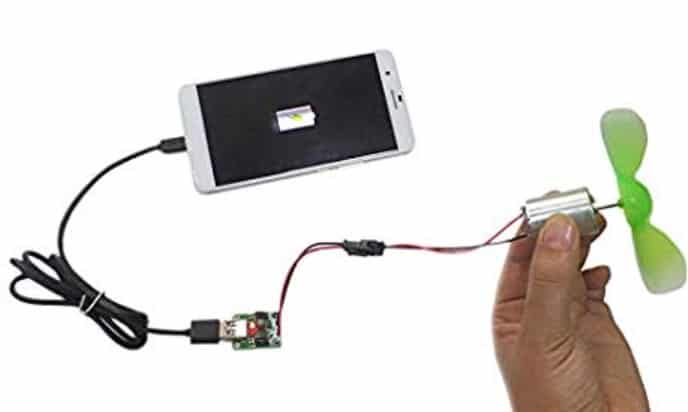 Think the term iFan applies only to the person who camps outside the Apple Store the night before a new model iPhone is released? Think again.

Designed by “3D interior and exterior designer” Tjeerd Veenhoven and made using a modified computer fan, the iFan’s wind turbine approach to charging allows users to harness the “green” power of the wind to energize their smartphones.

The charging process takes around six hours in total — but enthusiastic (and fit) callers can speed it up by attaching the iFan to a bicycle and then cycling your way to a full battery. 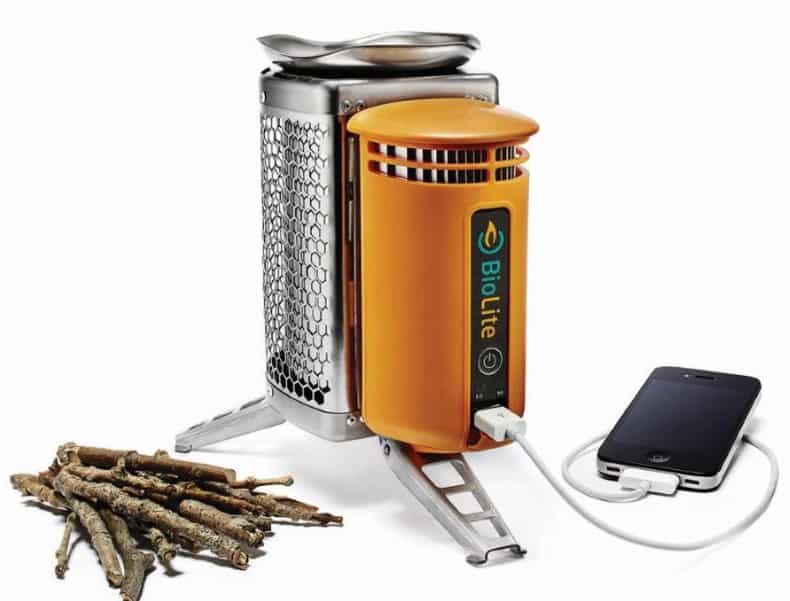 Riddle me this: what charges your phone while heating your soup? BioLite’s CampStove, for one thing. A portable stove for the outdoor gadgeteer, this nifty contraption uses the heat from a campfire to generate electricity by way of a thermoelectric generator, which then powers a fan to create airflow for improved combustion.

Surplus electricity is sent to the USB port for use in charging electronic devices. If that sounds a bit convoluted, it’s not as Rube Goldberg as it might initially sound. Basically, plug in your phone, sit around burning wood and toasting marshmallows for a while and, after around two hours, your empty smartphone will be back to life.

The BioLite CampStove might not be the most useful phone charger on the market, but it certainly works and you have to give its creators points for out-of-the-box thinking.

At the same time, if you’re really keen on using fire to charge your phone, you might just want to consider going all-out by using…

You know that massive ball of burning gas at the center of our solar system, right? Well, it turns out that it throws off an astonishing 400 trillion watts on a fairly regular basis — roughly the amount of energy it would take to power 500,000 years of our current civilization in a single second. And, yes, that includes charging phones. Of course, harnessing the sun’s rays is the tricky bit — which is why we can be thankful for the Solio BOLT Solar Charger + Battery Pack from the aptly-named Better Energy Systems. 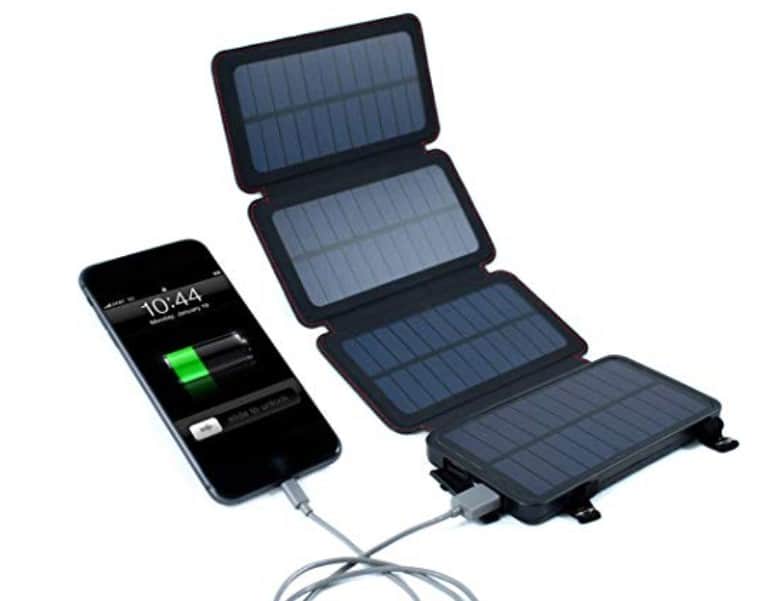 With its onboard battery and rotating solar panels, the Solio BOLT charges can charge USB-powered gadgets ranging from smartphones and MP3 players to e-reader and cameras. As with the hand-crank method described above, the maximum voltage is 5V, but there are few more ingenious ways to recharge your batteries. On average, a smartphone will take around three hours to go from zero to full.

Hey, who could dislike a gadget whose slogan tells us to just “Plug Into the Sun”?

What could be more appropriate than charging an iPhone with an actual apple (or more subversive than doing the same with a Samsung Galaxy)? Well, provided that you’ve got the right tools, a bit of time and, presumably, some fruit you’re less than keen to eat, it can be done.

Essentially what you’re building here is a circuit — like the ones you used to put together in science classes — using a regulation vegetable battery, created by sticking strips of zinc and copper into your fruit or root vegetable of choice. The electricity comes from the oxidation of zinc, with the organic matter serving as a conductive barrier, and the copper (in the form of a penny) completing the circuit. One fruit/vegetable will generate around half a volt of electricity, with stacks of alternating layers of vegetables, zinc, and copper creating a lasagna-like battery series, each set adding to the total voltage.

It might be a cool experiment, but it’s by far the least efficient phone charging method on this list (which is presumably why it hasn’t been commercialized). As science enthusiast Theodore Gray observes of the experiment in his book, Mad Science 2: Experiments You Can Do At Home, But Still Probably Shouldn’t, “To charge an iPhone I had to rearrange the battery into six stacks of about 20 apple/penny slices each, with the six stacks connected in parallel to increase the current capacity. Even so, it charged the phone for literally about one second, just long enough for it to come on and display the charging symbol.”

All that, plus it can damage your phone! But it’s pretty awesome all the same.