iPhone Storage Full? Free Up Space With These 7 Tips (#3 Is Essential!)

Looking to free up some room on your iPhone? Here are six tips for doing it properly, so you have more room for apps and media on your iPhone

In today’s world of advanced applications, high-end cameras producing detailed photos and quality video, and console-grade games, it’s all too easy for your iPhone to fill up storage very quickly indeed. Even users with massive 256GB storage models can find things get out of hand fast, so it’s even worse if you’re on the entry-level 16GB, or if you’re using an older 8GB model such as the iPhone 5c.

Apple’s latest and greatest iPhones are now widely available in the UK. Both handsets come in 64GB or 256GB models. But Apple for some that still might not be enough room. Thankfully there are plenty of quick and easy ways you can free up space on your iPhone. So we’ve gone through our iPhone and found the six biggest space hogs and the ways you can fix them.

But before we get started it’s important to note how you can quickly check out the amount of storage you have taken up and how much you have left. To do this open the Settings app and tap “General” then tap “iPhone Storage”. On the iPhone Storage screen, you’ll see your used and available storage space, as well as being able to view a complete list of your apps whose content is taking up the most space. This list is ranked from the biggest space hogs at the top to the lowest space hogs at the bottom. Tap on any app in the list to see your options for freeing up space in it.

Got it? Good. Now let’s move on to identifying the seven biggest space hogs and how to fix them.

This one is the most self-evident, yet it’s almost certainly the one all my friends forget to do when they call me up asking me how come the space on their iPhone is almost gone. If you don’t use apps just delete them. It really is that simple, and even if some are paid-for you can still re-download them via iCloud. Ideally, you only want the apps you actually stored on your iPhone. Everything else is completely expendable. 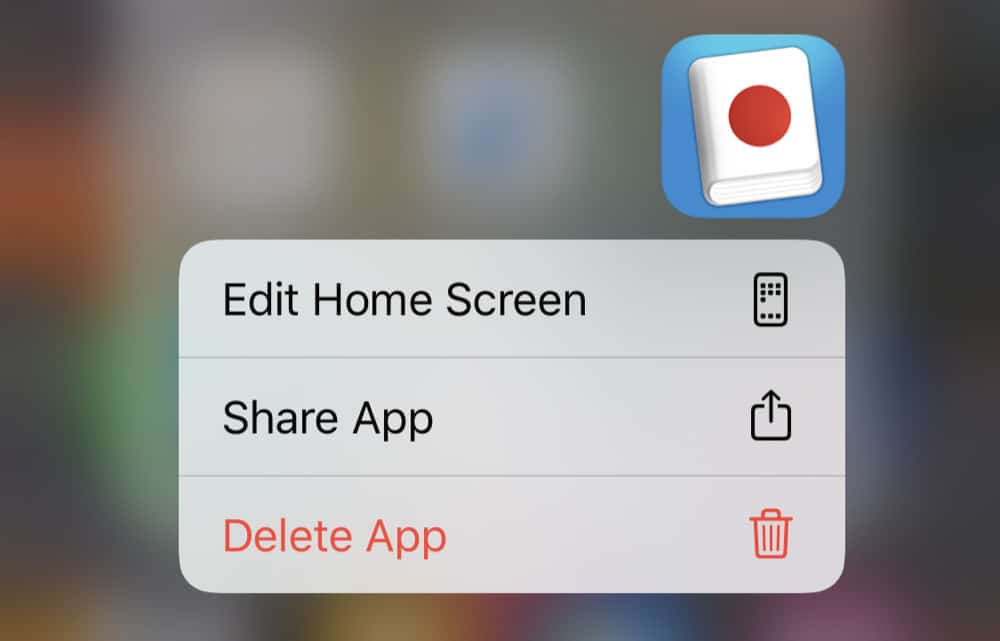 While many apps are only 10MB to 50MB in size, games can be 500MB to 3GB in size. Also, another genre of apps that are often quite large is reference apps, including any that have fancy 3D graphics (like science apps or history apps). So go through every app and game on your iOS device and if you don’t use it, get rid of it. To do so simply tap and hold its icon until it juggles and then tap the red Delete App button in the drop-down menu.

I love downloading movies to my iPhone when I have a long train or plane ride, but for 99.9% of the year, I have no use for having a full-blown 4K or 1080p HD video on my iPhone, right? The problem is I forget to delete these movies or TV shows when I’m done with them and that’s a very BIG problem, considering a two hour HD movie can take up to 3.5GB of space. So go into your Settings and under General>iPhone Storage, tap “Review Apple TV Videos”.

On the next screen, you’ll see all the videos downloaded on your iPhone. Tap the “Edit” button in the right-hand corner. A little red minus button will appear next to every video in the app. Tap it to delete any videos you don’t want.

Do the same for iBooks. Yes, most eBooks take up less than 1MB of space, but only if it’s a normal text eBook; many eBooks nowadays have fancy graphics or even videos embedded in them. Reference books are especially guilty of this. So go into Books submenu on the “iPhone Storage” screen and tap the “Edit” button. A little red minus button will appear next to every book on your phone.

And the great thing about deleting videos and books is you can quickly re-download them with just the tap of a button.

3) Only Save HDR Photos

Everyone knows that photos take up a lot of room on our devices, so it’s always good to go through and delete older photos in the Photos app. But what many people don’t realize is that a lot of the time any new photo they take is actually being saved as two images, not one, and this means your storage gets taken up twice as fast. 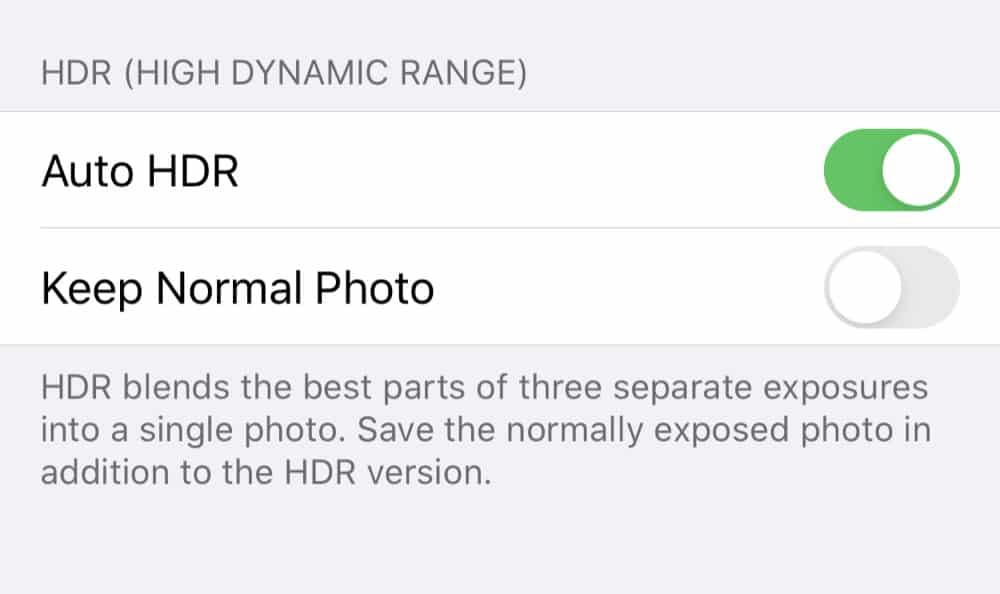 The reasoning behind this is because the iPhone allows you to take HDR images (three images taken at three different exposures and then combined into one image to give you the best look). But when you take an HDR image the original non-HDR image is also saved by default. Hence, two images.

To disable saving the original image (and if you’re just someone who likes taking the best snaps there’s little reason you should save the non-HDR image), go to Settings>Camera and toggle the “Keep Normal Photo” switch to off.

We all have apps taking up space we never use. But just which apps are those? iOS makes it easy to find out with the Offload Unused Apps feature. To access it, go to General>iPhone Storage. You’ll see a header called “Offload Unused Apps”.

Tap the “Enable” button and iOS will automatically monitor your iPhone’s storage. If it needs more space, it’ll automatically clear up space by deleting apps you never use anymore.

Your iMessage and email history can take up gigabytes of space, especially if you send or receive a lot of photos via text. In iOS there’s a  setting where you can automatically delete older messages. To enable this go to Settings>Messages and then under “Keep Messages” set it to 30 days or 1 Year. Also, be sure that you’ve set Audio and Video messages to expire after two minutes. 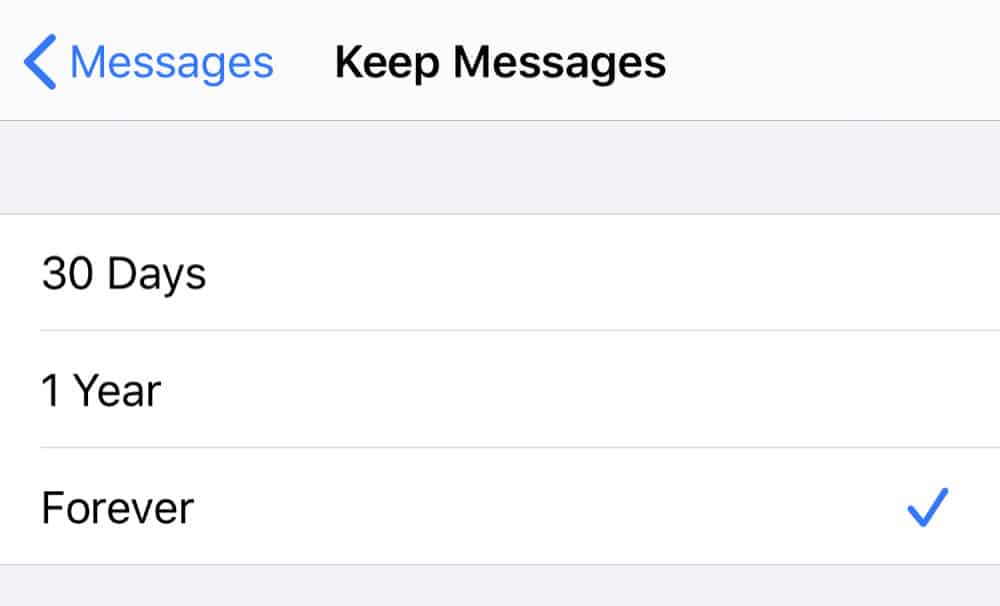 You can also delete entire threads individually by opening the Messages app and then swiping left on a thread and tapping Delete. Just be sure you’ve saved any photos you want to permanently hold on to before deleting the thread.

This last one isn’t a space saver tip that occurs to many people. However, Apple’s Visual Voicemails can quickly take up a lot of space on your iPhone if you never delete any of them. If you’ve only got one or two, it’s no big deal. But I know people who have every voicemail they’ve ever received still on their iPhone.

To delete individual Visual Voicemails go to the Phone app then tap on the Voicemail button. Find the voicemail you want to delete and then swipe left on it and tap the red Delete button.

You love shooting videos with your iPhone, right? Great–you should, because the iPhone is one of the best video cameras on the market because it’s the one you have on you at all times. Today’s iPhones can even record video at 4K resolution. But the thing is…that 4K resolution is eating away your storage space on your iPhone. 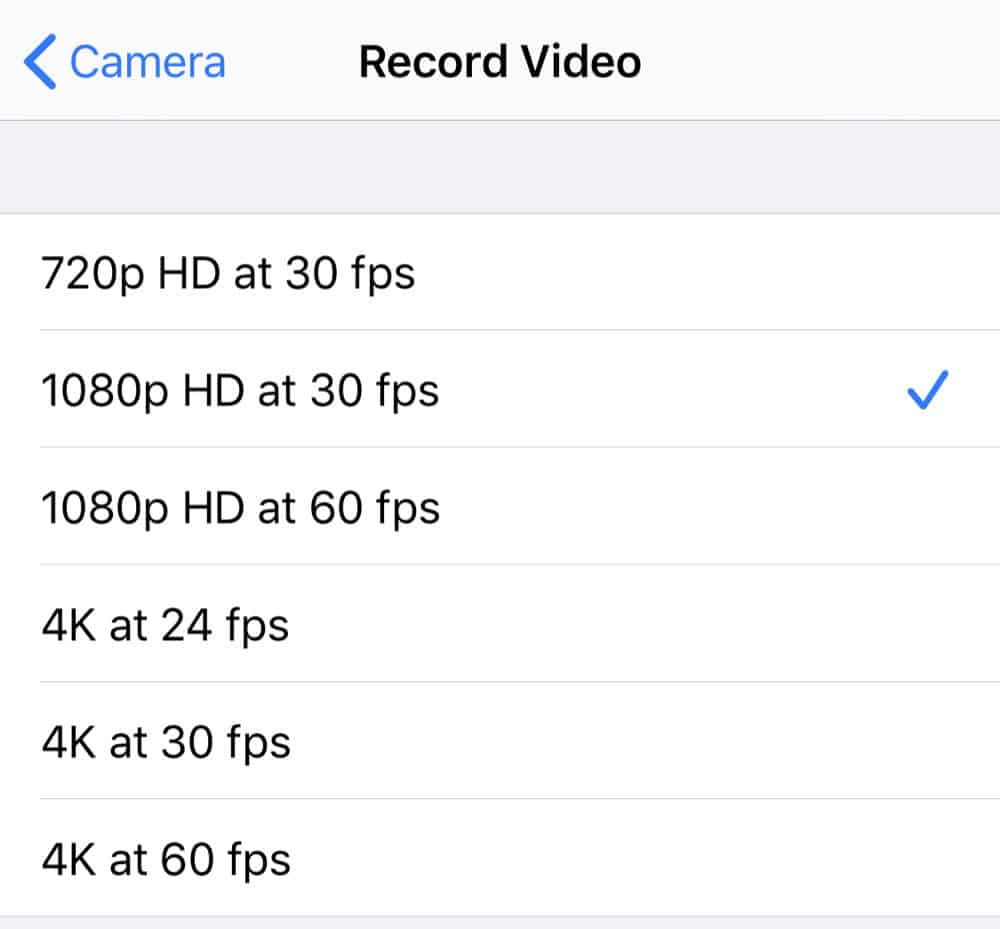 I know, 4K is great right? So why not shoot all your iPhone video at 4K? Because 4K takes up a massive amount of space on your iPhone. For comparison, look at the above video resolution settings. Now below look at the file sizes for those settings when you shoot 1 minute of video with each one:

In other words, if you’re shooting video on your iPhone at 4K resolution at 60 frames per second, you’re eating up almost half a GB of storage space on your iPhone for every minute of video recorded. Now unless you are filming for a professional project, like a short film, there’s really no reason to be recording iPhone videos at 4K, no matter if its 60fps or 30fps.

Most people are going to be fine shooting iPhone video at 1080p HD at 30 frames per second. Do this, and your iPhone storage will thank you. To change the quality your iPhone records video at, go to: Settings > Camera > Record Video and tap the quality you want.