If you frequently take international trips it probably means you’re switching out the SIM card in your phone a lot. As an iPhone user, Apple is kind enough to give a liquid metal SIM eject tool with each unit that makes popping your SIM card tray open a snap. Other phone manufacturers typically include a similar type of SIM card tray ejection tool as well.

MORE: A Quick Look At ALL The Color Options The iPhone 8 is Available In (Red’s The Best)

But though these included SIM ejection tools are incredibly useful, they’re only handy if you actually remember to bring them with you. That’s, frustratingly, something people don’t alway remember to do. Thankfully over the years, we’ve become somewhat of an expert at using alternative tools to open SIM card trays. Here are our top tips:

[NOTE: Use these alternative tools at your own risk. If you don’t do it carefully you risk damaging your SIM tray or snapping a piece of the alternate tool off into the ejection nodule in your device.]

How To Open iPhone SIM Tray Without The Ejector Tool

This is usually the easiest alternative SIM card tray eject tool to find. Simply remove the staple from any paper corner and bend one end open. Use the other curled end for leverage. Staples are the thinnest alternate tool on this list, so they have the best chance of working on any phone no matter the size of the SIM card tray’s ejection aperture.

A toothpick is a great tool to use in a jam, especially since they can often be found at airport restaurants in club sandwiches. I like toothpicks because they can be quite long and give lots of leverage. However, sometimes they are too thick. In this case, I usually snap the toothpick to produce a thinner, jagged edge.

3) A Push Pin Will Do Just Nicely

The trusty push pin is something you can find in virtually every office and thanks to its plastic head it gives you excellent leverage to push the tip of the pin into the ejection aperture.

A safety pin is also a good option. It’s strong, sturdy, and, by design, safe to carry with you since you can clasp the needle’s head in the hood of the device. A safety pin is something I carry in the change pocket in my wallet; its design makes it the easiest alternative SIM eject tool to keep with you at all times as it won’t poke you (like a push pin) or break (toothpick) or get easily lost (a staple).

Believe it or not, certain pens make great SIM ejection tools. The key is it must be fine-tipped–your average BIC pen isn’t going to do it. Look for a pen with a 0.3mm head or less then just uncap it and push away. Do note that with this method you risk smudging the area around the SIM card tray’s ejection aperture with ink.

If you wear an earring you’ll be happy to learn it’s not only fashionable by practical as well because it doubles as an excellent SIM card tray ejection tool. Just use the part of the earring your thread through your ear lobe. Don’t wear earrings? Usually, it’s not too hard to find someone nearby who does.

The final, and grossest, tool I’ve ever used in a pinch is my own fingernail. Yes, I’ve actually bitten off a part of my thumbnail and twisted it to make it thinner and stranger and then plugged it into the aperture of the SIM card tray ejection opening. Is this method a bit gross? Sure. But it’s also allowed me to have a working phone too.

Anything Else You Need To Know?

Nope, that pretty much covers everything you need to know about extracting a SIM from an iPhone when you’ve lost the ejector tool. One cool tip, however, so as to ensure you don’t lose the ejector tool again is to put it in your wallet or purse. We started doing this years ago and we haven’t lost one since. Just make sure that you take it out when you switch wallets.

MORE: How I Saved 40% on My Last iPhone Purchase (And Still Got A Flagship)

Got A Newer iPhone? Just Use The eSIM Instead

One cool thing with recent iPhones is that they support eSIMs. An eSIM is the digital version of a physical SIM card. It always lives in your iPhone and it enables your iPhone to have two phone numbers and two different data plans at once. This is because eSIMs can be used along with a physical SIM.

This is a godsend for people who frequently travel internationally. It means you can still make and receive calls from your primary phone number (just watch those roaming charges!) while also getting a local phone number and data plan in the country you just landed in–no SIM-swapping required! To use an eSIM you’ll need an iPhone XS, iPhone XS Max, iPhone XR or later running iOS 12.1 and later and a network provider that supports eSIMS. Here’s the full list of those that do. 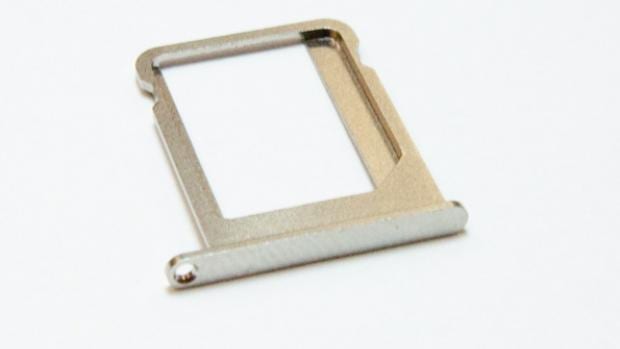