Amazon Echo Spot Smart Clock: All You Need To Know

Amazon’s announced its plans to release the Amazon Echo Spot smart clock in the UK, powered by the Amazon Alexa AI. Following success in the US, it’s landing in the UK market in late January with an RRP of £120 (or you can buy two for £200). You can pre-order it now and (in black or white) and it’ll ship on January 24.

The Amazon Echo Spot is a spherical clock with a built-in smart speaker much like Amazon’s other Echo branded devices. It features a 2.5in circular screen, which naturally shows you the time in its default mode as the clock-face, but it can also display other information too. You can customise clock-face to your tastes as well.

It also has a built-in camera. In many respects it is intended to be a smaller and more affordable version of the Amazon Echo Show; being a smaller device the speaker quality isn’t going to be quite as good, but it is cheaper and still comes fully-featured in terms of its personal assistant capabilities.

Likewise, it also has the ability to conduct video calls via the camera – you can call other Amazon Echo devices. You can also use a smartphone running the Amazon Alex app to ping music and video to the Amazon Echo Spot’s screen and speaker combination. The screen will also show you visual information on search results you conduct via voice commands, this is particularly handy if you’re searching for a product, as you can actually see an item and then buy it if you like the look of it.

The Echo Spot uses quad-mic array, compared to Amazon’s typical eight/seven mic arrangement on most of the Echo line-up, however, don’t expect this to impact its functionality in any noticable way. It also has a 3.5mm audio jack and Bluetooth capability, so you can pair it with other speakers and compatible devices.

Aside from the hardware, being loaded with Alexa means the functionality is continually evolving. Behind the scenes, just like rivals such as Google with the Google Assistant, Amazon is constantly tweaking and updating Alexa with a better user experience and more intelligence. A current focus is on better conversational features. Again, as with Google Assistant, these enhancements will come to existing devices already purchased by consumers through server-side patches and updates to the Alexa AI on Amazon’s end, so Alexa will become better without you having to do a thing. 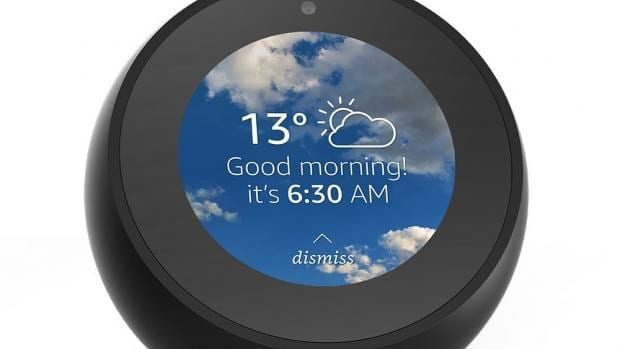