Is The Samsung Galaxy Tab S6 Worth It? Let’s Investigate…

Looking for a new tablet? Samsung’s Galaxy Tab S6 might just make you think twice about buying an iPad…

In the world of tablets, there is but one god: Apple’s iPad. Over the years, many have tried to topple Apple’s grip on the market but ALL have failed. One company that has stuck to its guns, however, is Samsung – it’s been pumping out tablets like nobody’s business since day one.

And its latest and greatest tablet, the Samsung Galaxy Tab S6, is well worth a look if you’re after a modern, high-spec Android tablet.

Let’s cover off the basics. First and foremost, the Samsung Galaxy Tab S6 is just about the most potent Android tablet you can buy right now. It runs on Qualcomm’s Snapdragon 855 CPU, packs in 6GB of RAM, and features a 7040mAh battery that delivers very impressive performance.

The display is killer too. You have a large 10.5in 2560×1600 AMOLED display that, true to Samsung’s usual form, is utterly stunning to behold and use on a daily basis. Forget what Apple fans will tell you; the Samsung Galaxy Tab S6 has the best display of any tablet on market right now. And that will remain the case until Apple shifts its iPads over to OLED.

On top of this, the Samsung Galaxy Tab S6 comes with a stylus, so you don’t have to pony up an additional $100 as you do with Apple’s iPad Pro and Microsoft’s Surface machines. And its the S-Pen as well; you know, the same one as you get with the Galaxy Note range. This is a good thing too because Samsung has been developing the S-Pen and its features for almost 10 years now.

And because of the nature of the Galaxy Tab S6, it’s large and lends itself to work like sketching, you’ll use the S-Pen a lot more than you normally would on one of Samsung’s Galaxy Note cellphones. Either way, the takeaway point here is simple: it comes with an S-Pen at no extra cost and Samsung’s S-Pen is brilliant, so you will actually have a good time using it.

Oh, and the Galaxy Tab S6 comes with four ear-melting speakers that kick out an epic racket, making this tablet great for watching and consuming content on – especially stuff like Netflix and YouTube.

The Galaxy Tab S6 has a 10.5in display and its bezels are just thick enough to stop any accidental finger inputs. Exact dimensions are as follows: 244.5 x 159.5 x 5.7 mm. And the Galaxy Tab S6 weighs in at 420g, making it light enough for travel and easy carrying inside a bag or satchel. And if you’re looking for a dedicated backpack for carting around all your tech, check out our review of the STM Myth backpack – it’s awesome.

The fit and finish of the Galaxy Tab S6 are superb. You will not find any creeks or odd bending. The entire package exudes quality from top to bottom. Basically, it looks as good as it costs. And this is a pricey tablet, so that’s a good thing.

With respect to ports and connectivity, you have SD-support, 1x USB Type C connector for charging and data transfer, an under-screen fingerprint scanner, Face Unlock, Bluetooth 5.0, and support for WiFi 802.11 a/b/g/n/ac, as well as WiFi Direct and Hotspot creation. The only thing missing a 3.5mm headphone jack; with the Galaxy S6 Tab, you have to use wireless headphones.

In order to better compete with Apple’s iPad Pro, Samsung has included full DEX support inside the Galaxy Tab S6, and if you want on-the-go laptop-style functionality, you can buy Samsung’s Book Cover Keyboard case which effectively turns the Galaxy S6 Tab into a laptop, complete with keyboard and trackpad. The Book Cover Keyboard does not come included, however, so you’ll have to pony up an extra $179 for one.

The Samsung Galaxy Tab S6 is available in just two colors: Mountain Grey and Rose Blush. As you can see below, the Rose Blush is louder and more engaging to look at, whereas the Mountain Grey model is more professional-looking and understated.

The Galaxy Tab S6 is kitted out for performance. Samsung knew that this tablet would be seen as the #1 iPad competition from 2019 onwards, so it made sure the specs and hardware were built to go the distance. It doesn’t disappoint, either – all the benchmarks we took were exemplary – it scored 352,209 in AnTuTu 3DBench and 2392 in GeekBench.

In terms of in-the-hand performance, which is actually all that matters, the Galaxy S6 Tab is phenomenal. It’ll handle anything you throw at it with ease. From intensive media-creation apps to gaming, the Galaxy S6 Tab will munch through pretty much any task with plenty of performance to spare, thanks to its potent SD SoC and ample amount of memory (our unit has 8GB of RAM)

Bottom line? If you’re concerned about performance, you needn’t be – the Galaxy S6 Tab is a monster in this respect, just like Samsung’s Galaxy S20 phones.

Even The Cameras Are Pretty Good…

I’ve never taken a photo with a tablet, but I have seen people doing it – usually while on holiday. Apparently, 86% of Samsung’s Galaxy Tab S4 users used the camera on that tablet every day, according to Samsung. Odd? Yes. But this does explain why Samsung outfitted the Galaxy S6 Tab with such a decent camera – both on the front and the rear.

The rear-facing camera is a 13MP setup that will take moderately respectful photos; images are clear with decent coloring. It’s not going to rival your Galaxy S20 or iPhone 11 Pro, but it is definitely well above average for a tablet camera.

On the front, you have an 8MP camera with a resolution of 1920×1080. This front-facing camera delivers HD quality video for video-calling and is decidedly better than the one you find on Apple’s latest iPad models. If you do a lot of video-conferencing, as most of us do nowadays, the Galaxy S6 Tab is a brilliant option in this context.

How Much Does The Samsung Galaxy Tab S6 Cost?

The LTE model is definitely worth a look though, especially if you’re looking for a tablet that you can use on the move. If working on the go is your thang, stretching to the LTE model might be worth it, though I’d still be more inclined to save some money and tether the tablet to my phone’s data – if you have an unlimited data plan (like this one), this is the way to do it.

Either way, if you do go for the Samsung Galaxy Tab S6, and you get it direct from Samsung, you can use Samsung’s finance program and split the cost of the tablet over a period of months to make the cost more manageable – you can get it for just £29.99 per month. For 99.9% of people, this is the way to buy things like high-end tablets and phones.

You should avoid contracts and 24 month plans like the plague when at all possible.

Wrapping Up: Is The Samsung Galaxy Tab S6 Worth Buying?

When it comes to tablets, you basically have two options: one of Apple’s iPad models or, if you go the Android route, the Samsung Galaxy Tab S6. You could go with one of Microsoft’s Surface PCs which also double as tablets, but when it comes to truly mobile solutions (meaning products that run on Android or iOS), the market is pretty darn narrow and is dominated by Apple and Samsung.

For me, the Samsung Galaxy Tab S6 is definitely worth a look, especially if you’re more of an Android user than an Apple one. Samsung has built the Galaxy S6 Tab to rival all iPad models. It has DEX, so it can be used as a PC, it has great specs, so it’s powerful and performs great, and it is has a brilliant AMOLED display that is as good as anything Apple makes. 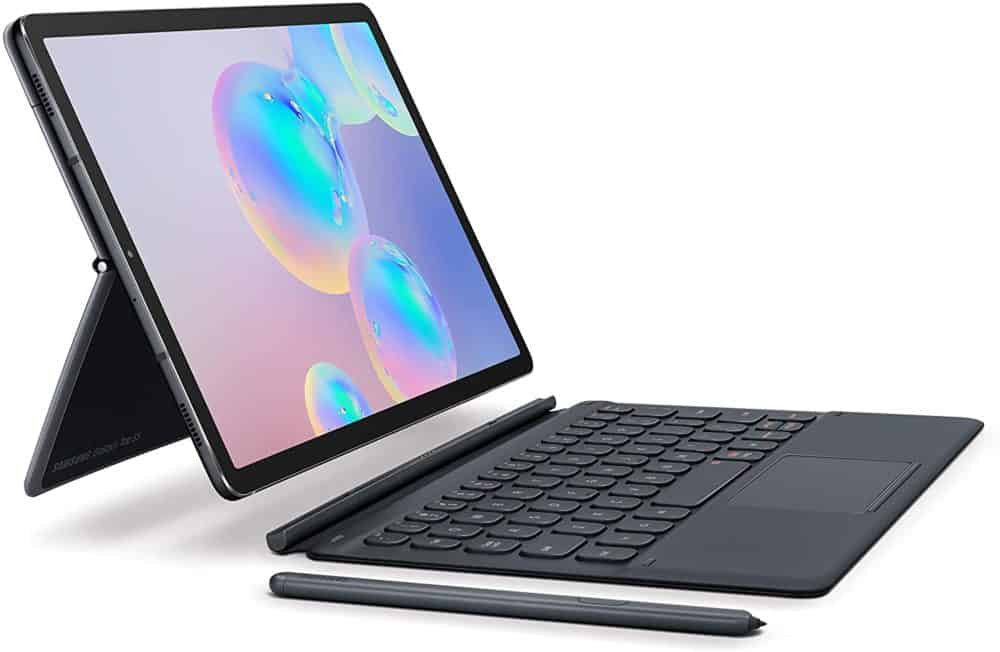 I would like to have seen more cross-over with Samsung’s phones, if I’m honest; there’s a big opportunity here for Samsung to offer more integration between its devices, adding in more connectivity and syncing, but, for whatever reason, this hasn’t happened just yet. Still, from a performance and specs perspective, the Samsung Galaxy Tab S6 is hard not to like – it looks great and it performs brilliantly in all usage cases.

Where To Get One?