Apple’s iPadOS 14 here – and it’ll affect every iPad made in the last six years. Here’s a breakdown of its new features…

Apple’s iPadOS 14 update is here. It launches alongside the new iPhone 12 range and new iPads. iPadOS 14 is the second generation of the iPad’s dedicated OS (the “14” in the name is just to retain the same numbering scheme as iOS, which iPadOS is based on). It’s also the biggest software update the iPad’s ever received.

Here’s a breakdown of iPadOS 14’s new features and what to expect from the software update later on in 2020. 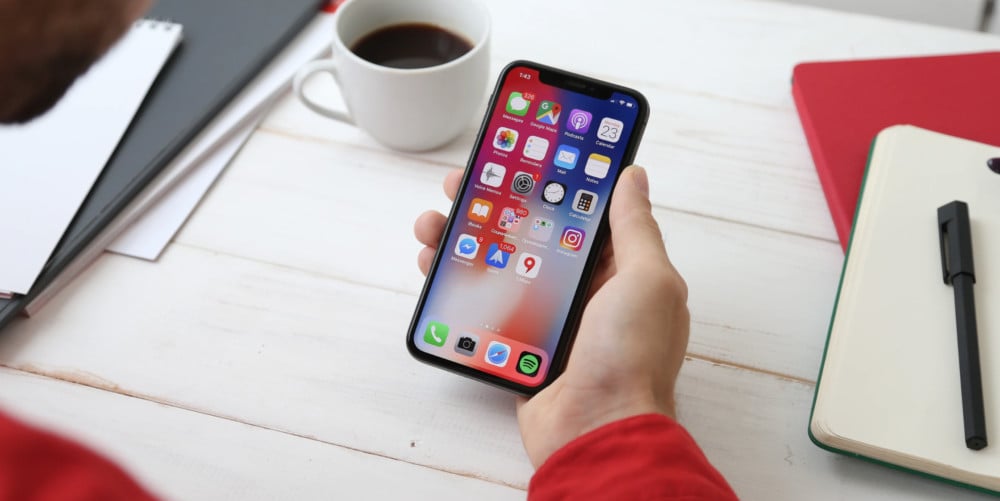 Apple unveiled the beta version of iPadOS 14 at its WWDC event in June, before rolling the update out in the fall, alongside its new iPads and iPhone 12 range of phones.

The new operating system is available today in beta and is packed with a TON of new features (see below). Here’s how to get the beta RIGHT NOW!

Another big feature of iPadOS is that several apps will become more desktop-like. This will be achieved, Apple says, by adding “sidebars and pull-down menus let you quickly and easily access more app functions from a single location, without switching views.” Expect to see sidebars pop up in popular apps like Files and Photos–just like on macOS. 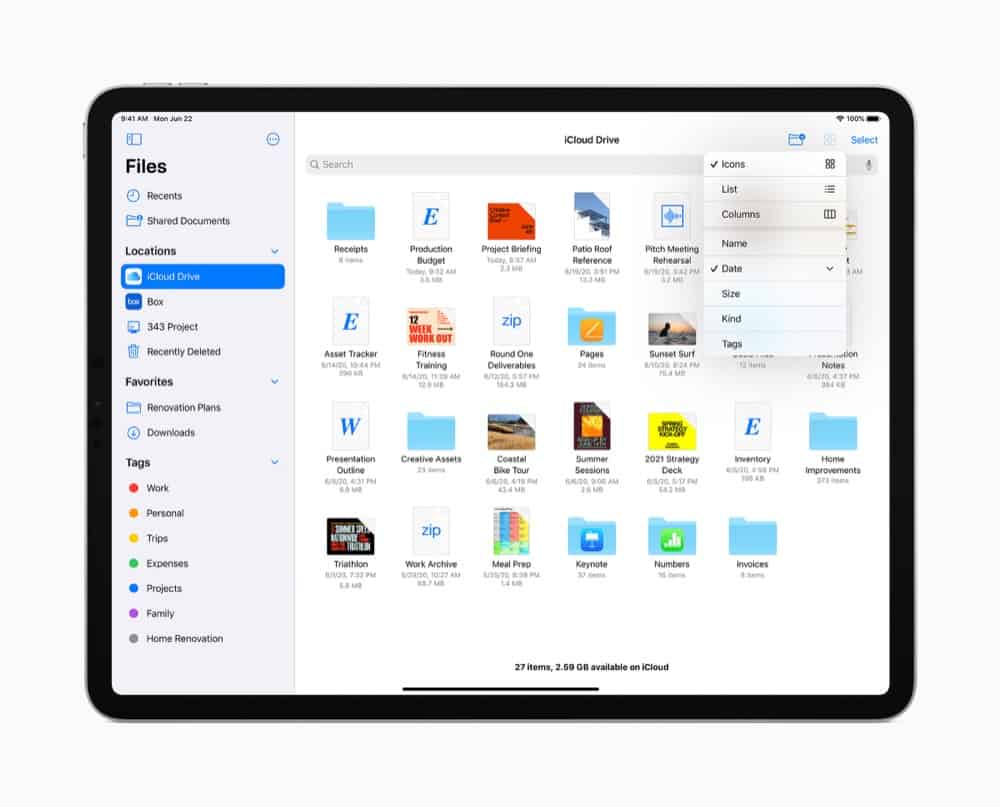 Another big headline feature of iPadOS 14 is the iPad will now support home screen widgets. Yep, this is similar to Android. Now you can add as many widgets as you want to your iPad home screen alongside the regular app icons already there. Previously widgets were only available in the Notification Center.

And the widgets in iPadOS 14 will be much more dynamic, colorful, and you’ll be able to choose between three different sizes for each widget. The larger the size you choose, the more information displayed in the widget.

You know how some of Apple’s core applications properly suck? I’m looking at your Mail. Well, this will change in iPadOS 14. Apple is giving third-party apps core access to iPadOS, so things like Gmail and Firefox can now become your default apps instead of Mail and Safari.

Out of all the features on this list, this is the one I am most excited about. It’s time the iPad became less locked-down and more malleable to the needs and wants of its user–like a proper laptop.

This is one of the BEST features of iPadOS 14. Thanks to Scribble, you can now use the Apple Pencil to write in ANY text filed in iPadOS. This means you can literally write in cursive in a search field and iPadOS will convert your handwriting to text. This is a game-changing feature and one can only hope Apple brings both Apple Pencil and Scribble support to iPhone in the future. 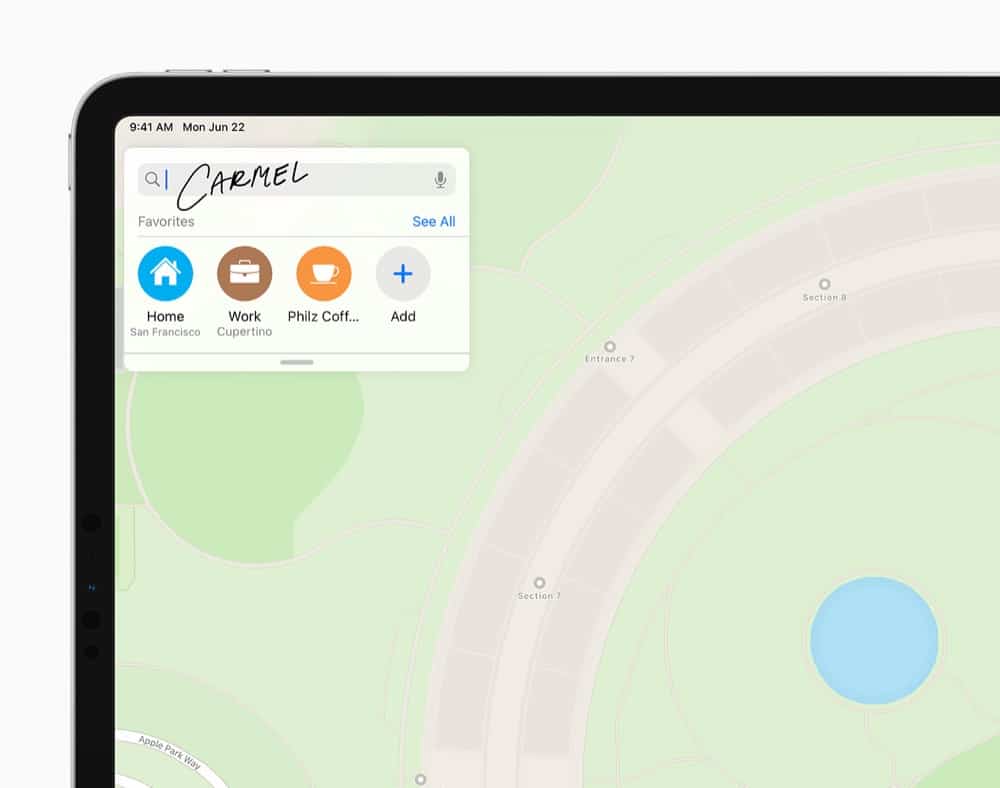 Slack is one of the biggest productivity communication apps on the planet. It has made working remotely (or in an office) a lot easier, thanks to its easy-to-use settings and intuitive features. And inside iPadOS 14, Apple will borrow a few of Slack’s most-loved features.

iMessage users will be able to tag their contacts in iMessages using the @user-name handle, just like in Slack. On top of this, iPadOS 14 will bring the ability to retract messages sent in iMessage, even after they’ve been sent to a recipient. Typing indicators for group chats are also making an appearance in iPadOS 14 as well. 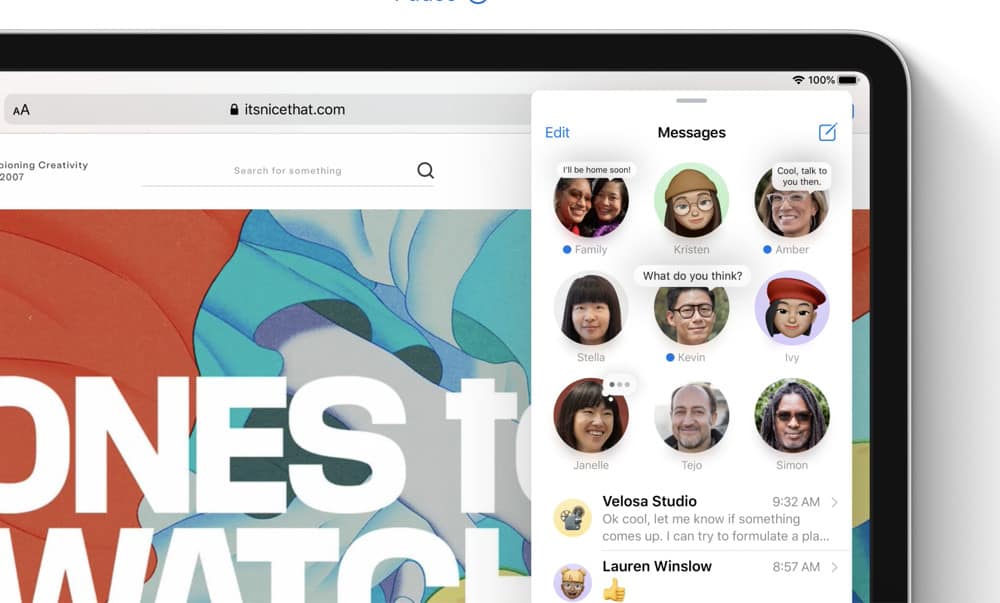 Another cool feature is the ability to reply to specific messages in a thread, just like you can with WhatsApp. You can now also pin important conversations to the top of the Messages app.

This one is HUGE. Since iPadOS first came into being, it’s basically had the same dialer screen. This dialer screen took up the ENTIRE display of your iPad whenever you received a FaceTime call. But in iPadOS 14, when you get a new call, you’ll see a slim notification up top. The rest of your screen still shows so you aren’t taken out of what you were doing. 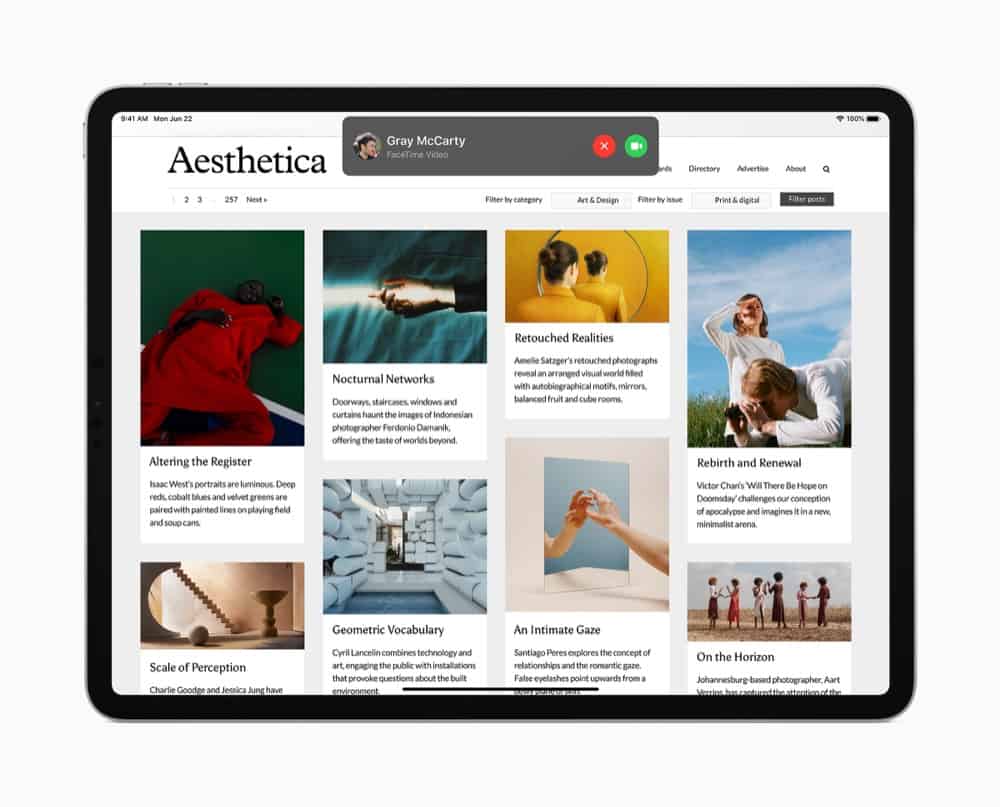 To answer the call, simply tap the green answer button. Or to decline the call, just swipe the notification away.

Another massive improvement in iPadOS 14 is the new picture-in-picture mode for FaceTime. Now when you are FaceTimeing with someone the FaceTime window doesn’t have to take up the full display!

In iPadOS 14, you can minimize the FaceTime window so it’s just a small rectangle on your display. This frees up the display for other things, like scrolling through the Calendar app so you can check if you have time on Tuesday to meet with the person you are FaceTiming with. Pretty cool!

Maps is getting some big updates in iPadOS 14, too. The most useful of which is probably cycling directions. Now you can bike on the route best suitable to the mode of transport instead of having to rely on car directions. Speaking of cars, Maps will now also show electric vehicle charging points on the map. 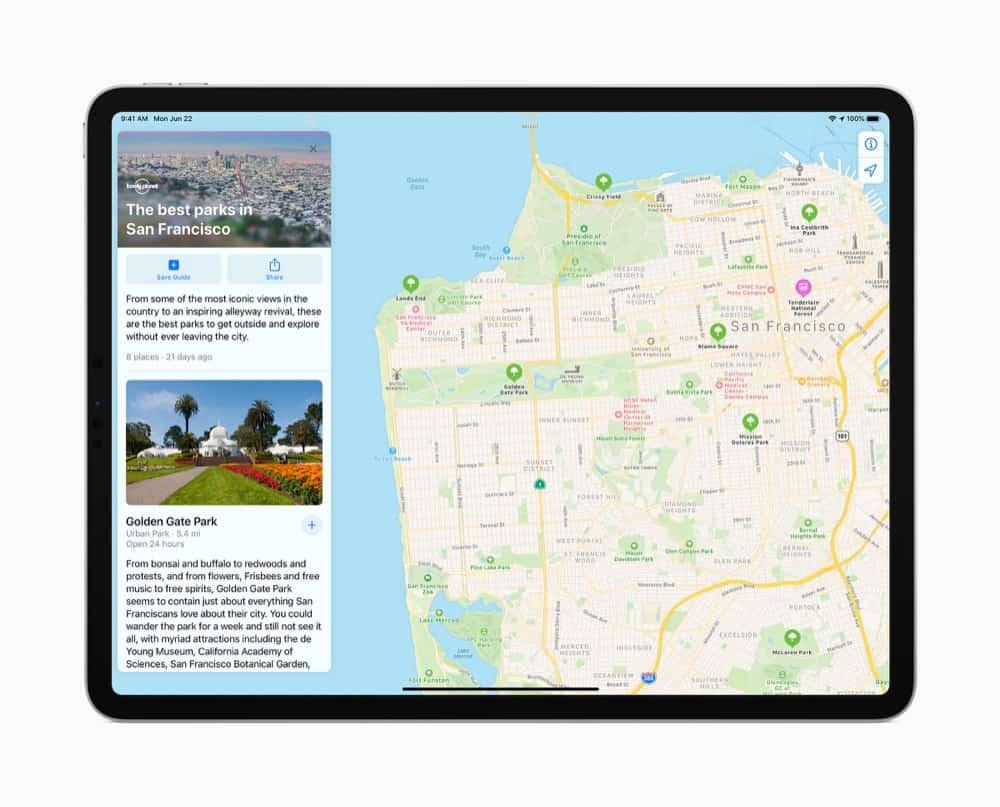 Another great enhancement is guides. Now the Maps app will offer guides for various cities. These guides will be curated by competent third parties, like Lonely Planet and Time Out.

One of the most unexpected surprises of iPadOS 14 is the new Translator app. This app allows you to translate your speech in real-time so you can communicate with someone in a different language. It’s a cool app–and all the translation happens on-device, so not even Apple knows your conversations.

“Shot on iPhone” is Apple’s photography competition, whereby images snapped by iPhone users are used in Apple marketing materials. Well, inside iPadOS 14, you will be able to submit your work directly through the Photos app. The Photos app is also gaining new organizational options.

Siri is also getting iPadOS 14 improvements. The biggest one is Siri will not take up the entire display when you interact with it. Instead, Siri will just appear as a little floating icon on the bottom of the display. Siri results will then appear in a notification at the top of the display. 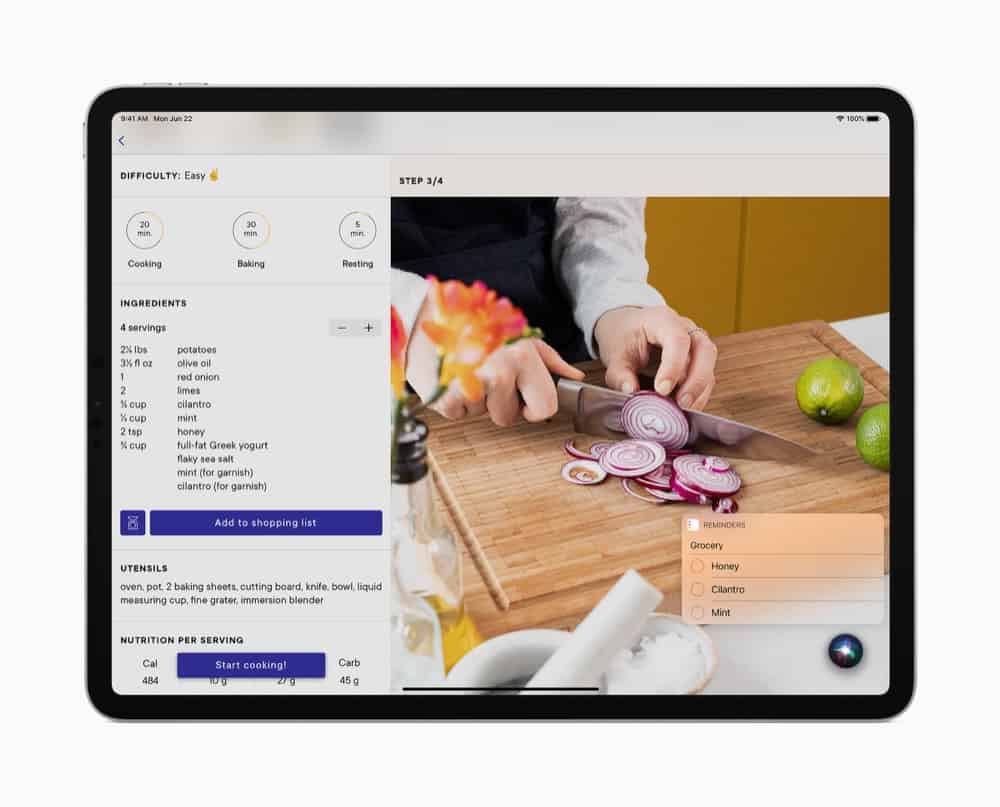 Siri is also getting better at sourcing answers. Oh, and now keyboard dictation (which is run by Siri) will NOT require an internet connection and run entirely locally on your iPad!

Apple is adding a slew of privacy features to iPadOS 14. The biggest one is “Approximate Location.” This allows you to grant an app access to know your general area, while not giving it your precise location. This means you can let a weather app know you are in New York, while not letting it know your exact address.

Other privacy enhancements include privacy “nutrition labels” for apps, which tells you what data those apps want access to, and Safari now has the ability to alert you when one of your passwords for a website has been hacked in a data breach. 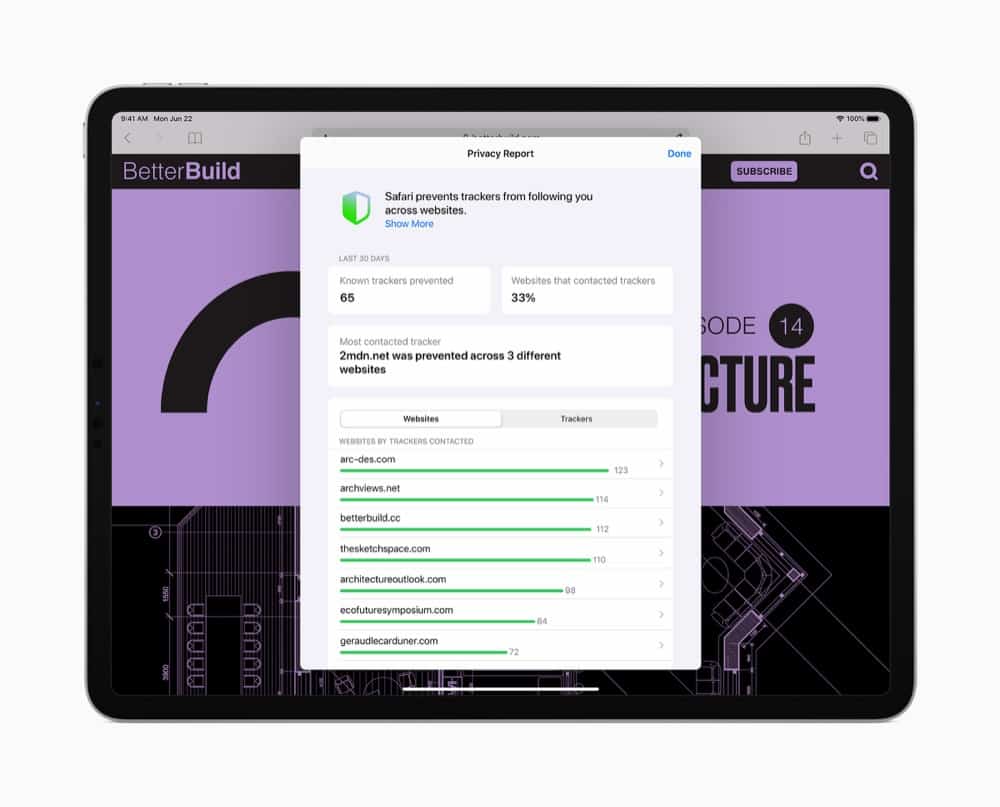 We already told you about Scribble, above which will let you use the Apple Pencil to write in any text field. But iPadOS 14 is also gaining a powerful new auto-shape feature. This allows you to draw rough shapes with your Apple Pencil, say, a star, and now iPadOS 14 will convert that rough shape into a perfectly shaped object, no matter if it’s straight lines or curves.

With iPadOS 14, major improvements are coming to Home–the operating system’s integration with smart home devices like security cameras and doorbells. Our favorite: now iPadOS can leverage the people in your Photos library and cross-check the image of someone who appears in your security camera video feed. iPadOS will then alert you whenever someone who is recognized shows up on your camera’s feed.

Speaking of Home, in iPadOS 14 you can set “activity zones” for your security camera feeds. An activity zone is an area that you are telling iPadOs is very important–like the back gate in the feed from the back yard. After defining an activity zone, iPadOS can send you a notification when there’s movement in that precise location of the feed.

The iPad is getting MUCH better search features in iPadOS 14. The biggest difference is a new compact search window that allows you to stay focused on the work that’s already on your screen. But now search also has improved real-time results as you type! 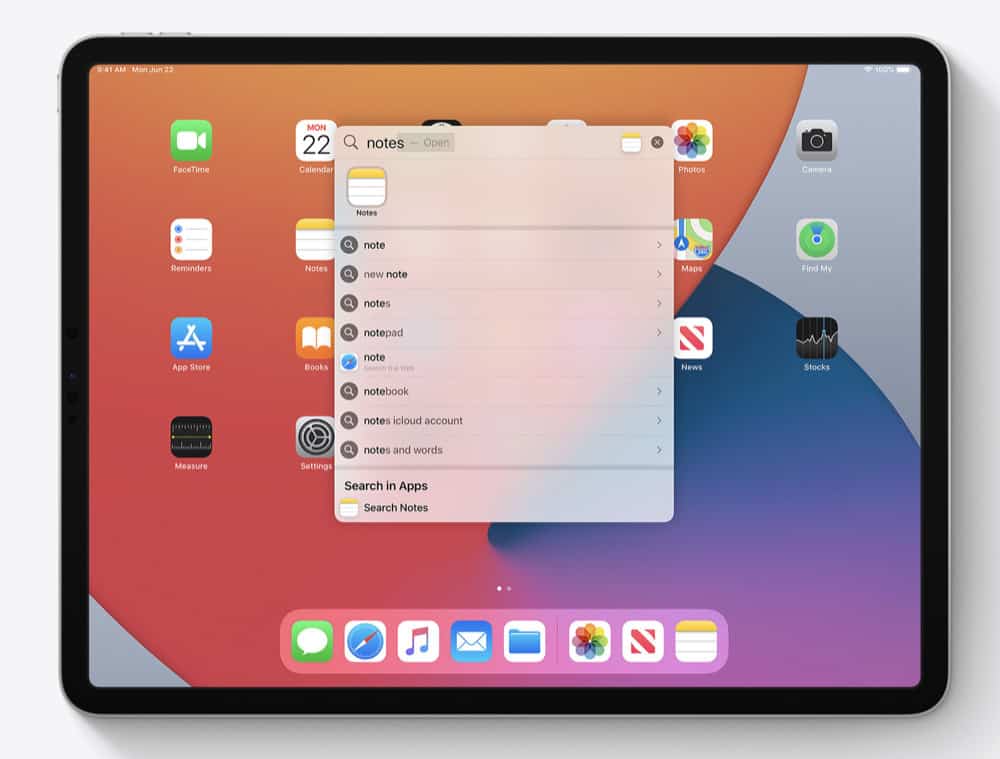 This one is AMAZING. We’re all familiar with surround sound, but with iPadOS 14, your AirPods will be able to produce what’s called “spatial audio.” This blows surround sound out of the water. Instead of just hearing the left and right channels when listening to your AirPods, the sound will now appear to come from all around you in a 360º sphere. And with dynamic head tracking, the sound will stay synced no matter if you move your head or your device.

And lastly, Apple’s iPadOS 14 update will be available for iPad models including the iPad Pro, iPad (5th generation) or higher, iPad mini 4 or higher, or an iPad Air 2 or higher. 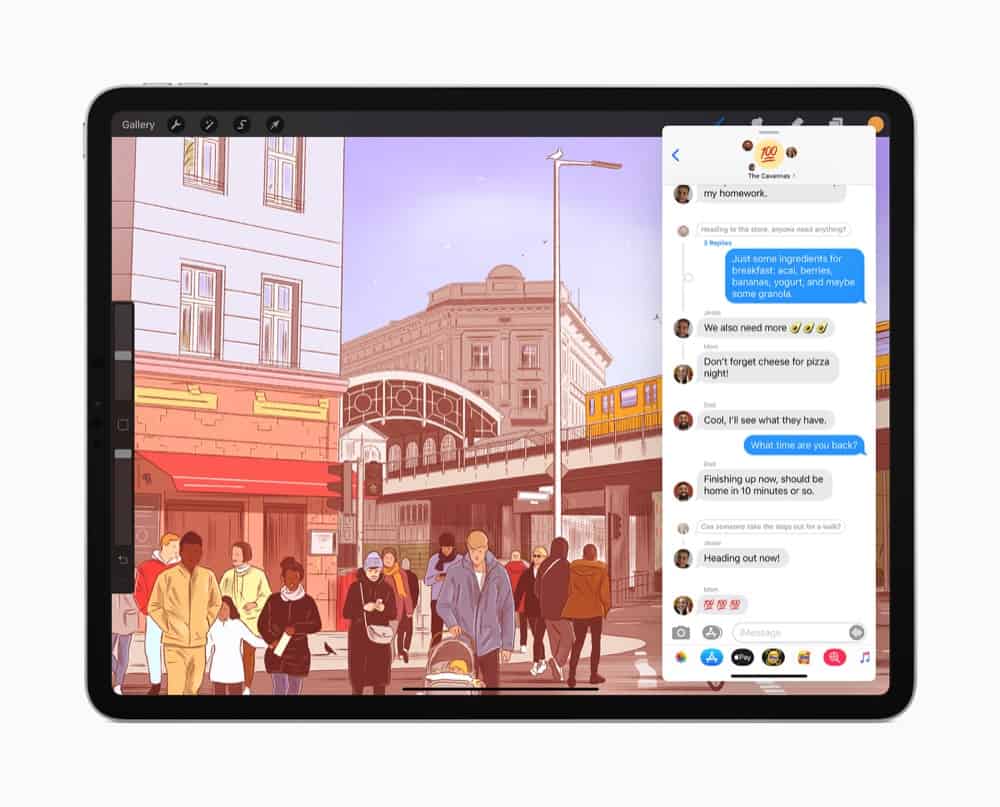