The Samsung Galaxy Note 20 is coming later this year. It’ll be a BIG update over the Note 10. Here are 20 quick points on what to expect…

A German site has just leaked a TON of information about the Galaxy Note 20 Ultra, including specs (which you can see below) and some images. First, let’s take a look at the alleged specs and updates said to be coming to the Samsung Galaxy Note 20 Ultra:

How much will all this cost? A LOT of money; I wouldn’t be surprised if this phone started at $1500 given just how many updates and tweaks Samsung is bringing. If it retails for the same as the iPhone 11 Pro Max, I’ll be very impressed – I just don’t see that happening. Not with all these updates and tweaks.

Many assumed the Galaxy Note 20 was coming with four camera lenses on the rear. And that might still happen. But Evan Blass’ recent leak (and his leaks are always solid) shows that at least one of Samsung’s Galaxy Note 20 phones will come with three (not four) cameras on the rear.

I feel like, with a leak such as this, several hours of exclusivity for Patreon subs should suffice. Many of you have been quite patient. 😊 pic.twitter.com/MqxzlRpD5e

As with Samsung’s Galaxy S21 phone, there will be more than one Galaxy Note 20 model. It is possible that the Note 20 shown in the leak is the entry-level model. Alternatively, it is also possible Samsung has done away with the four camera units on the range, although I don’t think this is likely.

Additional reports have revealed that Samsung may be using the Exynos 990 inside the Note 20 instead of the newer 992 SoC. There is also talk of Qualcomm’s Snapdragon 865 running in the handset, or, perhaps even the 865 Plus, though this will depend largely on whether Samsung had time to integrate the newer chip.

The latest FCC filing for the Galaxy Note 20 confirmed a phone with a Snapdragon 865, WiFi 6, and 5G connectivity. But as always there will be more than one model, so it is possible Samsung will use different types of CPUs inside the range – from its own Exynos to different versions of Qualcomm’s Snapdragon.

Samsung has confirmed when the Samsung Galaxy Note 20 range will launch; the event will take place on August 5, so a little earlier than expected, and the phones (there will be more than one, and likely a Note 20 Ultra model too) are expected to get a release date on August 20.

Obviously, because of the current global pandemic, the event will likely be held online, just as Apple’s recent WWDC 2020 conference was. This means everybody will be able to watch the event via Samsung’s store and/or YouTube channel.

On top of this, Samsung is also expected to launch the successor to the Samsung Galaxy Fold alongside the Galaxy Note 20. Likely called the Galaxy Fold 2, the handset will pick up where its predecessor left off, adding in refinements to the design, software, and internal spec and hardware.

There is talk of the Samsung Galaxy Fold 2 retailing for less than the Galaxy Fold; this would be a good thing, though it will still retail for well over $1200/£1200 – so don’t expect anything approaching an accessible price.

Samsung’s got a pretty big update for its S-Pen planned, one that will improve its latency and bring it in line with Apple’s ultra-expensive Apple Pencil

The incoming Galaxy Note 20 range has been leaked plenty of times over the past several months. We know plenty about its display, its internal specs, and also how much models there will be – including the prospect of a Galaxy Note 20 Ultra.

But what about the S-Pen? How will that be improved this time around? According to leaked information, Samsung will improve the latency of the S-Pen aboard the Galaxy Note 20 range, bringing it in line with the Apple Pencil.

Samsung’s new Note 20 S-Pen will have a 9ms response time, apparently, equaling Apple’s Apple Pencil. On top of this, the Galaxy Note 20 will also possess a 120Hz refresh rate display and, unlike the Galaxy S20, it will be QHD+ as well. This will make both drawing and note-taking on the Note 20 a lot snappier than on the current Note 10 range.

But what does the Galaxy S20 tell us about the Galaxy Note 20? Quite a bit as it goes. And we can fill in the rest of the blanks using leaks and rumors to build a fairly robust picture of what the Galaxy Note 20 range will be like once it arrives later this year. As always, there’s a ton of information online about this phone. For this reason, we’ve decided to distill it ALL into 20 quick points that cover everything you need to know about the Samsung Galaxy Note 20.

#1) It won’t be called the Galaxy Note 11; this is kind of a given, but it is worth noting as there are still plenty of people searching Google for “Samsung Galaxy Note 11” – remember, kids! It’s Galaxy Note 20, not Galaxy Note 11!

#2) The S20 range uses 120Hz OLED panels. These will almost certainly come to the Note 20 range, bumping up the display performance considerably over the outgoing Note 10’s 60Hz display. It will have DOUBLE the refresh rate, so even if Samsung didn’t change anything else about the phone, the display would look considerably better than the Note 10’s.

#3) The Note 20 is codenamed “canvas” inside Samsung HQ. This implies there will be some major updates to the S-Pen that will be great for users looking to create artwork on the Galaxy Note 20. Similarly, the Note 10 was codenamed DaVinci. Why? Because it was a brilliant do-all device.

#4) MicroSD could be returning on the Galaxy Note 20, though it does come with some caveats. According to reports, Samsung is thinking of knocking down the entry-level storage to 128GB (from 256GB) and filling the gap by reintroducing SD support.

#5) Samsung’s NEXT-GEN OLED panels have now entered production, meaning they will be available for use inside the Galaxy Note 20 – sorry, S20 users, you just missed out! Here’s what Samsung said about the new panels: “Our 5G-optimized OLED display is taking the lead in the 5G era with its crystal-clear imagery, distinguished designs, economical power consumption, and increasingly eye-protective functionality.”

#6) The Galaxy Note 20 will use the same camera setup as the Galaxy S20 range. The only question now is how many Note 20 models will there be? And will any of them use the Galaxy S20’s EPIC 108MP sensor? Here’s hoping one of them does…

#8) Like the Galaxy S20, the Galaxy Note 20 range will use either Qualcomm’s Snapdragon 865 CPU and Samsung’s own Exynos 990 CPUs. Again, what you get will depend on what region you’re in – the USA gets Snapdragon, everywhere else gets Exynos.

#9) ALL Galaxy Note 20 models will support 5G connectivity and Wi-Fi 6 as standard. There will not be separate 4G and 5G models.

#10) Another option for the Galaxy Note 20’s CPU is Samsung’s newly unveiled 7nm and 6nm CPUs which the company claims are more power-efficient for 5G, provide more performance for intensive applications and allow for smaller and thinner handsets. These chips are due in Q1 2020, so could we see one inside the Note 20? Perhaps.

#11) Improvements to DeX? This isn’t Galaxy Note 20 specific, but it is something we’d like to see improved with the release of the Note 20. In our experience, DeX, while very useful, can be a tad too laggy. If Samsung could make some optimizations here, it would be a huge boon for Galaxy Note 20 users that want to use the phone as a PC in their home.

#12) The Galaxy Note 20 base model will likely ship with 12GB of RAM, though the higher-tier models (remember, there could be three Note 20 devices altogether) could come with as much as 16GB.

#13) The Samsung Galaxy Note 20, if previous Note launches are anything to go by, will likely get a release date in August 2020. Every single Galaxy Note, save for the Galaxy Note 8, got a release in August and we don’t really see why Samsung would mess with the formula now unless the coronavirus upsets production…

#15) Samsung will use the same hole-punch camera as the Galaxy S20/Note 10 range again on the Galaxy Note 20. However, there is also talk of an under-screen camera unit as well. If true, this would be the first instance of this type of tech being used on a Samsung phone.

#16) With respect to biometrics, we could see Samsung switch over to Qualcomm’s 3D Sonic Max fingerprint scanner which provides snappier performance over Samsung’s own solution. This isn’t a given, however, as Samsung DID NOT use this setup for its Galaxy S20.

#17) We might see a 5000mAh battery included inside the top-of-the-range Galaxy Note 20 Ultra. Samsung has already used this size cell inside the Galaxy S20 Ultra, so its inclusion in the Note 20 range makes a lot of sense. Chuck in 45W or 60W fast-charging and the Galaxy Note 20 could well be one of the best phones for battery performance inside 2020/21.

#18) The Note 20 probably won’t launch with Android 11. Instead, users will have to use Android 10 for the first few months. The update to Android 11 for the Galaxy Note 20 will most likely land in December 2020 or early Q1.

#19) There are multiple rumors about a Galaxy Note 20 Lite model. This model would be a cheaper alternative to the standard and Pro/Ultra models. How much would it cost? Probably around the same as the iPhone 11, so about $699.99. Nothing is confirmed yet, but this kind of handset would make a lot of sense, especially if Samsung is hellbent on increasing the price of its new Note 20 phones.

If you’re curious about what the Samsung Galaxy Note 10 will look like, check out ALL the leaked images of the phone below. As you can see, in most shots, it’s not that dissimilar to the outgoing Galaxy Note 10. 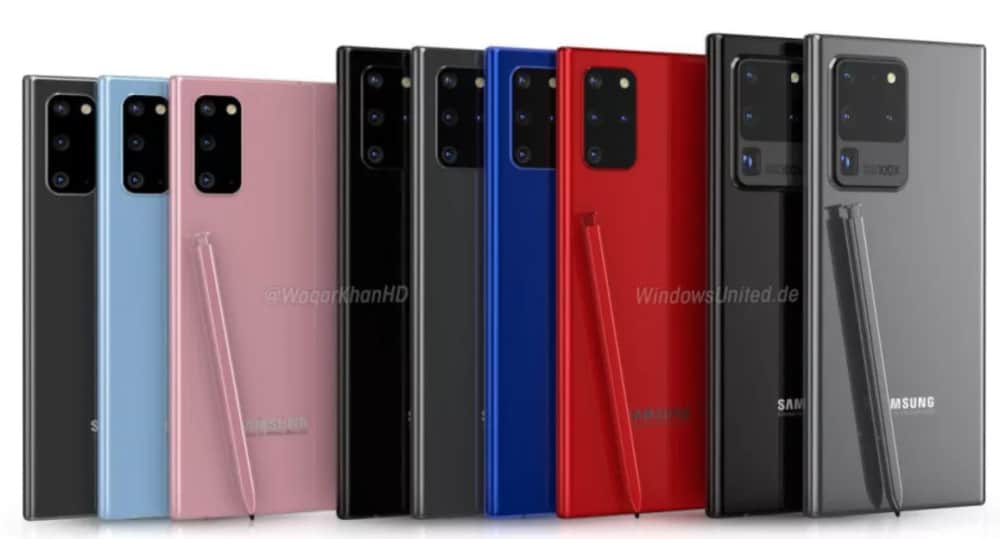 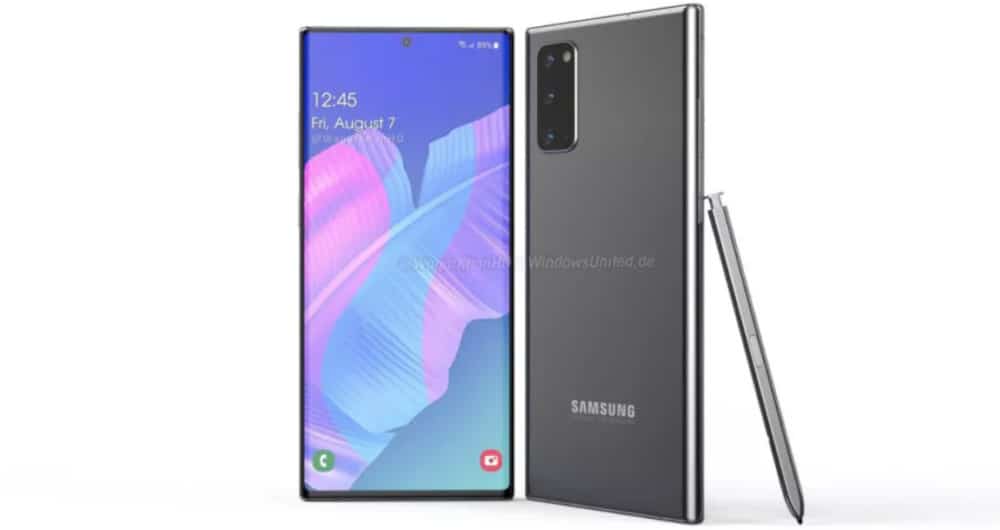 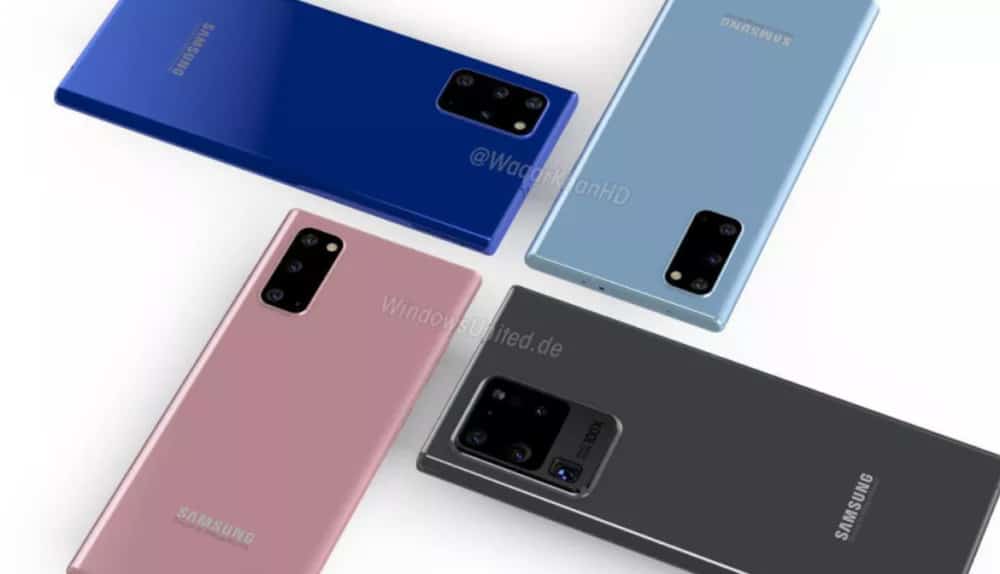 Wanna Save 40-70% on iPhones, Macs, & Apple Watch? Check Out mResell For Details…