Interested in buying a foldable phone in 2020? Here’s a quick and simple list of ALL current foldable phones as well as the ones that are rumored to be coming in 2020

Foldable phones – alongside 5G – are two of the biggest trends happening in 2020, and both are kind of controversial although for different reasons. The biggest thing you have to consider when buying a foldable phone is the price – foldable phones monumentally expensive.

The second is whether or not these handsets will be around for the long haul – many believe they are just a fad. And there’s data to back this up too. Either way, foldable phones are still pretty damn exciting. I mean, when was the last time you saw a phone with a completely new and novel design?

If you’re in the market for a foldable phone, the following handsets are either currently available or coming inside 2020.

Want to know more about the foldable phones listed above? Read on…

Are you a cash-rich, die-hard early adopter that loves a challenge? If so, the Huawei Mate XS could be the phone you’ve been waiting for. This foldable Android phone costs £2343.00 and, thanks to Huawei’s growing issues with the US government, does not feature any of Google’s core Android applications or services.

That means no Google Play, no Google Maps, no YouTube, and no Chrome. On top of this, because the phone does not come with Google Play, installing applications like Facebook and Instagram, applications we all take for granted, is now essentially impossible. And that’s no Bueno for a phone that costs almost two and a half grand!

Still, at least the Huawei Mate XS’ specs are decent:

The Samsung Galaxy Fold is perhaps the most well known foldable phone to date. It took Samsung years to get this phone to market, and along the way there were plenty of issues. Even after the phone got released, things didn’t exactly go to plan. Eventually, things turned around and the Galaxy Fold is now out in the wild and available to buy, providing you can stump up the £2000/£2000 asking price…

The Samsung Galaxy Z Flip is a foldable phone like the Galaxy Fold, only here the phone folds like old-school clam-shell phones from the 1990s and early 2000s. It’s also cheaper than the Galaxy Fold, though it is still VERY pricey at £1300 if you’re buying it outright.

In terms of specs, you’re looking at the following:

The Microsoft Surface Duo is perhaps one of the most interesting foldable phones coming to the market in 2020 (it’s due to land in time for the holidays). It features a novel foldable design, runs Android at its core, but will also benefit from a host of Microsoft applications – things like Office, Teams, and the like. Overall, this is one device I will be keeping a close eye on in 2020.

The Moto Razr is a foldable, modern version of Motorola’s mega-selling Razr phone from way back when. Like all other foldable phones, the Moto Razr is pricey (contracts start from around £94 a month). And for that, well, you’re not getting much more utility than you would from a standard mobile device.

Even the specs are kind of limited, as you can see below. The handset is designed to be ultra-portable like its predecessor. Only this time it’s packing an OLED display and Android at its core, bringing full support for Google Apps and the Google Play Store.

The Huawei Mate X is the second most-well-known foldable phone on the planet right now, next to Samsung’s Galaxy Fold. In true Huawei fashion, the Huawei Mate X packs a larger display, better spec, and, in my humble opinion, a far more attractive design than the Galaxy Fold. It also costs more too. But you do get A LOT of phone for your money.

You have a larger OLED panel than the Galaxy Ford (it’s 6.6in) and when you unfold the device completely, it switches into a rather gorgeous 8in tablet-style device. As noted earlier, for me, the Huawei Mate X is the best looking foldable phone on the planet right now. And on top of that, it also has the best specs and features.

The LG G8X ThinQ isn’t what you’d call a traditional foldable phone. It has two displays that you can run side by side, though neither display actually folds. In this respect, it is not at all like the Huawei Mate X or the Galaxy Fold. In fact, it’s pretty much unlike anything else on the market right now.

The big idea here is multitasking on two screens at the same time. You can have the camera app open, for instance, alongside Instagram. Or open up a game and use the second screen as a controller. It’s early days yet, but as a concept, the LG G8X ThinQ has a lot of potential. 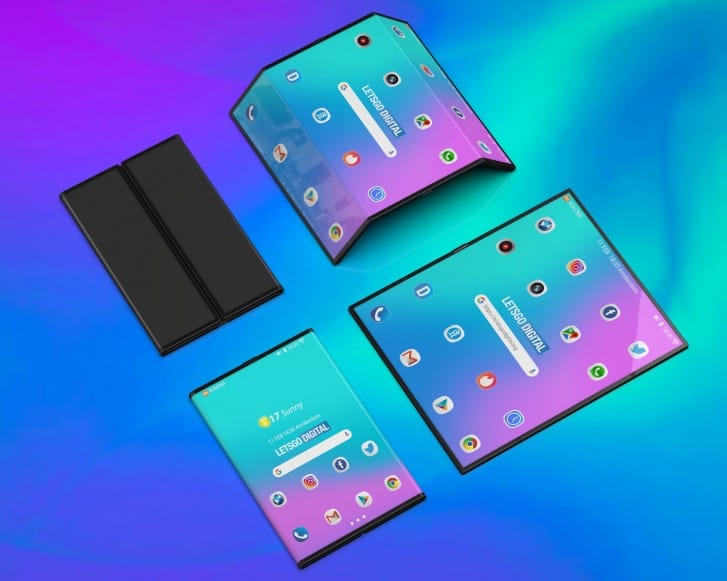 The Xiaomi Dual Flex will be Xiaomi’s attempt a true-foldable device. Not much is known about the device yet, as it’s not been made official, but Xiaomi execs have confirmed that work is now underway on the Xiaomi Dual Flex and it should be coming to market sometime in 2020.

The Xiaomi Dual Flex will feature a large 10in OLED display that folds down in two. You can run it in FULL MODE or close it in half and run as a normal cellphone. As always, Xiaomi’s foldable phone will likely retail for a lot less than the current market-leaders. Here’s a break down of the Xiaomi Dual Flex’s rumored specs: 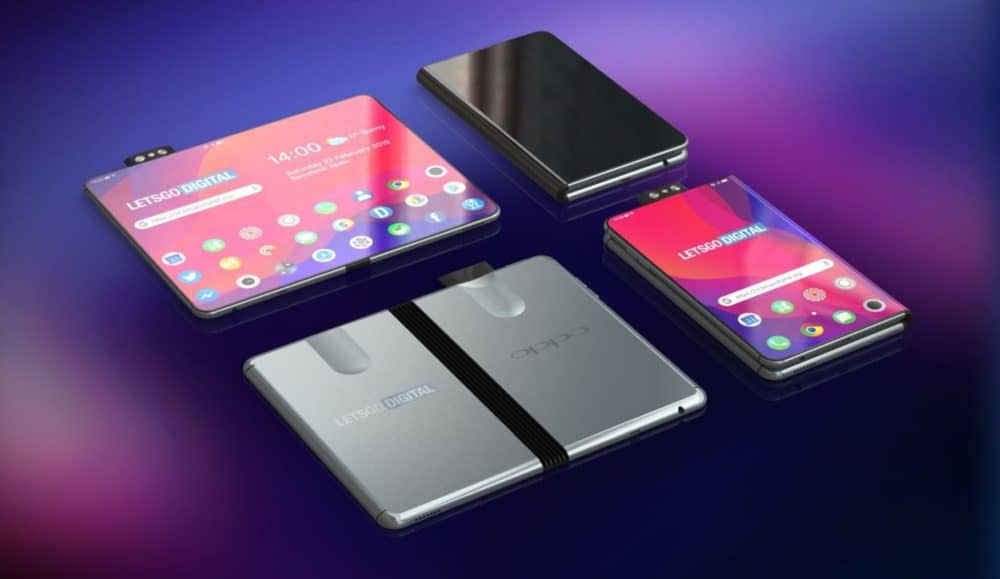 OPPO is working on a foldable phone that will debut sometime in 2020. I think it was meant to launch at MWC 2020, but that event has now been canceled on account of the Corona Virus outbreak, meaning OPPO’s foldable phone could launch at any point inside the next few months.

Not much is known about the handset just yet. But we do know, thanks to leaked patent filings, that it will feature a pop-up camera and, rather surprisingly, a 3.5mm headphone jack. Other specs include a flexible OLED display, Qualcomm’s Snapdragon CPU, and 5G connectivity.

In terms of design, the OPPO foldable phone shares more than a passing resemblance to Huawei’s Mate X handset. And that’s no bad thing; the Mate X is, perhaps, the best-looking of all the available foldable phones on the market right now.

Apple’s Plans For A Foldable iPhone – What’s The Story?

The entire foldable phone concept, while novel, has yet to become a mainstream concept. This is mostly down to the fact that current foldable phones are prohibitively expensive and also because, well, there’s only a select few options available right now.

With this in mind, and keeping Apple’s ultra-conservative approach to its iPhone development, we can assume with almost certainty that we will not see a foldable iPhone anytime soon. Sure, there are rumors about Apple releasing a foldable phone in 2021, as part of its iPhone 13 series. But this is just rumor-talk right now, and as the saying goes: talk is cheap – facts are harder to come by.

Logically, it makes no sense for Apple to introduce a foldable phone at present. The sales for current foldable phones are all but non-existent, so until foldable phones are selling as well as regular phones – phones like the Galaxy S20 and iPhone 11 – logic dictates that Apple will not be joining the party with one of its own folding devices.

Is Apple working on a foldable phone? Probably. Apple’s R&D department spends years developing new technology; it’s almost certain they have a foldable iPhone, an Apple HDTV, and a bunch of other cool stuff that, so far, has not seen the light of day in the public domain. But just because it is “working” on something DOES NOT mean it will release said something. Think about how long it took Apple to switch from small displays to larger screens?

The iPhone is Apple’s cash cow. It will not mess with the formula until it is 100% certain there is A) demand for said change, and B) that it can actually create something that not only works but also delivers value to its user-base. The entire idea of a folding iPhone is totally dependent on how well current foldable phones sell. And right now, in this context, it’s not looking good, so don’t expect to see a foldable iPhone any time soon…