The LG V60 ThinQ 5G went on sale in March and, unlike most of the top-tier 5G phones on market right now, it is considerably cheaper than what you’d normally expect from a top-flight Android phone. 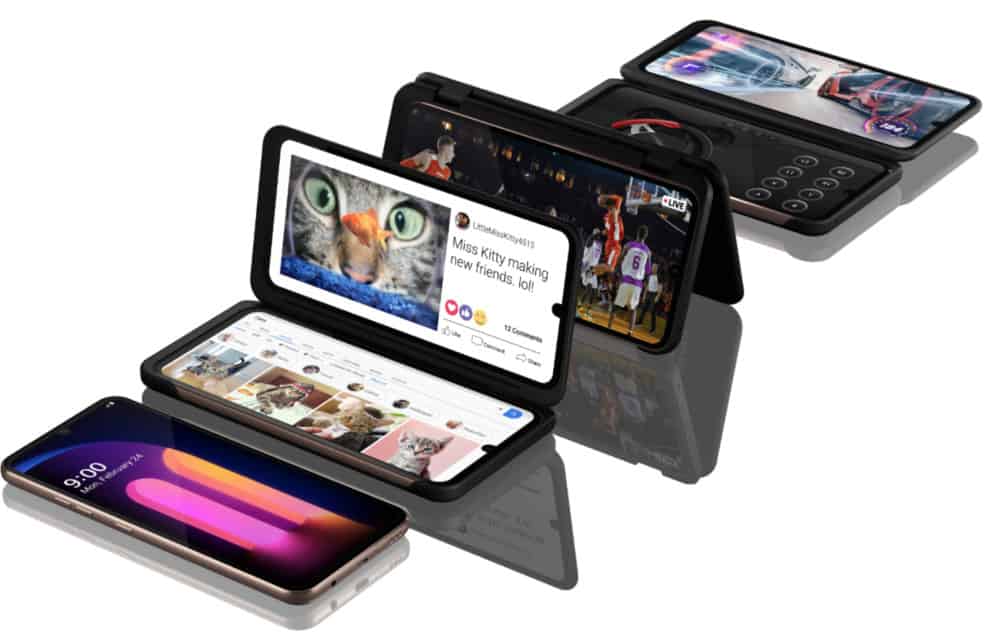 Not only that, but you can also buy a second screen for the LG V60 ThinQ and turn it into a foldable phone as well. This does hike the price up somewhat, but it is still infinitely cheaper than Samsung’s Galaxy Fold.

On the subject of specs, the key things you need to keep in mind (always) are battery life, memory, internal storage, and expandable storage – these are the #1 specs that affect usability. And the LG V60 ThinQ 5G pretty much nails all of them. You have a massive battery (5000mAh), IP68 water-resistance, 8GB of RAM, and support for MicroSD-support (up to 2TB).

For comparison’s sake, the Galaxy S20 Pro has similar specs, although it doesn’t have SD-support, and it retails for around $200-$300 more than the LG V60 ThinQ 5G. The LG V60 ThinQ 5G also wipes the floor with Apple’s similarly-priced iPhone 11. And with the LG, you’re getting support for 5G, masses of storage (128GB base model), and a larger battery (5000mAh), as well as Qualcomm’s latest Snapdragon 865 CPU.

LG has not had a good couple of years. It has lost ground and market-share to Samsung, Huawei, OPPO, and OnePlus. The company’s brand is at an all-time low and the long term does not look good for the company’s mobile business.

However, a phone company is ONLY as good as its last phone. Or, in this respect, its incoming release. The LG V60 ThinQ 5G has the potential (and price tag) to attract a lot of attention from floating voters in 2020. It’s cheaper than the Galaxy S20 Pro and it packs in better specs and hardware than the iPhone 11.

You get 5G, without the premium price tag, and it looks stunning – if current leaks are anything to go by. For this reason, the LG V60 ThinQ 5G is definitely worth adding to your potential upgrade list. The only thing I’d be slightly wary of is LG’s track-record with Android updates (it’s not great, to be frank).

Having said that neither is Samsung’s – or Huawei’s, for that matter. I don’t think this is a deal-breaker for many buyers, although it is definitely worth keeping in mind if you do decide to go with this phone. Another thing to understand is that you can get around this by learning how to install custom ROMs on your Android phone – we tend to use Lineage OS for this as it is one of the most stable on the market.

The LG V60 ThinQ 5G is positioned to compete on price. But when it comes to price, you have a lot of additional options too – from OPPO to OnePlus and even Xiaomi. If you’re thinking about upgrading in late-2020 but are waiting for more options, you will almost certainly be aware of the prospect of the incoming OnePlus 8 range.

The OnePlus 8 – and OnePlus 8 Pro – could well be priced very similarly to what LG is charging for its LG V60 ThinQ 5G. The main difference between these two phones, with respect to performance, is harder to comment on right now as I have not used either. Generally speaking, though, OnePlus does tend to have better software than LG. It also has a better track-record with respect to getting Android updates out to its phone.

Still, this is the first time in a long time that an LG phone has piqued my interest. I’ll be keeping a close eye on the LG V60 ThinQ 5G between now and its launch – and I think you should too!