iPhone 8 Plus vs OnePlus 5 – How Do They Compare?

The iPhone 8 Plus is Apple’s last phablet flagship still on sale that has big bezels. Though the iPhone 8 Plus is two years old, it’s still a good choice for some. It also competes against a ton of other older Android phablets–the least of not which is the still-popular OnePlus 5.

Please Note: both of these phones are now rather old; the iPhone 11 is Apple’s latest model, while OnePlus is now KILLING it with its OnePlus 7T range that is currently topping our #1 Android Phone Guide.

From a cursory look of things, the two phones are very similar: they both have 5.5in displays with the same resolution and big, honking “forehead” and “chin” bezels. But there are several differences between the devices. So let’s take a look to find out how each compares.

OnePlus 5 vs iPhone 8 Plus Quick Comparison 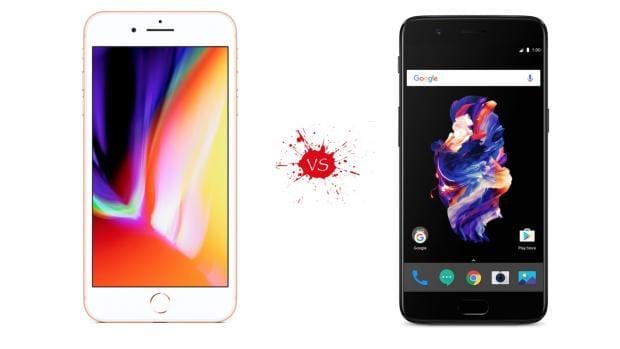 Winner? OnePlus 5 – Both phones are relatively sleek with a solid build, but the OnePlus 5 comes in both thinner and 25% lighter than the iPhone 8 Plus.

Winner? iPhone 8 Plus – The A11 is over twice as fast as the Qualcomm Snapdragon 835.

Winner? OnePlus 5 – OnePlus really wanted to pack the best cameras into their device that they could, and users will see the difference.

Winner? Draw – Both phones will get you about the same amount of battery life.

At up to almost £300 cheaper than the iPhone 8 Plus, it’s INSANELY hard not to see just how great of a deal the OnePlus 5 is.

The price is ridiculous considering the screens are nearly identical, it has two to almost three times the RAM (depending on model) and offers much higher megapixel lenses in its dual-lens setup. I mean, if you’re an iPhone fan, there’s only one phone to get here. But if you’re not married to Android or iOS, at the price it’s being offered for, the OnePlus 5 is hard to say no to.

Another option worth considering, however, is picking up a newer – something like the iPhone X or iPhone XS, which you can get for 40% less than retail via Gazelle, our #1 pick for refurbished iPhones, iPads, MacBooks, and iMacs.

OnePlus 5 vs iPhone 8 Plus: Specs

Here are the specs for the OnePlus 5:

And here are the specs for the iPhone 8 Plus: