Are Foldable Phones Actually Worth It? Not Until 2022…

New form factors are always interesting. But are foldable phones REALLY worth the money in 2020? Or are you better off with something more traditional?

If you want a foldable phone in 2020, you have a select few options right now (more on this below). More will launch in 2020/21. Perhaps even one from Apple. But there will be one common denominator: price – you will have to part with an ungodly amount of money to purchase one.

Even on contract, you’re looking at almost three figures a month.

What’s The Point of Foldable Phones?

Now, if you’re anything like me, you’re probably wondering why the hell do I need a foldable phone? Well, the short answer to that question is simple enough: you don’t – no one needs a foldable phone.

On top of this, I’d argue that 99.9% of people should avoid all current foldable phones too.

Why? Because first-generation devices – especially when you’re dealing with new, largely untested form factors – never quite work as well as they should. The iPad 2 was better than the original iPad, for instance, and the reason for this is simple: all the performance/design issues are worked out after the first model has been on market for a while.

Companies like Apple and Samsung can test and test and test prior to release, but it isn’t until the device is in the hands of consumers that they start to get back actionable data on ways to improve the design and functionality of the device.

The Pitfalls of Being An Early Adopter

The smart move is to wait for the second-generation device. And if you’re a Samsung fan, you won’t have to wait that long – the Galaxy Fold 2 is rumored to launch later this year.

And you know the Galaxy Fold 2 will be 10x better than the original Galaxy Fold because Samsung will actually have some data and feedback to work with – it’ll know what worked and what didn’t. It will also know where all the current weak areas are in the design language of the phone. And it can ONLY get this type of data once a phone has been out in the wild and actually used by consumers.

And this, ladies and gentlemen, is where early adopters come in…

What are early adopters? An early adopter is someone that has to have the latest and greatest technology. They don’t care how much it costs or whether it works properly. They just have to have it. And while they’re a small niche of consumers, they are out there, and they do buy stuff like foldable phones before anyone else.

How do I know?

I used to be one! At least, I was until I decided to stop wasting my money on first-gen concept devices that sounded amazing but ALWAYS failed to work correctly. I got the first iPad (it was super-heavy and not that great), the first Apple Watch (the battery sucked), and the first Windows RT tablet (it was just awful through-and-through).

If I’d waited like a normal person, I could have saved myself a packet in the process and got a better product as a result. If I’ve learned anything in my 10+ years as a tech blogger it is this: FIRST GEN PRODUCTS ALWAYS SUCK. They’re basically prototypes designed purely to make some money and harvest some user data. Apple and Samsung, for instance, know that the real product is always the second and third iteration.

And this is why 99.9% of people should avoid foldable phones like the plague right now. Wait until 2021 or 2022. By then, Huawei, Samsung, and probably Apple too, as well as Xiaomi and OPPO will have nailed the concept, refined it properly, and made foldable phones as functional and reliable as traditional, non-folding smartphones.

And foldable phones will hopefully be cheaper by then too.

Why Hasn’t Apple Made A Foldable iPhone Yet?

Apple does not follow trends blindly. Instead, it waits and bides its time. It has ALWAYS done this – with 5G, with 4G, with larger displays, with more RAM. Apple always errs on the side of caution. And this is why it hasn’t jumped on the bandwagon and released a foldable iPhone.

“Smartphone consumers have gotten into the habit of upgrading their phone every couple of years, so they pretty much know what to expect,” says Laura Wronski, senior research scientist, at SurveyMonkey, and the person who ran the study. “Their new phone will be a bigger, better, faster version of their old phone. They aren’t looking for their phone to suddenly turn into a virtual reality device or to have all these extra bells and whistles. They want an improvement on what they have.”

Apple knows this form factor is completely untested. In fact, no one really knows if there is even any demand for these types of phones. I mean, they cost $2000 a pop and don’t really do anything different to standard phones, save for fold in two. Will a large majority of consumers pay DOUBLE the price of a smartphone for that? I don’t know (but I wouldn’t bet my house on it). 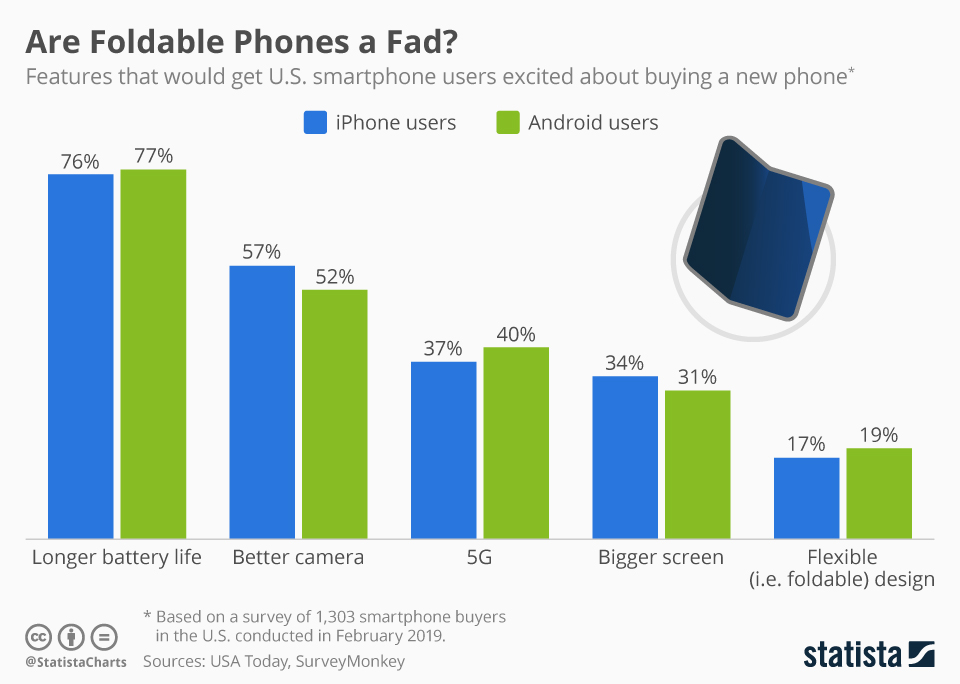 You will find more infographics at Statista

Like a savvy consumer, Apple will bide its time and see how this niche pans out. If consumers begin lapping up foldable devices and developers create new and engaging experiences for them, we’ll probably see a foldable iPhone in the not too distant future (2022 at the earliest). But that’s ONLY if foldable phones take off.

Just because something looks cool doesn’t mean it will be successful – just look at Google Glass.

And make no mistake: foldable phones, with their $2000 price tags, are NOT an easy sell. Think about it: how can you ask a consumer to pay DOUBLE the price of a flagship phone when all this new phone can do is fold up? How is that adding value? How is that worth 2X the price of a Galaxy S20? Spoiler alert: it isn’t – and that’s what brands like Samsung and Huawei need to figure out fast.

Without lower prices, I can’t see foldable phones causing standard-style phones too much trouble in the coming years. I love new tech innovation as much as the next guy, but for me, any significant change to the design of a phone has to add value – it has to make a difference. And right now, I just don’t see how foldable phones make much of a difference. I mean, it folds up, right? That’s great. But why does that mean it has to cost $1000 more than an iPhone 11?