Digital Detox: Surviving Without A Smartphone

What’s it like to ditch your iPhone for a week?

Smartphones have become a ubiquitous part of everyday life for millions of people all over the world. We use them to find directions, browse the web, watch movies, play games, reply to emails and — yes — even make long-distance calls and send text messages. If there’s one device most people would admit they can’t live without, it’s likely to be their smartphone. No other piece of modern technology demands so much of our daily attention. 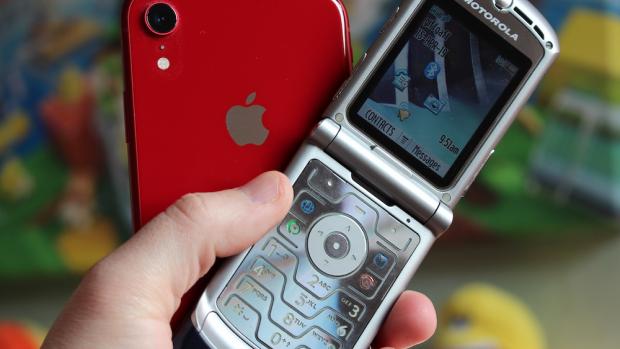 However, smartphones can be overwhelming; a negative effect on our mental well being that is constantly at our side, eternally demanding our full and undivided attention. Social media, email, news, addictive games… just as phones can be a liberating force in modern society putting us in touch with millions of people, they can oppress their owners, enslaving them in a constant, unbreakable cycle of fixed attention — while the real world passes in front of our occupied eyes almost unnoticed.

As someone who has been using a smartphone since 2008 but can remember the days of ‘dumb’ phones, I feel especially impacted by their inexorable rise. On one hand, I love the fact that my phone effectively does everything a modern computer does, and more. I can take amazing photos, play console-quality games, connect and collaborate with my workmates and watch funny cat videos when I’m on public transport. Whenever I have a spare moment, I’m glued to the screen; whether it’s answering tweets, catching up on the news or simply trying to better my high score on Doodle Jump (yes, I still play it in 2019), I gravitate towards my phone almost instinctively; the moment I can sense some downtime coming, my hand is already making its way to my pocket to retrieve my iPhone. It’s not something I’m proud of. 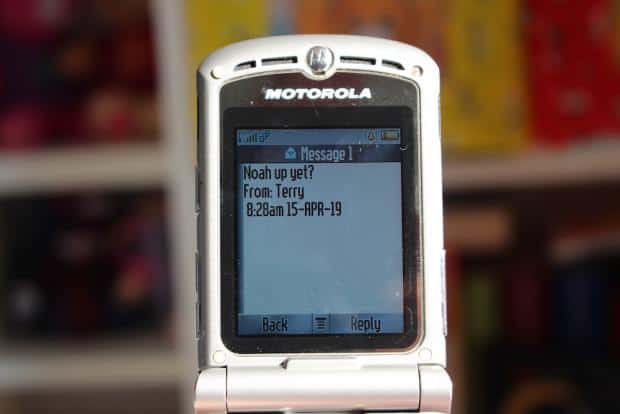 It’s little wonder then that many smartphone users are embracing what has become known as the ‘digital detox’ — a short-term solution to the addictive nature of smartphones. Using an old ‘feature phone’ or buying one of a growing number of new devices that intentionally limit functionality, the detox involves disconnecting yourself as much as possible; cutting yourself adrift in a world where people are accustomed to being plugged into Twitter, Facebook, Instagram and many other platforms 24/7.

As a parent and husband, I’ve often felt the need to detox digitally. I’m ashamed to admit that I often find myself staring blankly at my phone when I’m down the park with my kids, ignoring their cries for attention because I’m busy catching a Snorlax in Pokemon GO or too I’m deeply involved in a topical debate on Twitter. I can feel how my smartphone is robbing me of real-world experiences; that tempting screen offers a wealth of entertainment and distractions, but the cost is I’m missing out on actual things happening right in front of me. And — judging from the number of parents I see down the park doing the exact same whenever I do decide to lift my gaze from my handset — I’m not alone here. The world is addicted to smartphones in the most terrifying way; there are times when I feel like I’ve stepped into a twisted sci-fi movie from the ‘70s where people are totally beholden to these tiny computers in their hands.

I didn’t enter my detox willingly. I actually began this experiment in a rather roundabout way. I spotted a second-hand Motorola Razr V3 in my local CEX for £20 and couldn’t resist buying it; this was a phone I’d gazed longingly at in 2004, an unobtainable object that seemed like a glimpse of the future. In 2019, it’s a relic that is capable of only the most basic telephone functions. There’s no 3G, the web browser won’t load anything beyond Google’s home page and there’s not a single social media app to be found in its tiny 5MB memory. Although I purchased the V3 mainly as a cool object to have on my desk, it pushed me into my detox; here was the perfect device to use during this period, because while it’s most certainly a ‘dumb’ phone, it still looks cool as hell. 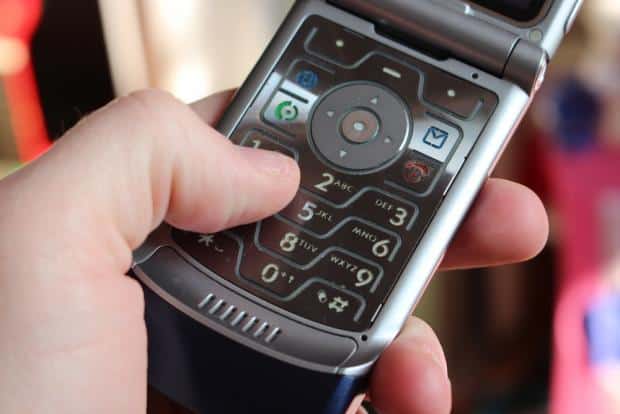 Slotting my Nano SIM into the V3 (with the use of a SIM caddy — remember when SIMs were massive?), the first thing that hit me was how little there was to actually do. No apps, only two crappy Java games, a handful of tools (including a calculator!) and that’s about it. Smartphones are amazing time sinks; if you want to procrastinate, then your smartphone is the place to be. On a dumbphone, you’re limited massively — and in 2019, that feels strange. I realised that the phone had been reduced to its barest form — a tool for calling people and sending text messages via (gasp!) T9 predictive text.

The end result is that the V3 remained in my pocket for almost all of the day, outside of the occasional need to check the time, take a (terrible) photo or send a text message to my worried family and friends who wanted to know why I wasn’t responding to WhatsApp messages (yeah, you can’t get that on it, either). My phone had become a phone again, and as a result, I was forced to pay attention to what was happening around me. And battery life? Forget about it. On a full charge my V3 – which is 15 years old – lasted for an entire week, even on a battery which has probably been charged hundreds of times over.

I take a lot of photos with my iPhone. I don’t own a point-and-shoot camera anymore, because my smartphone has adopted that role; they say the best camera is the one you always have with you, and that’s certainly the case for myself and millions of others. This was perhaps the element I missed the most when using the V3; while it has a camera, it’s very much a ‘first-gen’ effort. We’re talking VGA resolution (that’s 0.3 megapixels, fact fans) and abysmal quality. These images were intended for distribution via MMS messaging, not for blowing up on your computer screen or printing on a canvas. Without my trusty iPhone, I felt that during my detox I lost the chance to take some memorable snaps — but the upside is that I actually appreciated the moments for what they were, rather than worrying about pulling out my phone and getting the perfect bokeh-enhanced image. It was a curiously liberating experience. 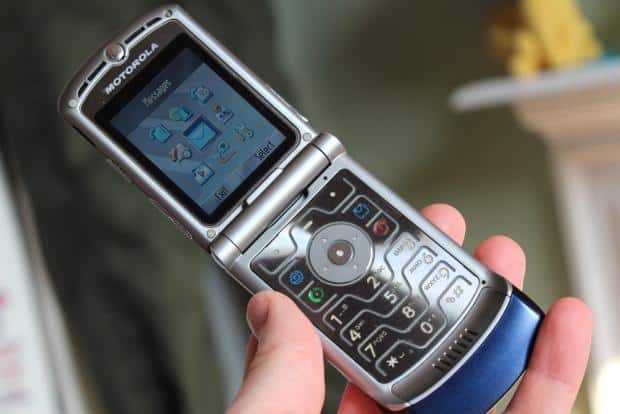 Without email, social media or the web in general on my fingertips, I had to rely on my home computer to reconnect with these services — and to be honest, it wasn’t the end of the world. So what if an email doesn’t get answered for a few hours? In fact, the act of sitting in front of the computer and knowing that I had a large helping of posts, emails and news to digest was exciting; the only time I felt like I was really missing out was when work-related messages came through on Slack (a business-focused messaging tool); these often need replying to instantly, and without my smartphone, I was effectively locked out of the conversation. However, I was actually surprised at how little I missed platforms like Twitter and Instagram; it proves to me that these are simply ways of wasting time throughout the day, rather than essential applications that improve or enhance your life. If anything, they’re worryingly oppressive and the need to constantly check them is something I didn’t miss in the slightest.

Despite all of this, I’m willing to admit that I was glad to be back on the iPhone. There were perhaps too many moments during my detox where I reached for my handset before realising what I intended to do — be it check a route to a certain location, listen to a song or find out the age of a certain actor, musician or political figure (something I do more than you might imagine) — wasn’t possible on the V3, and I’m not sure I could have lived with that for much longer. Yes, we are slaves to our phones, but they give us a lot back in return.

So would I recommend a digital detox to anyone else? Certainly. I realised how much I’m looking at my phone on a daily basis, and consequently how much I’m missing as a result. I realised that all that time spent looking at a screen doesn’t actually enrich my life that much; it’s a profound waste of time, to be quite honest. I also came to understand how boring modern phones have become from a design perspective, but that was more to do with the fact that that handset I picked for my detox was one of the most iconic designs in the history of mobile phones; why can’t handsets look as amazing as the V3 today? Hopefully, Motorola’s Razr revival will look half this good.

Ultimately, I’ve come away from this experience with what feels like a newfound knowledge; I can see how much of a benefit a smartphone is when it comes to work, keeping in touch and finding your way around the world, but I also feel slightly nostalgic for the time before smartphones, when we simply used our handsets to call and text people and ‘social media’ was a buzzword yet to be created.