Could You Still Use iPhone 3GS in 2020? Let’s Investigate…

The iPhone 3GS is now ANCIENT, and by ancient, I mean it is 11 years old – and that is basically medieval in the phone world. But could you technically still use it in 2020 if the circumstances arose?

As phones go, they don’t get much more seminal than Apple’s iPhone 3GS in the history of cellphones. It’s basically the phone that started the entire industry we now know and love, popularising apps, app stores, touchscreen keyboards, and mobile games. Sure, some of these things existed before. But the majority of people had no clue about them until Apple’s iPhone 3GS came along.

It’s now 11 years since Apple first released its iPhone 3GS; it came out on June 24, 2009, and was manufactured right up until September 12, 2012. Since then, things have moved on dramatically. Apple’s iPhones are now bigger than ever and even Apple’s release strategy has changed; we now have three new iPhones per cycle, where it used to be just one. But perhaps the craziest thing about the iPhone 3GS, from the vantage point of 2020, is how much they still cost to buy. I just did a quick Google search and found iPhone 3GS models on sale from prices ranging from £229 to, wait for it… £2599! This is on eBay, however, so crazy pricing is to be expected. Still, though, £2.5K for an 11-year-old iPhone is a bit much. Even if it is brand new, as the seller claims!

Even Networks Aren’t Immune To The Power of Nostalgia…

Nostalgia is a big marketing trick. Hollywood has been using nostalgia to make billions in bank for decades. And phone networks aren’t immune to using it as a sale ploy either. Case in point: back in 2018, a Korean network – SK Telink – started selling iPhone 3GS handsets again, 10 years after the phone originally came out, for $40 a pop. And it came with all the original accessories as well.

How did it manage to get new iPhone 3GS models, when Apple hasn’t made any since 2012? Simple: it had a load laying around in its warehouse, so rather than selling them on eBay, it tapped the nostalgia vein of the masses and began selling off the old stock at a discounted rate. SK Telink tested all the dusty, old units too. And apparently they all worked just fine. Either way, it’s better than paying £2559 for one via eBay!

Yes, of course, you could. So long as you had a battery that had power left in it, the iPhone 3GS would turn on and work. However, actually running the phone might be more problematic on account of its minuscule CPU and memory. I mean, just look at this spec sheet:

The biggest issues would be the small amount of RAM (256MB) and the 620 MHz CPU. Any modern application would cripple that kind of spec; even modest ultra-budget phones that are pitched as “feature phones” run double or triple the processing grunt of the original iPhone 3GS, so while it might have been snappy in 2009, that definitely wouldn’t be the case now.

And that’s before you even consider that Apple’s entire iOS platform has now shifted to 64-bit which creates even more problems for the iPhone 3GS (and the iPhone 4, iPhone 4s, and iPhone 5) because all of the apps inside Apple’s App Store are now designed to run on 64-bit chips (or iOS 8 and higher). Not having these things in place will cause plenty of performance issues with your apps – things like hangs, crashes, and other glitches.

So not only are you stuck on an outdated version of iOS, the iPhone 3GS’ sluggish CPU will seriously struggle to run even the most basic of apps. Remember, it’s only using a 620MHz CPU and most of the apps that you use on your phone have evolved a lot in the past 10 years, developing alongside the latest SoCs inside Apple and Android phones.

Asking a 10-year old iPhone to run something like Lightroom is a bit like asking your 5-year old what they think about the proliferation of nuclear weapons in the middle east You might get something, but it wouldn’t be anything useful. And that’s exactly what would happen if you tried to run any sort of modern iPhone app on the iPhone 3GS. It’d splutter, lag, and then eventually fail. 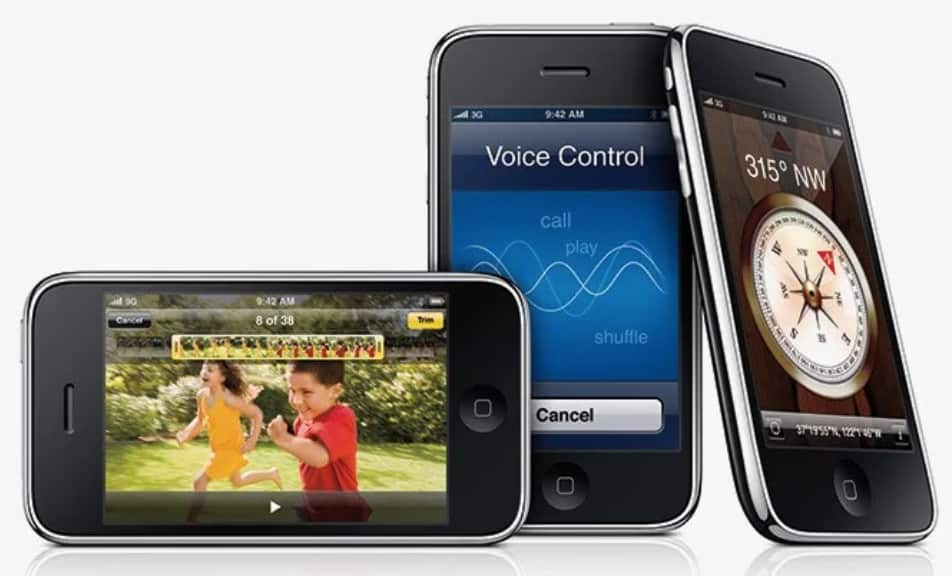 Even if you jailbroke the iPhone 3GS, solving the redundant software issue, you’re still left with the utterly low-fi internal spec. And it is this spec that will make using the phone for anything beyond calls and texts an absolute nightmare. Hell, even then it might be a bit of a slog…

Moral of the story? Old iPhones are still iPhones. And people will pay massive amounts of money for them. But you shouldn’t; it’d be a waste of money even though it’d score you some pretty big nostalgia points. My advice, if you want to save money on your next iPhone, is to make sure you buy one that isn’t so old that even Apple has written it off. And there are a number of not-so-well-known ways of doing this.

Me personally? I’d pick up an iPhone X right now if I were in the market for a good deal on a solid OLED iPhone. Thanks to the release of the iPhone 11, you can now snag Apple’s 2017 flagship for around $400! And that’s for the 128GB model too. Not too shabby, right? And remember: the iPhone X has an OLED display and the iPhone 11 does not.

Designing An Icon: How Apple’s iPhone 3GS Came To Be…

Whenever you think about the iPhone 3GS, you have to do it with the right context in mind. Right now, the iPhone 3GS looks ancient and dated. But back in 2011, it was something of a trailblazer – from the way it looked to the technology it ran inside it. Android was around then too. But it was Apple that was winning the hearts and minds of the masses with its focus on simplicity and ease of use.

The first iPhone was not successful, in any meaningful way, but that phone was more a proof of concept than anything else. The iPhone 3G did a lot better, both with respect to sales and how it looked and functioned. Apple had got the design right, so when it came to the iPhone 3GS is was all about refining the experience, making it faster and more responsive.

This is what the iPhone 3GS was all about – speed. It had a faster CPU, more memory, a better camera, and it connected to faster mobile data (HSPA). Remember: this was well before the release of 4G. Combined, these elements created a near-perfect phone the time. The iPhone 3GS more than any other iPhone release is the one that is most responsible for “selling” Apple’s vision of how cellphones should work to the mass market.

How did we get to the iPhone though? What market forces occurred that lead to the concept of an iPhone even being considered? Most sources tend to agree that Apple, worried about declining iPod sales as more and more cellphone manufacturers began adding music players to there phones, began to envision its own cellphone, one that would bring together the iPod, iTunes, and applications and games inside a dedicated cellphone package.

During this period, the mobile space was fairly unorganized. There were major players, Nokia and BlackBerry, but neither company had much of a vision for where to take their respective platforms. Google’s Android platform was a different story, however, because, like Apple, Google saw Android as the platform of the future. It proceeded to then set about making it happen, tying Android to its popular Gmail and its supporting suite of applications.

Android and iOS, as concepts, are remarkably similar. Where things get different is how Google and Apple planned to disseminate the software; Apple made iOS totally proprietary, whereas Google took a more open-source approach with Android, allowing third-party OEMs to use it on their phones.

In the end, Android won the most market share. By a considerable margin. But it is Apple that makes the most money, even when it sells fewer phones. And the reason? Control. Apple built iOS with complete control in mind; every transaction that takes place in iOS sends cash straight back into Apple’s coffers, giving it a major advantage of every other phone maker in operation today. 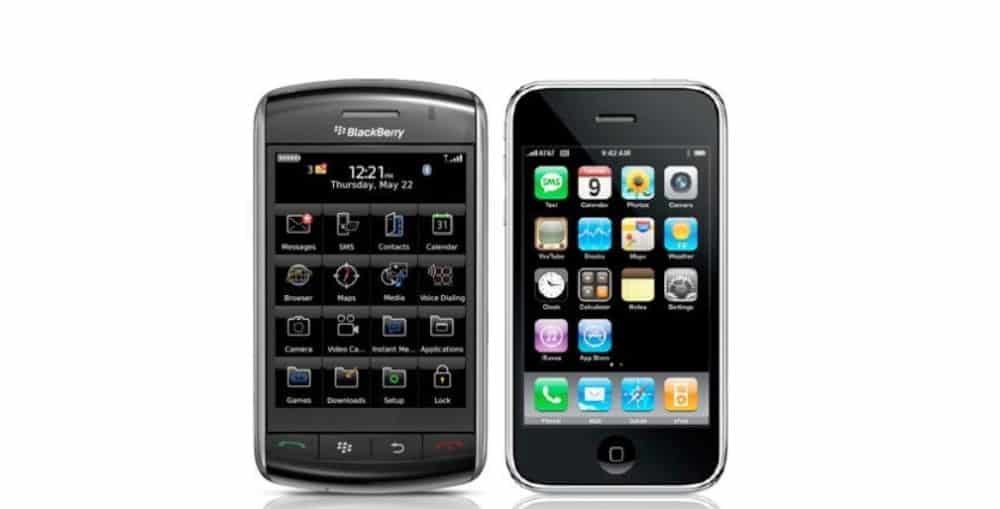 The forward-looking vision of Apple and Google, of making platforms that would unify many different features and abilities, all under one roof, was what set it apart from BlackBerry and Symbian. This is why Android and iOS took over; they completely reinvented the phone from the ground up, while brands like BlackBerry were still focussed on niche-pursuits that had no place in the future of how mobiles would go on to be used and perceived.

By pulling together applications under one roof inside the App Store, and selling millions of phones, Apple effectively created a new developer platform. And where there are developers, there is innovation. This is why we have Instagram and Snapchat, and things like CityMapper and Strava. Because of iPhone and, to an extent, Android. If BlackBerry and Nokia were still in charge, things would look very different today – and not in a good way.

The iPhone 3GS is an important phone because it was effectively Apple’s springboard into the mainstream. Millions of people bought and loved the iPhone 3GS. And a huge majority of those people, around 80%, then went out and bought the iPhone 4 when that phone landed. As Apple released more phones, its tribe of users grew. It augmented and changed the iPhone but always kept its core principles in place which attracted new users and ensured its current ones always came back.

Bottom line? It wasn’t specs and hardware that made the iPhone so popular, nor was it fancy marketing. In the end, Apple created a platform that millions of people wanted before they even knew they needed it, and whenever I think about the iPhone, I cannot help but think of that famous quote by Wayne Gretzky – “I skate to where the puck is going to be, not to where it has been.”

And if you’re looking to get an iPhone, do not do anything until you’ve checked our iPhone deals generator tool – it pulls in thousands of offers from the UK’s biggest phone networks.