I love Android phones as much as the next man, but recently things have gotten a little silly in Android land. Not so long ago, it was Apple’s iPhone that was the prohibitively expensive option, the phone that all your posh friends used. In 2020, this is no longer the case. In fact, I would argue that Apple’s iPhone 11 range now serves up way more value for money than nearly all of the current Android phones you can buy for similar money.

Why? If you buy an iPhone today, say, the iPhone 11 Pro Max, it will cost you a pretty penny whichever way you decide to finance it. But once you have taken the hit, you will then be able to run that phone, with full software support, for at least six years – that’s more than 3X longer than ANY Android phone on the market. Get yourself a , say the iPhone XS, or even the iPhone 8 Plus, and you will still get more or less the same software support from Apple.

And herein lies one of the secrets to Apple’s success with iPhone: support and reliability.

Say what you want about Apple as a company, but one thing it does extraordinarily well is software updates and support for its iPhone and iPad devices. For instance, within a week of iOS 13 dropping over 80% of ALL iPhones in circulation were running it.

Apple users – those that have been in the ecosystem for years – know that when they buy a new iPhone, they will be using it for years to come until they either A) fancy a change or an upgrade, or B) the battery inside the phone degrades to such an extent as to make the phone unusable. And then, once their current iPhone has run its course, the vast majority of these users will go out and buy another iPhone.

This is known as brand loyalty and no other phone maker – or tech company – commands such high brand loyalty from its users. I know people, the vast majority of my friends, actually, that would not even consider using an Android phone; it just seems too alien to them after using iPhones for the past 10 years. Me? I’m platform agnostic, for the most part; I use Android phones predominantly which is why, over the past several years, I have become increasingly frustrated with how things work inside the Android ecosystem.

I’d love to run a phone like the Galaxy S20 Ultra, or the incoming Galaxy Note 20, but I just cannot stomach the price – not when I KNOW I’ll only get two years of updates if I’m lucky. You cannot charge more money than Apple for a phone that isn’t as fast, doesn’t get the same level of support, and will, for all intents and purposes, be left out in the cold two years after its release. I know, I know – you can install a custom ROM. Great! Maybe I don’t want to do that? Maybe I want the company that I bought the phone off in the first place to do a little better?

I don’t think that’s too much to ask…

Android: Easy To Like, Hard To Love (In The Long Term)

This is my number one problem with Android – with all Android phones, even ones made by Google. You just don’t get the same level of software support as you do with an iPhone. You’d think Google, being the creator, owner, and distributor of Android would have solved this with its own Pixel hardware. But, again, even with a Pixel you’re looking at three years MAX when it comes to software support.

With phones like the Pixel 3a, which retails for $399, that’s more than respectable. The price is fair, the phone is great, and for that much money, I could live with only getting two years’ worth of Android updates. The price is low enough, in the context of the Pixel 3a, that you still feel like you’re getting value for money. With a phone like the Galaxy S20, an infinitely more impressive handset, this just isn’t the case – it’s three times more expensive than the Pixel 3a and it will get fewer Android updates. How does that work?

Why Control is a Good Thing (When You’re Making Phones)

Apple’s history in the mobile space, as well as its rise in the PC market, is defined by one thing: control – a complete and unflinching lust for absolute control over everything it makes and produces. All aspects of any Apple product come under the direct control of Apple and, for the most part, will only work functionally inside Apple’s ecosystem.

Whether you’re talking about iPhone, MacBooks, Apple Watch, or AirPods, Apple’s tight control is at play from the ground-up. This approach is heresy to many technology users which is why some people have a long-standing cultural hatred of Apple and everything that it stands for. But for every hater, Apple has 100 advocates. And this is the key to its success.

Apple, for its sins, has managed to convince tens of millions of people to buy into this vision about how its products should work. The upshot of this is that Apple’s products, when used as Apple deems appropriate, work more or less seamlessly together. And this “seamlessness” will only increase now that Apple is moving its Macs over to its own, custom Apple Silicon.

Going back to iPhone, the reason Apple is able to provide such robust, focussed support with software updates is that it has complete control over every aspect of the iPhone – from how apps work to the phone’s internal GPU and modems. Everything is designed and implemented by Apple to function in a specific manner. 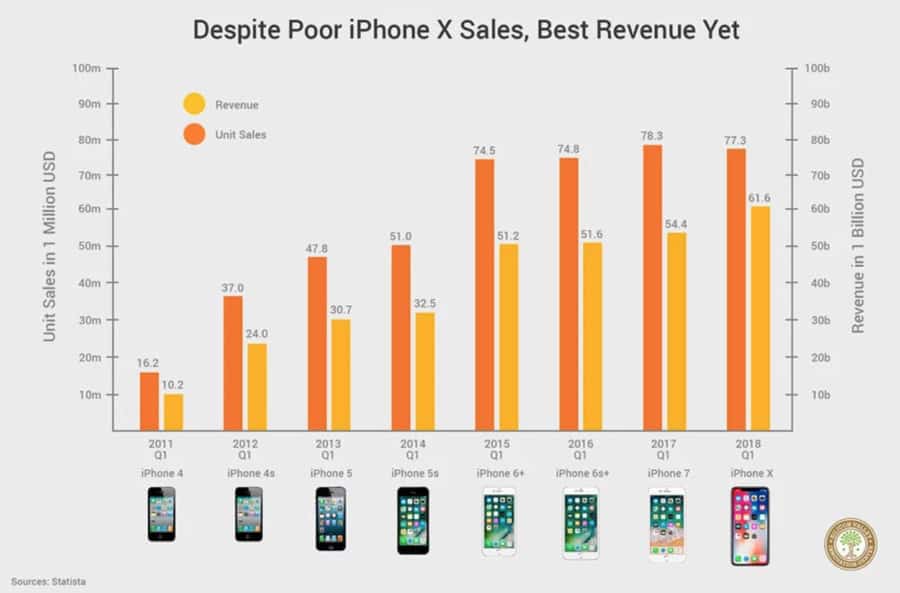 The iPhone is built from the ground up by Apple to run on iOS and use Apple software like the App Store. Apple controls the developer tools for iOS and it ensures that it is ALWAYS first to make money when any transaction is made inside its platform. Samsung, LG, or any other Android phone maker cannot complete with this model for the simple reason that they lack control at a source code level. With Android, Google calls the shots.

And because all roads lead to Google inside Android, its OEM partners – like Samsung – are reliant on making profits from selling hardware (phones). This is why we have a near-constant stream of new phones with new features; Samsung has to sell millions of phones to make money, whereas Apple can sell far fewer and still make more money because it controls both the software and the hardware.

For this reason, it’s not in Samsung’s best interest to provide robust support for its older phones. It wants (nay, NEEDS) users buying new phones. Ideally, every 12 months. If that happens, it can remain profitable and grow. If this churn effect stops, and people start holding onto their Samsung phones for five to six years at a time, Samsung’s profits would take a hammering. And this rule applies to ALL Android phone makers; they’re reliant on hardware sales to stay in business.

It is this philosophical difference in how Apple and Google's Android partners do business that has caused Android's ever-present fragmentation problem. Click to Tweet

And because of the nature of how Android works (Google owns it and makes all the money generated by it), it isn’t likely things will ever change. This is why Huawei and Samsung have both flirted with the idea of building their own, custom operating systems.

All things being equal, I think most users – like, 90% of phone users – are most interested in having a phone that will work optimally for prolonged periods of time, get consistent software updates, and doesn’t cost too much money to buy.

A nice design, decent camera performance, and a decent amount of storage are also important.

This is why the Pixel 3a was Google’s most popular phone release ever; it is why the iPhone XR and iPhone 11 outsold their more expensive siblings, and it is also why NO ONE is buying foldable phones (they’re just stupidly expensive). Get the basics right – easy-to-use software, a decent selection of apps, good support, great battery life – and most users will be happy.

With Android, it’s all about the specs and features. And that’s great; I love testing and using new features and running phones with the latest specifications. However, I’d much rather Android phone makers figure out a way to sort out their totally inadequate software support. I want to be able to buy an Android phone today and still be getting Android updates in 4-5 years’ time – even more so if I’m paying $1000+ for the phone.

This is the biggest problem with Android right now and hiding behind the claim that users can flash custom ROMs onto their phones does not cut the mustard – not for the vast majority of people. If you spend $1000 on something there is an ethical requirement for it to work properly for years to come. That’s something everybody can agree on. Think about all things you’ve bought for more than $1000? Would you have bought them in the first place if you knew they’d only be supported by the manufacturer for two years?

And this is why come September or October, I will be buying my first iPhone ever – most likely the iPhone 12 Pro. I’m sick of being suckered into buying a flashy new Android phone, spending a ton of money on it, and then constantly fretting about whether my phone will get the latest version of Android. I’ve spent almost 8 years doing this, ignoring the core, user-focused benefits of iPhone, and quite frankly I’ve had enough – $1000 Android phones can go to hell.

If I’m going to spend $1000 on a phone, I want to be using that phone four to five years down the line. Not only that, but I want that phone to be functional too! And right now, if that’s want you want, the only game in town is Apple’s iPhone. And as much it pains me to say this as a long-time Android user, there’s simply no way of getting around the fact that ALL of Google’s Android partners totally suck at software support which, annoyingly, is the #1 factor in keeping phones protected and safe, as well as functional in the short, medium, and long term.