Sega’s Mega Drive Is Getting A ‘Mini’ Release This Year

Joins the SNES and PlayStation Classic 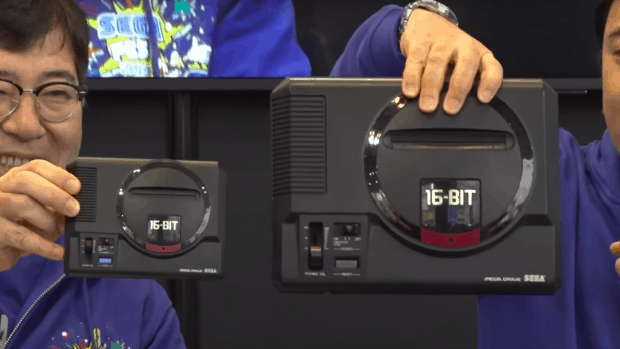 Gamers in the early ’90s will have been part of two factions: Sega or Nintendo. These two Japanese powerhouses fought it out with their 8 and 16-bit systems, dominating living rooms all over the world. While the pair are now allies and even work together on publishing games, that competitive spirit will have a chance to reawaken this year thanks to the launch of new Sega hardware.

The company is following the lead of Nintendo and Sony by releasing its much-delayed Mega Drive Mini micro-console. Like the NES Classic, SNES Classic, PlayStation Classic and Neo Geo Mini, it is a pint-sized version of the original machine that connects to your TV via HDMI and comes pre-loaded with 40 games. Sadly, you can’t use your original cartridges with it, but the controllers – which connect via USB – are an exact copy of the ones that launched with the machine way back in 1989.

Sega announced the console last year, but then said it was holding it back to ensure it would be as good as possible. It is thought that this delay may have something to do with the backlash against the news that AtGames – a company that has produced Sega clone hardware for the past decade – would be working on the system. Sega hasn’t issued any statement on this one way or another, but we’d imagine that AtGames is still making the hardware, as Sega itself no longer has the capacity to produce home systems.

The good news here is that Sega has drafted in Japanese emulation experts M2 to produce the Mega Drive Mini’s firmware, and to oversee the conversion of the 40 games. M2 helped Nintendo create its Virtual Console service on Wii, Wii U and 3DS, and has more recently been involved with the Sega Ages line of classic titles on Nintendo Switch. The company is committed to totally accurate and faithful emulation, so the fact that it is involved bodes very well indeed.

Sega has confirmed 10 of the 40 games that will ship on the finished product on September 19th, 2019. They are Altered Beast, Castlevania: Bloodlines, Comix Zone, Dr. Robotnik’s Mean Bean Machine, Ecco the Dolphin, Gunstar Heroes, Shining Force, Sonic The Hedgehog, Space Harrier II, and ToeJam & Earl. The system will come with two pads and will cost $79.99 / £79.99.