By Richard Goodwin
Updated: 09/25/19 - 5 min read
News
Samsung is the biggest Android player on the planet, but for whatever reason, it completely sucks at Android updates – and this isn’t going to change with Android 10… Click to Tweet

Google, OnePlus, Nokia, and a host of other Android phone brands have issued roadmaps for when Android 10 will be coming to their respective phones – find out more in our Android 10 Update Schedule post.

Samsung, however, is once again very late to the party. The latest reports suggest a beta build of Android might be available in October. A beta. Not the proper build. Just a test build. This Android 10 beta will be available for the Samsung Galaxy Note 10 range and Galaxy S10 models. 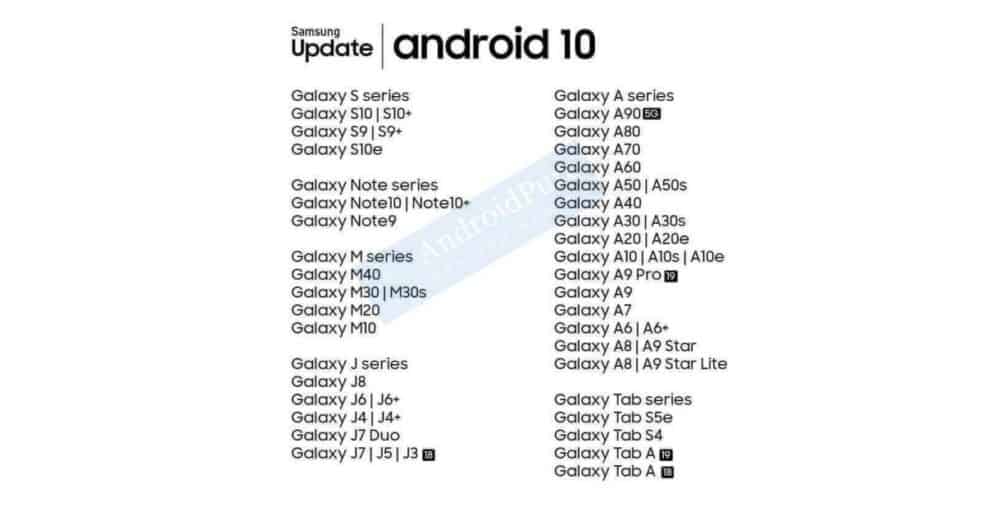 But it is a beta build. It’s not a proper Android 10 rollout like the one Google’s Pixel or the OnePlus 7 are running. And this is still just a rumor too; Samsung hasn’t officially confirmed anything yet about its plans for Android 10.

The leak also suggests that a lot of Samsung’s mid-range devices – handsets like its Galaxy A series and Galaxy J Series – will also be getting Android 10. This is good, potentially. But as noted above: none of this is official – all we have is a leaked image (above) that could have been made by a 10-year old with Microsoft Paint.

Samsung Phones NOT Getting Android 10

According to sources, Samsung will not be updating the Galaxy S8, Galaxy S8 Plus, and Galaxy Note 8 to Android 10. Why? No one knows. But I’m just going to assume that the reason is that Samsung wants you to buy a new phone – two years is long enough to hold onto a phone in Samsung’s eyes.

This kind of attitude, whereby expensive, still totally functional Android phones like the Galaxy S8 and Galaxy Note 8 are left out to pasture is really not cool. Apple, for all its faults, supports its older iPhone until they basically fall apart. Case in point: the iPhone 6 and iPhone SE got iOS 13. And those phones are ancient.

Android Updates: The #1 Reason To Switch To iPhone…

Running the latest version of Android on your phone isn’t just about bragging rights. Things like security and privacy updates happen inside these updates and they are designed to protect the user. Not having them leaves you more exposed to threats and hackers.

This is why Apple is so focussed on iOS updates, as well as ensuring ALL iPhones run on the same software. It wants the experiences and safety protocols to be the same for all iPhone users – regardless of how old their iPhone is. This is one of the main reasons why people that use iPhone stay using an iPhone.

They’re treated like actual customers, not tossed to the side once their phone is two years old. If you buy an iPhone 11 today, it’ll still be getting regular updates in 2027. Can you say the same for the Galaxy S11, which launches in Q1 2020? Of course, you can’t! That handset will stop getting support in 2022/23 most likely.

Sadly, not enough people thinking about this when buying a new phone. They get blind by all the marketing bells and whistles and forget, at its core, a phone should be useable for as long as you want to use it – not when the manufacturer decides enough is enough.

Apple knows this and I think it is one of the main reasons why its user base is so loyal. You know what you’re getting with an iPhone. You know you’re going to get support for years to come, so you don’t mind paying extra. Google is trying to emulate this with its Pixel range of phones. I just hope it can start to match Apple for quality on its forthcoming handsets like the Pixel 4.

Even now, in 2019, a decade after the first Android phone went on sale, the entire ecosystem is plagued by fragmentation and sub-par update cycles from Google’s partners. I can’t believe this is still how things are in the Android ecosystem…

My advice? If you care about your phone running the latest software, get an iPhone. Or, if you must have Android, get a Pixel phone…