Are RealMe Phones Any Good? Let’s Find Out…

RealMe is a fairly new brand. It’s not a household name yet. But that could change soon. But are RealMe phones good and, more importantly, should you consider buying one? Let’s investigate…

Who Is RealMe – Company Profile

RealMe is a Chinese company, based out of Shenzhen. The company was initially part of OPPO, which, in turn is part of the BBK group, however, RealMe spilt in 2018 becoming its own entity.

Oppo’s Vice President and Head of Overseas Department, Sky Li, led the charge to independence, confirming that RealMe – from July 30, 2018 – would be an independent brand, separate from BBK and OPPO.

Li changed the company motto to “Dare to Leap” and confirmed, via Weibo, that RealMe would focus on creating affordable, stylish phones with great specs that would be aimed at creative young people.

Between 2018 and 2020, RealMe grew rapidly. It took over the Indian market, surpassing OPPO with respect to sales and market share. In 2019, it then expanded into its native China, and then Europe.

During this period, RealMe launched the following phones:

This fast-paced growth cemented RealMe as one of the fastest growing phone brands on the planet. In fact, during 2020, RealMe was the ONLY phone company to post double-digit year-on-year growth.

And this is all down to its focus on expansion into new markets, its command of design, and its focus on design, specs, and innovative hardware. This approach is essentially a riff on what Xiaomi does – make great phones and sell them for considerably less than the competition.

At one point during 2019, RealMe’s growth was so fast that it increased its sales by 848% year or year, according to Counterpoint. RealMe phones are now available to buy in over 20 markets, including China, Europe, Southeast Asia, and India.

Initially, RealMe was owned and part of OPPO which, in turn was owned by BBK. However, in 2018, RealMe became an independent brand in a move that was initiated and led by Sky Li, OPPO’s prior Vice President and Head of Overseas Department.

Li resigned from OPPO and formed RealMe. As of right now, it is unclear if BBK plays any role on RealMe’s running. The language used by Li during the launch of the RealMe brand indicates that the company is independent, but reports suggest that RealMe is still part of the BBK holding group.

In this respect, RealMe – like OnePlus – is a quasi-independent brand that acts and operates as its own entity but still falls under the large and expansive BBK umbrella alongside Vivo, Oppo, and OnePlus.

And it is this, combined with its technical abilities, that have helped RealMe grow so fast in such a short amount of time.

Like OnePlus, a company with a very similar history, RealMe is targeting users at the lower-end of the market – the guys and gals that want a solid phone with great tech but doesn’t cost the same as an iPhone or Samsung phone.

The latest RealMe phones are the RealMe 8 Pro and RealMe 8 – both are great options that pack in a ton of specs and hardware and retail for considerably less than the competition.

Even next to the very well priced Xiaomi Mi 11, the RealMe 8 Pro looks truly outstanding from a value for money perspective. Both the RealMe 8 and RealMe 8 Pro are now available on contract and offline in the UK too, as well as other regions in Europe.

Every RealMe Phone Released To Date

Is RealMe The New OnePlus?

Because of its similar history, RealMe is often referred to as the “new OnePlus” – and there is some truth to this statement. OnePlus used to be all about value for money but it is more focussed on the higher end of the market these days – its flagships now cost more than Apple’s iPhone.

RealMe, on the other hand, is 100% focussed on producing cheap, powerful mobile phones. It always undercuts the competition and, like Xiaomi, it makes and produces quite a few different models (as you can see from the list above).

This allows RealMe to hit a range of price points, from the ultra-cheap right up to the affordable-flagship bracket of the market. If you want a RealMe flagship phone, something like the RealMe 8 Pro, you’ll pay around £279 for it – or, about 50% less than you would for the Xiaomi Mi 11 or iPhone 12.

Delivering huge amounts of specs and performance, while keeping the price of its flagship models under £300, is what has helped RealMe to grow so fast. The company’s phones are really good-looking too, as you can see below.

I’m a big fan of VIVO phones, after testing a bunch of them in 2020 and 2021. Like VIVO, RealMe is part of the BBK group, so there is plenty of parity between the two companies phones.

They’re solidly made, pack in great cameras, and they all have amazing fast charging abilities – abilities that leave Apple and Samsung in the dust.

Would I recommend you buy a RealMe phone? Yes. Definitely. You’re not going to get the same level of software support as you do with a Samsung phone, a Pixel phone, or an iPhone. But from a value for money perspective, RealMe phones are kind of unbeatable right now.

I mean, the RealMe 8 Pro has specs that destroy the iPhone 11 and iPhone 12, save for its lack of 5G, and it retails for around 50% less than both of those phones.

If you want a powerful smartphone with a brilliant camera, and OLED display, and tons of storage with a great battery, it is really hard not to be impressed with the RealMe 8 Pro.

How Much Do RealMe Phones Cost?

The price of RealMe phones varies. As noted earlier, the company makes a range of Android phones and accessories. You will pay anywhere from £100 to £500 for a RealMe phone, depending on its specs.

Here’s a handy table that outlines how much some of RealMe’s most popular phones cost.

Are RealMe Phones Available In The UK?

Yes, RealMe phones are available to buy in the UK. RealMe announced that some UK networks – EE and Three – would be carrying its RealMe 8 and RealMe 8 Pro handsets, a move that will further help RealMe bump its sales in the UK.

Alternatively, you can buy RealMe phones unlocked direct from RealMe, it has its own dedicated store where you can pick up its phones and accessories.

And for the price RealMe charges, many users tend to just skip the contract plans and buy the phone outright. Students also get 5% off all purchases.

This way, you own the phone outright and can then shop around for a killer SIM-only deal with unlimited data (like this one from Three).

What About The USA?

The US market is slightly tricky, if you want to pick up cheaper, Chinese-brand phones from companies like OPPO, VIVO, and RealMe. OnePlus has started making inroads in the US market, but RealMe, OPPO and VIVO have zero presence in the US with no carrier support and no official stores.

You can import RealMe phones via specialist retailers – just make sure that you get one that has the right radios and LTE bands for your carrier.

Plenty of people do this, but you need to keep in mind that support isn’t great as the company that produces the phone doesn’t really have any presence in the US.

Any phone you buy is only as good as the software it runs, and while RealMe phones are powered by Android like most other phones they run on a custom UI which is called the RealMe UI.

Not so long ago, custom Android skins – the skins used by Google’s hardware partners – were pretty terrible. This is why there are so many Android Launcher apps in the Play Store.

Thankfully, this new generation of Android phone companies – VIVO, RealMe, OPPO, and Xiaomi – know that the software experience of users is extremely important, so they have accordingly invested heavily in its development.

The RealMe UI is a gorgeous looking theme; it is clean, well designed, and is packed with useful features. You have elements of Google’s Material Design philosophy, beautiful blended color palettes, and easy to use navigation. RealMe UI uses Android’s traditional three key navigation: Multitasking, Home, and Back.

And that’s just the main features. The RealMe UI is a great piece of software; it is designed to a high standard, it looks stunning, and it is packed with enough features and quirks to keep you busy for weeks.

RealMe phones use both MediaTek and Qualcomm chipsets; it depends on what model you go for. As a general rule of thumb, RealMe’s cheaper phones tend to use MediaTek CPUs, while its more expensive models tend to use Qualcomm’s Snapdragon platform.

Case in point: the RealMe 8 uses a MediaTek CPU, while the RealMe 8 Pro uses Qualcomm’s Snapdragon 730G – the same CPU as the Pixel 5.

Similarly, RealMe has officially confirmed that it will release Snapdragon 888 phones in 2021. The phone is currently codenamed “Race” and it will arrive at some point during 2021.

Like VIVO and Xiaomi, RealMe is BIG on fast charge – the company, alongside its stable mates, has done more for fast charging that both Apple and Samsung combined.

Like VIVO, RealMe uses Super VOOC charging on its phones (VOOC stands for Voltage Open Loop Multi-step Constant-Current Charging) and it is the technology that enables RealMe to deliver standard fast charge speeds of 50W to most of its handsets.

SuperVOOC Flash Charge can fully charge a smartphone in only 35 minutes – that’s around four times faster than what you get with an iPhone. Even Apple’s most expensive iPhone 12 Pro Max model.

This means, should you go with a RealMe phone, you’ll never have to worry about battery life ever again. Not only are most RealMe phones kitted out with large battery cells – usually 4500mAh or 5000mAh – but they also possess SuperVOOC fast charging, so you can charge your phone from dead to 100% in less than 30 minutes.

Wrapping Up: Should You Buy A RealMe Phone?

As you can see from this post: I’m a pretty big fan of RealMe. Part of the thing that makes RealMe so interesting is that it is constantly pushing the boundaries of what is possible with phones – whether you’re talking about pricing, camera tech, or charging.

Apple’s iPhone might be the most popular phone on the planet, but it lacks plenty of the things you’ll find on a more affordable RealMe phone – things like Fast Charge and four camera sensors.

Again, RealMe phones are designed to be cheap; they’re not flagships but they are very capable mid-range phones that look and perform much like a flagship. And for many users, this is all you’ll want and need.

RealMe has a pretty good track record with Android updates too; it did struggle with Android 11 – only releasing beta builds of the software to a selection of its phones. The company has, however, confirmed that it will be updating as many of its phones as possible to Android 12.

If you want rock-solid Android updates, go with a Pixel phone – the Pixel 4a or Pixel 4a 5G, in this context – or a phone from Samsung. Both Samsung and Google guarantee three years’ worth of Android updates, so if running the latest software is important to you, go with either a Pixel or a Samsung phone.

If all you want is a good-looking, performance phone that costs less than £300 and looks like a £1000 phone, then I would definitely recommend you check out RealMe. And I would be looking squarely at the RealMe 8 Pro right now – it is the best phone in the range. 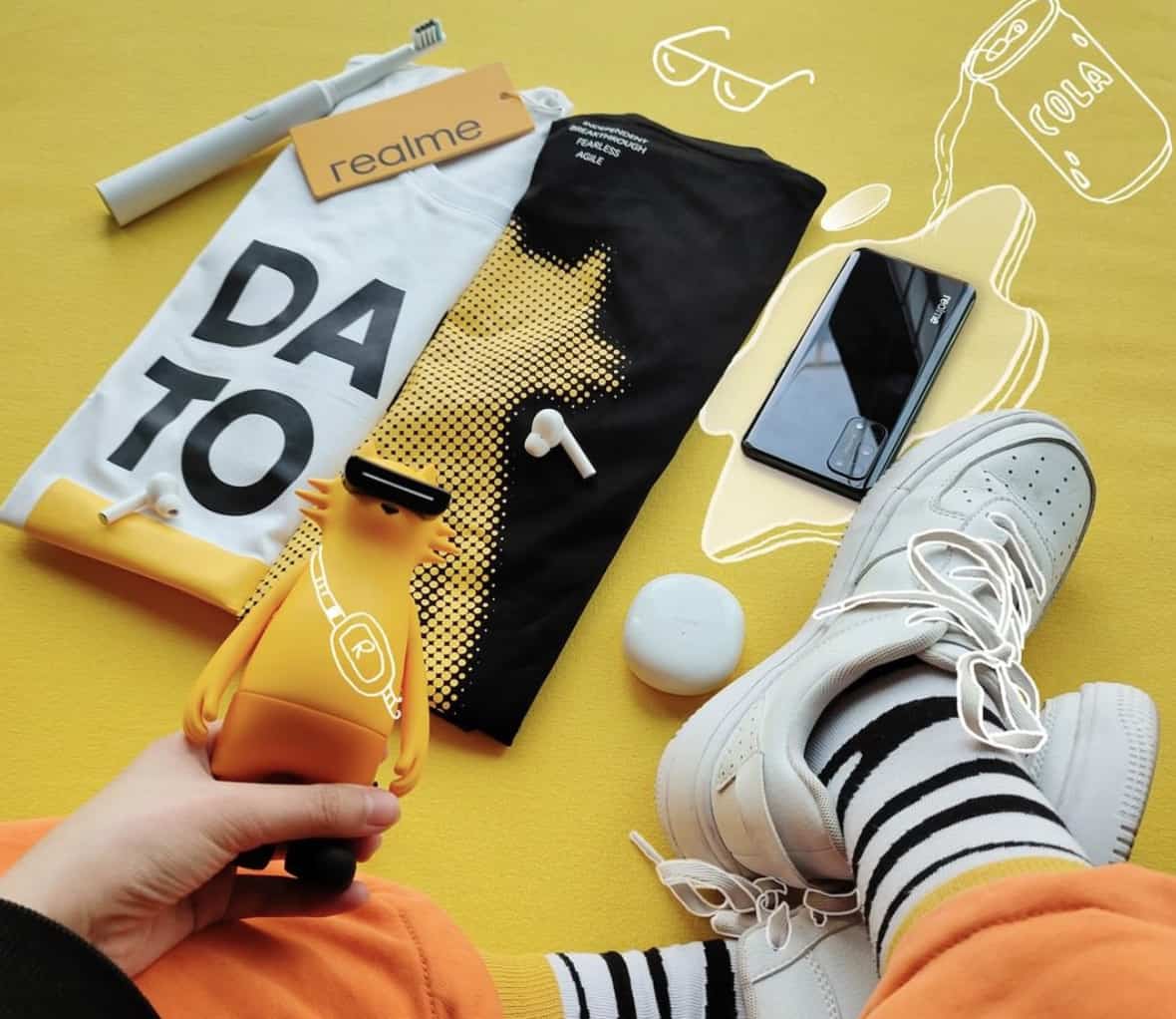