Pixel 3 Screen Issues/Problems: What You Need To Know…

Let’s not beat about the bush here; the launch of the Pixel 3 has been something of a car crash. Not only was the phone leaked before it was announced – robbing it of any chance of surprising people – it has been hit by a series of issues that have left many Google fans with buyer’s remorse.

Some of these problems were simply teething troubles that have since been addressed by this week’s December Security Update, while others relate to hardware – namely production inconsistencies with the LG-made OLED panel which have resulted in many screens have colour gradient problems (our first review unit suffered from this, but our second is fine – it really is an OLED lottery).

One problem that doesn’t seem to have been fixed by the update relates to flashing or flickering screens on both Pixel 3 and Pixel 3 XL devices. Reports about flashing screens appeared last month, along with many outlets claiming that the fault was hardware-related and could not be fixed by software.

We can confirm that this is the case; prior to the update launching, we had the issue with our review Pixel 3 handset. It starts with a flash as the phone’s always-on display is triggered (ours was on the bottom quarter of the screen) but then becomes a flicker in the same area when the phone is in active use.

A day after installing the update, we found that this issue returned with a vengeance; the entire display began to flash and strobe violently as if the screen itself was about to die. Disabling the always-on feature prevented this from happening when the phone was idle, and in both cases, when left overnight the screen appeared to fix itself.

If all of this sounds familiar, then that may be because you’re recalling horror stories from last year which focused on the Pixel 2 XL – which also has an LG-made OLED.

So what’s the solution? Some users have said that turning off the ambient display prevents this from ever happening, while others have said the issue goes away when the phone is factory reset (indeed, contacting Google results in the company suggesting you do that or run in Safe Mode). However, we’ve also seen users claim that both of these things fail to fix the issue and it comes back eventually.

Given that the Pixel 2 XL had an almost identical issue last year – which was subsequently fixed via software update – there is some hope this can be solved without having to return the phone to Google, but at the moment, that is exactly what the company is asking affected users to do. We’ve even seen reports that replacement phones exhibit the same behaviour after a few days.

If you’re impacted by this problem, then be sure to add your voice to this rapidly-growing issue topic on Google’s support forums. If enough voices are added to the cause, we’re more likely to see an official response from the firm, or at least an increased effort to solve it. However, for some long-suffering users, it may be too late to convince them that this phone is worth owning. 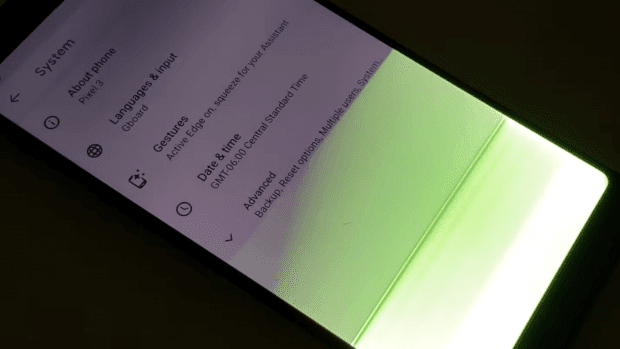