The Nvidia Shield TV system has been around since 2015, but it remains one of the best options when it comes to streaming 4K video, Android TV apps, and retro gaming emulation. Nvidia is clearly aware of this as it re-released the unit in 2017 and is continuing to support it with updates many years after launch.

However, one of the biggest headaches with the system is its optional (and quite pricey) remote control; it may look slim and attractive but it has terrible battery life, as well as wildly inconsistent performance. There’s nothing more annoying than sitting down to watch a movie and then realizing that the remote has run out of battery and must be used while plugged into the Shield’s USB charging port. As a result, many users have resigned themselves to using the bulky gamepad to control their Shield TV units instead – hardly an ideal solution for a set-top box.

Thankfully, Nvidia has now answered all of our prayers by releasing an Android and iOS application which functions as a remote control for the Shield TV. Not only does it offer access to all of the usual functions, but it also allows you to sign in to the GeForce Now game streaming service faster thanks to its virtual mousepad, drastically reducing waiting time.

To download and run the app you’ll need 7.1 of the Shield TV software, which recently arrived on the platform and along with Android Oreo and a massive overhaul in how the UI looks.

The Shield launched back in May 2015 and we really liked it. We also liked the revised 2017 model – which includes the same Tegra X1 chipset but in a refined casing – and praised its media-streaming capabilities, saying “If you have a 4K TV, like gaming, and want tons of options when it comes to content and streaming, you really do need one of these in your life. The gaming aspect is huge too, as you can play games for a very small cost at your leisure.”

If you use the Shield TV as your go-to media streaming box then this news is going to be very welcome indeed; head to the Google Play or App Store to download the remote control application and finally banish that irksome (and stamina-challenged) dedicated remote control to the kitchen drawer. Your phone needs to be connected to the same Wi-Fi network as the Shield TV itself, but apart from that, it’s plain sailing. 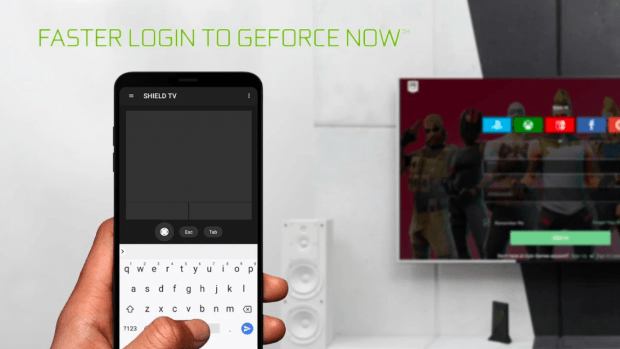