LG’s 65in OLED TV Can Roll Up Like PAPER!

The dawn of rollable OLED is almost upon us, and it will bring with it some very impressive new form factors for phones, tablets, and, in this case, HDTVs.

LG just took the wraps of its new 65in OLED TV, and while it is still just a concept, it gives us a very real glimpse of what’s just around the corner with respect to product design and display technology.

The display is housed inside a block, where all the components live, and but the actual display is just one big, rollable, electronic piece of paper – like a poster. It will roll-up when not in use and be ultra-thin.

The TV is a 4K unit, obviously, and is being positioned as a great option for those that value space in their living room, as when you’re not using the TV it will simply roll-up in its box.

The wider implications of this technology are for the mobile space, however, especially since word got out about Samsung aiming to release a tablet device based on this type of display tech during 2018/19.

The price, at least at first, will likely be MASSIVE, however, especially for larger 65in OLED panels of the type used in LG’s HDTVs. Over time though, prices will fall as the technology becomes more ubiquitous.

The concept is very impressive-looking though and we might even see a working unit at CES 2018 later in this quarter.

Personally, I cannot wait for the advent of rollable mobile devices and tablets. I’ve been writing about them ever since I first started in technology, way back in 2009, when they were just a theoretical idea. Fast forward 9 years, and we nearly have our first proper, rollable devices. 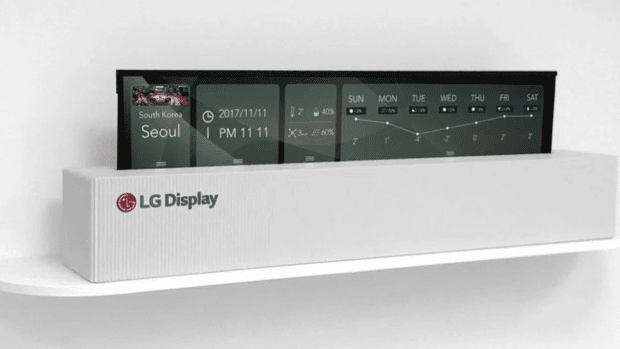