In a new leaked patent, Apple examines new ways to create a display that can be installed on a curved surface. A future version of the Apple iPhone could have a display that wraps around the body of the device or, alternatively, have a body with more rounded curves.

Smartphones and other mobile devices are, in general, square in shape, even though many manufacturers have experimented with flexible and curved displays on the sides, if you look at the iPhone, all current models offer a flat-screen design, which ends in 90-degree angles. A typical display includes stacked structures, including a layer of thin, film transistors for pixel viewing, a colored layer for adding color to pixels, a panel for allowing touch inputs, and a layer of glass for coverage. While it is easy to stack such elements on a flat surface, it may become difficult on a curved surface.

In a patent issued Tuesday by the United States Patent and Trademark Office entitled “Electronic devices with convex displays”, Apple suggests that a device could include external displays on a curved plane, such as the body of a smartphone. In short, Apple suggests that one or more flexible layers could be added on top of a cover with a curved shape, or on the bottom concave on a rigid and convex cover. A set of tactile sensors is stacked above or below the flexible screen layer and an external protective layer, or an internal support structure, complete the stack, depending on the construction. 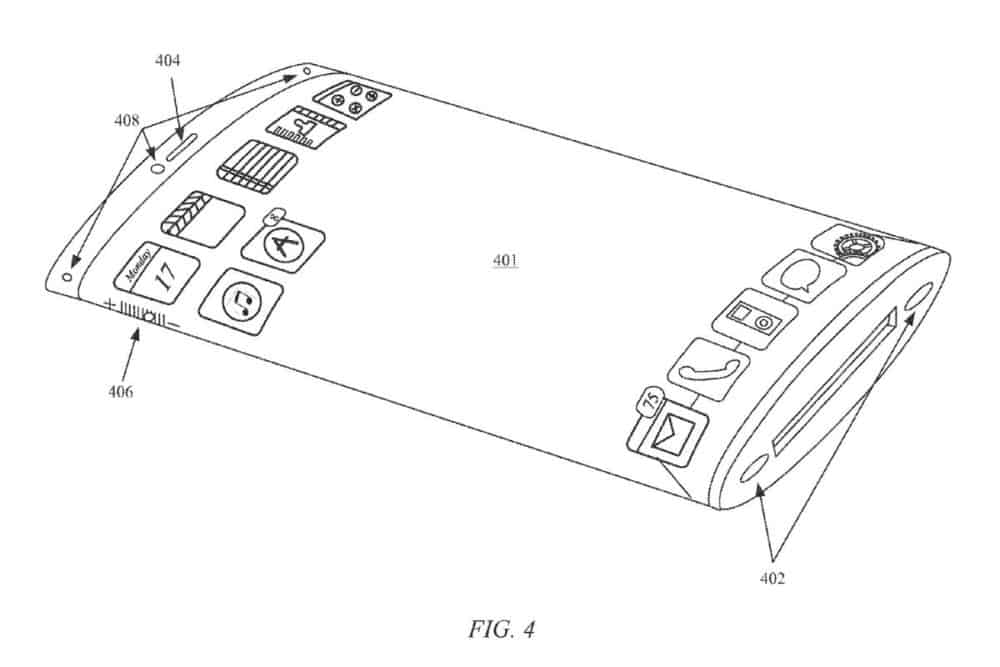 Going into the details of the patent, the display could be made with flexible OLED or LCD panels, the rigid covering layer or the housing could be made of glass, while a reinforcement layer could be made of metal. The viewing section could also benefit from a flexible polymeric substrate, for easier application on the other components in the stack.

Compared to other similar patents related to the application of unusual displays in the design of smartphones, the patent seems apparently light in the details related to the actual production of the panel. It seems that the patent suggests more how to create this type of display to support the idea of ​​making a smartphone or mobile device with a round body.

Multiple images and statements written within the patent suggest the advantages, in particular, the round shape could also make the device appear thinner and potentially allow a larger viewing area, with a dedicated part that wraps around the edges and on the back. Additionally, smaller components may be optimally positioned within narrower sections of the body.

The search for an iPhone with a rounder appearance started in 2013 and was resumed in late 2019. Obviously, the presence of a similar patent does not provide guarantees on the creation of a curved iPhone, but it is still a clue that Apple leaves itself open for the future. And this could well be the perfect antidote to the current folding phone craze that is sweeping the Android space.