Thanks to the tests carried out with Geekbench, we knew of the launch of the Galaxy A42 5G before anyone else, a model that should hit the market as soon as the end of 2020. A similar case has occurred with the arrival of another model from South Korea, but this time by LG.

It is the LG Q92, a device that is taking the last steps in its set-up before being released to the markets. And thanks to the tests carried out in Geekbench we know some of its specification details. In the image below it is possible to check the identification code (LM-Q920N) as well as the score achieved. The chipset is the same used by OnePlus in Nord and the LG Q92 will have 6GB of RAM: 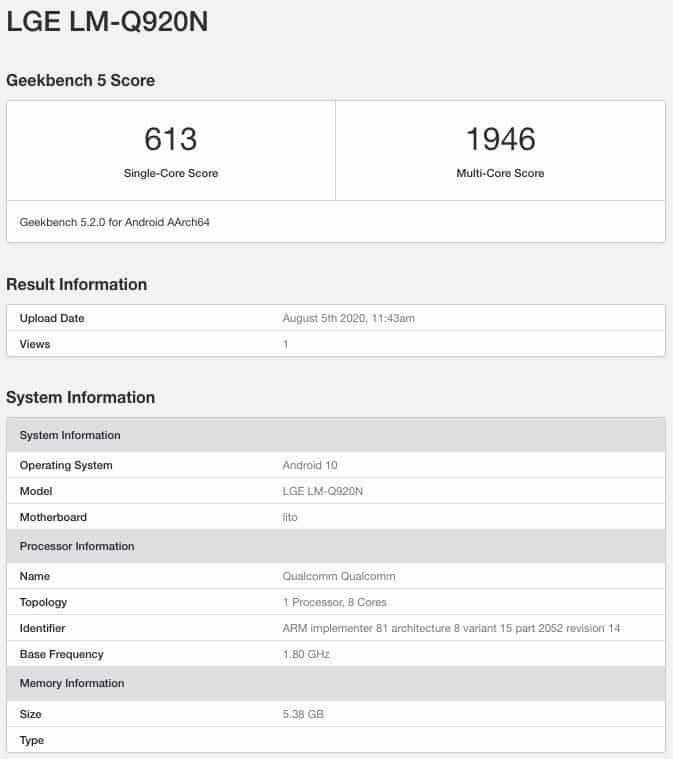 The LG Q92 will use the Snapdragon 765G, which is also known as “Lito”, already seen to be used in other models, mainly Samsung Galaxy A42.

The LG Q92 Geekbench test gives evidence of 6GB of RAM (5.38 to be exact), to accompany the aforementioned processor and internal storage of 128GB. The hardware of the device comprises a screen with FHD + resolution (1,080 x 2,400 pixels) of about 6 inches, 420 PPI, the same value as that used in the LG Velvet, although in this case, you could bet on an LCD panel instead of an OLED one – this will keep the price down.

The LG Q92 will be, based on the specifications, a mid-range handset. It also looks to be the first mid-range from LG that holds its own next to bigger competitors. This device would arrive as part of the Q series, which has 13 devices and is expected to be offered by the largest operators in South Korea, as well as in several other markets. It is possible that it will reach the markets in the UK, Europe, and North America as a direct competitor of the Galaxy A51 and A71 and its 5G variants.