Nintendo Switch Online | Everything You Need To Know

After months of teasing and drip-feed announcements, Nintendo is finally launching its rival to Xbox Live and PlayStation Plus in the form of Nintendo Switch Online. This paid-for service will allow you to play online on your Switch console, save game data in the cloud, play vintage NES titles and earn exclusive rewards.

But wait, you might be saying to yourself – I have a Switch and have been happily playing online since launch without having to pay a single penny – what gives? Well, Nintendo has basically given you online play for free since the console released and has absorbed the cost of running the required servers. That all changes from September 18th, when the next system update – 6.0.0 – arrives. From then, you won’t be able to play online games without a Nintendo Switch Online subscription.

Nintendo Switch Online launches on September 18th and will offer the ability to play against other people online in a wide range of games. While it hasn’t been confirmed as yet, we’d imagine that these games will benefit from better online infrastructure than before, and will also presumably come with features such as private rooms and the ability to team up more easily with people you know online. At the moment, each Switch game has to offer its own matchmaking service, and some publishers have neglected this side of things (FIFA 18 is a prime example). Our fingers are crossed that Nintendo Switch Online will include a system-level method of connecting players that will take the load off developers.

Voice chat will not be included as standard with Nintendo Switch Online, although some Switch titles – like Fortnite – have their own built-in voice chat system. Nintendo would prefer developers to use its Nintendo Switch Online smartphone application, which allows you to converse with people you’re playing with via the phone itself. It’s hardly an elegant solution, but it does work – Splatoon 2 already has support for this feature.

As well as online play, you’ll be able to save your game data to the cloud. This is vital for one key reason – save data on Switch is stored on your console and NOT on physical game cards. So if your machine gets lost or is damaged, you’ve lost the many hours of progress you’ve put in. Cloud saves are available on Xbox One and PlayStation 4 already and have been a much-requested feature for Switch. Unfortnately, there is a catch – not every game will allow for cloud saves, because Nintendo says people may find ways to manipulate the system and cheat. Splatoon 2, Dark Souls and FIFA 19 will all have cloud saves disabled, and other titles may have the feature turned off in the future.

That’s not all; by subscribing to Nintendo Switch Online you’ll also get access to a range of NES titles, many of which will be retrofitted with online play. Games like Ice Climber, The Legend of Zelda, Balloon Fight, Super Mario Bros., Super Mario Bros. 3 and Donkey Kong. More games will be added as time goes on, and it is assumed that in the fullness of time, other systems will be added – such as the SNES, Game Boy and perhaps even GameCube. Given that Nintendo has effectively killed the Virtual Console service it ran on its Wii, Wii U and 3DS consoles, this new service is expected to replace it, to a certain degree.

Here are the 10 NES games that will be available at launch:

Finally, Nintendo Switch Online subscribers will get special rewards each month, but Nintendo hasn’t revealed what these will be as yet. They could be discounts on downloadable software or even free games, like you get with PlayStation Plus.

Given that we’ve been playing online for 18 months without paying a penny, charging for connectivity now might seem like a slap in the face for long-standing Switch fans. However, by charging a monthly fee Nintendo will have the funds to make massive improvements to the system, as well as ensuring that problems such as server load don’t ruin your games. And while the initial batch of NES games is perhaps a little underwhelming – especially as we’ve played many of these same titles on Wii, Wii U and 3DS before – it will hopefully pave the way for more exciting releases on the console in the near future.

Finally, the prospect of exclusive rewards could be a game-changer; the fact that both Microsoft and Sony give away hundreds of pounds of free software every month via their own online services surely won’t be lost on Nintendo; perhaps we will see AAA titles offered as free downloads via Nintendo Switch Online? For less than £20, this is could end up being something of a bargain, especially when compared to what Sony and Microsoft are charging per year. 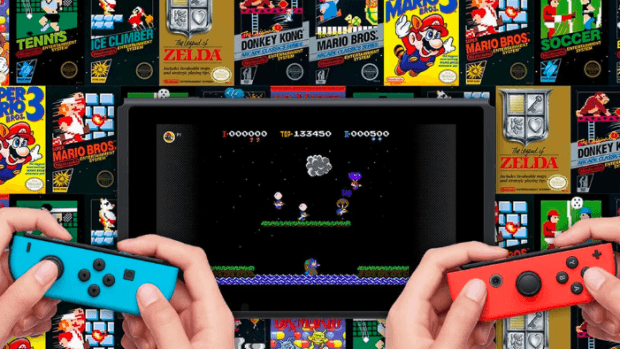