Fortnite is a Battle Royale game that stepped onto the market at the perfect time. The genre was already rising in popularity, owing to the success of H1Z1 and PUBG, but Fortnite took its hand and launched it into the stratosphere.

In Fortnite, upwards of 100 players glide down from a party-themed bus that is tethered to a hot air balloon and land at a location of their choice. From there, they have to find guns, ammo, shield and various other gadgets, which they’ll use to eliminate every other player or team on the island.

‘Last man standing’ is the game, and with each game lasting just over 20 minutes at most if amongst the last few teams, it’s just addictive enough to fall into the “one more game” trap.

Epic Games, the owners and developers of Fortnite, are worth just short of $30 billion. Of course, they do have some other pretty popular games in their portfolio, but it’s indisputable that these funds were generated from Fortnite: Battle Royale.

How Much Does Fortnite Cost?

Interestingly, Epic Games’ cash cow ‘Fortnite’ is in fact free to download and play. The game’s revenue comes from in-game purchases in the form of the season-by-season Battle Passes as well as skins, pickaxes, dances and emotes which, unlike most games, actually offer no competitive advantage.

Skins are essentially costumes for your characters and although they do not help you win the game, except in a rare few circumstances that have had to be removed or altered, they are very popular within the community.

Skins cost anywhere between 800 and 2,000 V-Bucks, depending on which ‘rarity’ level Epic assigns to them. The cheaper skins are usually basic character models wearing something different and the more expensive skins can include real-life celebrities and superheroes, like Ariana Grande or Superman.

The Battle Pass is a reward system in which the more you play, the more you level up and the more Battle Stars you earn. These Battle Stars can then be used to purchase the contents of the Battle Pass, which will include skins relevant to that season’s storyline, as well as back blings, pickaxes, emotes, dances, banners, loading screens, lobby music and even a total of 1,500 V-bucks.

The Battle Pass costs 950 V-Bucks, so, technically, after you’ve bought one season’s Battle Pass, it begins to pay for itself as long as you don’t buy too many other items from the Item Shop.

Fortnite has also been known to host live concerts featuring some of the world’s most popular artists. Marshmello, Travis Scott and Ariana Grande have graced the in-game virtual stage so far, with many other top DJs doing their bit on the decks on the Party Royale island, including Kaskade, Deadmau5, Diplo, Steve Aoki and Dillon Francis.

What’s incredible is that these events are free to participate in, too. Although these gigs may be nothing like the real deal, it’s a great first taste for many young fans that hope to one day see their favourite artists in real life. It’s also great marketing for the artists and a certain pocket-liner for Epic Games, so everyone’s a winner.

There have been many hints of more concerts being on the way, too. The biggest hint being the acquisition of an LA-based studio by Epic Games, which will be used to transmit a live feed of performing artists to the Battle Royale or Party Royale islands. We highly doubt that any of these concerts or DJ sets will ever cost money to players.

So, the main answer to the question of how Fortnite makes money for the company is ‘V-Bucks’. But what exactly are these, where can they be bought and how much do they cost?

V-Bucks are the in-game currency on Fortnite. Instead of buying each individual item from the Item Shop with your debit card or through PayPal, you can buy stacks of V-Bucks which are then used to buy cosmetics and more from the Item Shop.

V-Bucks can be bought in-game under a separate tab in the lobby or from some physical stores like GameStop in the form of gift cards. They can also be earned through the Battle Pass or by completing quests on Fortnite: Save The World.

Like with most things in life, the more you buy, the better value you get. Here’s how much V-Bucks cost:

How Much Money Does Fortnite Make?

It’s difficult to say how much money Fortnite produces for Epic each year because there are so many income streams.

It’s believed that Fortnite brought in another $5.1 billion in 2020, falling only $300 million short of 2018’s figure, regardless of the fact that 2018 was the peak popularity time for the game. This shows just how much all these brand deals have been worth to the company. 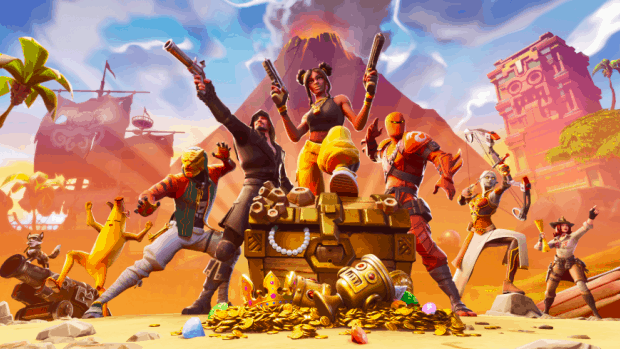 Fortnite remains amongst the world’s most popular video games with a thriving online community - but can it still be played when there’s no internet access? Let’s find out…