The 10 Best Puzzle Games For iPhone (#1 is IMMENSE)

Puzzle games are nothing new. They’ve been around almost as long as humanity itself–just think of chess. In the modern era, perhaps the most well-known puzzle game is the Rubix Cube. Then of course, most recently, there are thousands of puzzle games made for iPhone.

Matter of fact, out of all the types of games on the iPhone, many people find puzzles one the best. This is because they are great time-wasters that can keep you entertained for just as long as need be.

But with the thousands of puzzle games available for iPhone, it’s often hard to separate the wheat from the chaff. That’s where this list comes in. Here we give you our top 10 picks for puzzle games on iPhone.

The sequel to the mega-hit Monument Valley, this second incursion of this beautiful architectural puzzler features a brand new adventure set amongst dazzling worlds.

You play Ro as she teaches her child about the mysteries of the valley, exploring stunning environments and manipulating architecture to guide them on their way.

“Mad King Mac has kidnapped your father and stolen your golden nut! Solve puzzles and battle goons as you explore and battle your way through the kingdom,” says the description–and thus your journey begins! “Discover hidden treasure, collect nuts, unlock special powers and much more as you play through 17 amazing and unique areas where there’s always something new to discover.”

This beautiful puzzle game sees players interacting with a series of illustrated panels in order for the elements in those panels to interact with each other. The game is short, but the art direction and story make it worth it.

Moonlight Mahjong is one of the games I’ve had on my iPhone for years. Seriously, it’s probably been on my iPhone for at least five years now. It’s my go-to time-waster/brain-teaser when I just need a little release.

The game is Mahjong Solitaire in beautiful virtual reality 3D. You can pinch, zoom, and rotate around the Mahjong pieces to get a better idea of which pieces you have, where they are, and how to connect them.

There’s also a wide variety of modes including scramble, challenge, puzzle, and even relaxation. If you’ve never played Mahjong, this game is a great place to start. It’s also the most beautiful Mahjong game on iOS.


Threes! is the addictive numbers puzzler that has taken the mobile world by storm. In it you mesh numbers together to match them. Once matched, those numbers double.

Your goal is to match as many numbers on the board before it fills up. The game has traditionally cost money but now the publisher has released this free ad-supported version.

Give it a download and I can guarantee you you’ll realize you’ve never played a better time waster. And the little voices the number blocks talk in are just a huge bonus (you’ll see what I mean).


Dark Echo is one of the greatest puzzle games to come out in years. The game’s description explains this unique experience best: “Trapped in darkness, you must use visualized sound to guide your way through threatening environments.

“The sounds you create will bounce off obstacles, revealing the shape of the surrounding world. It won’t be long before your only way of sensing the world attracts a horrifying evil that devours both sound and souls.” Just beware of those red lines…

The classic game from Microsoft and the world’s #1 solitaire game. Microsoft Solitaire Collection offers five of the most iconic Solitaire games in one app. Klondike, Spider, Freecell, Tripeaks, and Pyramid are all here as are the basic graphics that looked cutting edge 25 years ago when the company first created the Windows version of the game.

Monument Valley is one of those games that make you marvel at how cool multi-touch gaming can be and that also makes you awestruck at the same time because it looks so beautiful.

In the game, you help Princess Ida navigate around surreal architectural mazes with impossible geometry–manipulating the world to help her clear a path through it. Almost just as beautiful as the graphics are the accompanying sound effects. It’s a short game, but well worth the price.

The prequel to the hit noir puzzle game, this game is a stand-alone entry with a brand new story into the Framed world. Years ago, a mysterious ship smuggled precious cargo into an exotic land…and we won’t tell you more than that lest we ruin the surprises.

However, the story isn’t set, as the object of this game is to change the comic book panes’ order—and thus change the outcome of the game. It’s a fantastic puzzler.

If you’re a fan of the first-person shooter Hitman video game series, Hitman GO…is nothing like that–it’s even better. Instead of FPS action, Hitman Go is a highly visualized turn-based puzzle game not that different than chess if the object of chess were to assassinate people.

But forget about the style of play. This game needs to be downloaded by everyone because it is jaw-droppingly beautiful. Every level is a diorama-style set piece that looks like a stunning scale model you might see in an architecture firm’s lobby.

Everything from the design to the lighting to the music and sound effects is styled to perfection. 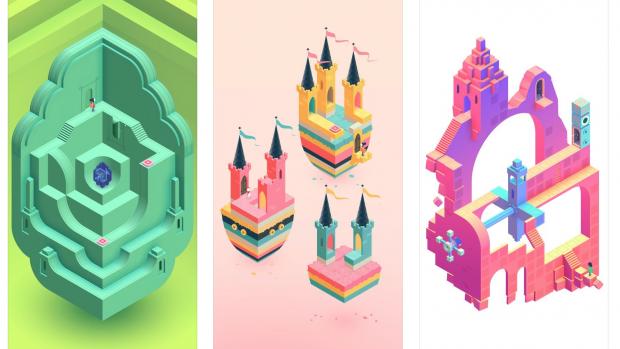