Microsoft Teams vs. Slack – Is The Biggest Actually The Best?

Microsoft Teams vs. Slack – which is the best collaborative tool for businesses and start-ups? Let’s take a look at how the compare and differ to find out…

Microsoft has fired a warning shot over Slack’s bow, claiming its Teams app is bigger and growing faster than Slack. According to Microsoft, Teams now has over 13 million daily active users – that’s 3 million more than Slack currently has (it claims 10 million).

Furthermore, Microsoft Teams now has over 19 million active users on its platform per week. Slack, which launched in 2014, no longer shares its weekly-usage data with the public. The reason? No one knows but in 2017 it had around 9 million weekly users.

You now also have Google Workspace to consider as well, Google’s rebranded and totally revamped version of G-Suite. Like Teams, Google Workspace is a fully-fledged suite of tools – tools like Google Drive, Sheets, Gmail, Docs, Meet, and more.

But the key difference with Google Workspace is communication. Google has brought in a range of new features from things like Smart Chip, a list of contact information for everyone in your network, and picture-in-picture video support, so you can work on any document collaboratively in real-time.

The big concept behind Google Workspace is to make working from home, in teams, easier: the ability to have Zoom-style chats with Google Docs and Google Sheets is huge. You could have several team members working on a document in real-time, all plugged in via video.

Neither Slack nor Teams has anything quite like this. Plus, Google Workspace is competitively priced as well – prices start from as little as $6 per month. And you get access to Google Docs which is arguably one of the best productivity, MS Office alternatives on the market (even if finding word count on Google Docs kind of sucks).

Looking at the above stats, it would appear that Microsoft certainly now has the edge over Slack – it has more weekly and daily users. And not just a few more, we’re talking millions here. Also: keep in mind that Slack has had a two year head-start on Microsoft; Teams first launched in 2016.

Be that as it may, Microsoft does have a distinct advantage over Slack – and it goes by the name of Windows. Millions of businesses the globe over use Windows machines and Microsoft software, so it is a damn-sight easier for Microsoft to shoe-in new products like Teams than it is for Slack to pick up new users.

Microsoft also added Teams to its Office 365 bundle in 2017 as well, further cementing the IM applications rise to prominence during the next two years. As you can see in the graph below, the moment Teams was added to Office 365, growth picked up – dramatically.

“Teams, I think, is a canonical example of the flagship of the Microsoft 365 product, which is person-centred, customer-centred,” said Rajesh Jha, Microsoft’s executive vice president for experiences and devices, and the person responsible for Office at the company.

He added: “You select the group that you’re doing a project in or you’re working with, and all the tools and the applications and the context all comes to you there.”

First, let’s take a look at how similar Slack and Microsoft’s Teams are in order to see which does what best and who’s missing things.

And Now Some Points on How They’re Different…

However, Microsoft’s advantage could well be its undoing because Slack is now bringing more and more Office 365 integrations to its platform, and this could well help bolster its position in the market, as a proper collaborative tool for businesses – even those committed to Windows.

Bottomline? Both solutions offer excellent sharing options but a lot of the perceived advantages of using either will depend on what platform your business runs on; if you’re a Google Drive kinda business, then Slack is brilliant. All about Windows? Go with Teams.

Still, Slack has added in better support for Office 365 in 2019; it now has far better integration with Office apps and files, including the new Outlook calendar and mail app. You can also preview Office files in it too, which is definitely a step in the right direction for Slack.

Microsoft Teams vs. Slack: Pricing – How Much Do They Cost?

You can get free accounts for both Microsoft’s Teams and Slack. And below, you can see what each freemium account offers:

Microsoft Teams vs. Slack – Which is Best?

This is a question that is coming up more and more lately. But, as always, it is tricky to answer definitively because the answer depends, largely, on an individual team or businesses distinct needs and requirements – there are just far too many variables to simply say Slack is better because of X, Y, Z…

And it isn’t a case of apples n’ oranges here, either; both Slack and Teams are very similar in what they set out to achieve. For this reason, careful consideration is required before committing to one over the other….

Microsoft’s Teams solution has some pretty hefty advantages over Slack because it plugs directly into Microsoft’s expansive ecosystem – an ecosystem that is widely used by millions of existing businesses.

For this reason, Teams is always going to be more attractive to legacy businesses that are already fully immersed in Microsoft’s software ecosystem. It wouldn’t make any sense to run Microsoft software and then, for your collaborative tools, switch to a third-party solution like Slack.

However, for any company that is NOT affiliated or immersed in Microsoft’s technology – and there are quite a few – Slack is an extremely attractive option. As a collaboration tool, Slack is one for the best in the business with a killer mobile and desktop experience, as well as great file and media sharing abilities.

Also, don’t forget, Slack started life a start-up just five years ago. Fast-forward to 2019 and Slack has gone public, following an IPO in 2019, a process that will add billions into its R&D reserves. What Slack has achieved in just five short years is beyond impressive – it went from nobody to one of the #1 collaboration tools on the planet, more or less overnight.

And there’s plenty of updates coming to Slack before the close of the year, as you can see below:

Updates That Are Now Ready To Use:

Updates Coming Inside The Next Few Weeks:

Updates Coming Later on This Year:

Which Do We Prefer – Slack or Teams?

Right now, KYM is firmly in the Slack camp. As one of the most successful start-ups of the past decade, Slack has created one of the most effective collaborative communication tools on the planet. It’s simple to deploy, simple to use, and it is packed with tons of features. And best of all, you can try it for absolutely nothing.

I’m also more of a Google Drive kinda guy as well. I use Macs, seldom touch Microsoft software, so Slack for me was a no-brainer. That’s not to say I’d never use Teams; the software and its basis inside Office 365 is a huge plus for the technology. And this aspect alone will be what continues to drive Teams adoption into the future.

Investors love Slack too; the company’s recent IPO saw the companies shares trading on the New York Stock Exchange for $38.50 – well above the $26 guide price. The value of the company is now capped at $24 billion, making it one of the most successful start-ups of all time, next to Facebook and Google.

However, Slack is still losing money – growth is expensive, after all…

“Like most of its peers,” notes The Guardian, “Slack is losing money – it lost $138.9m last year and according to the company losses will “significantly increase” over the next few years. Revenues are growing fast up to $400m from $100m three years ago, but growth is slowing as the company gets larger and rival services from Microsoft and Google could eat into its business.” 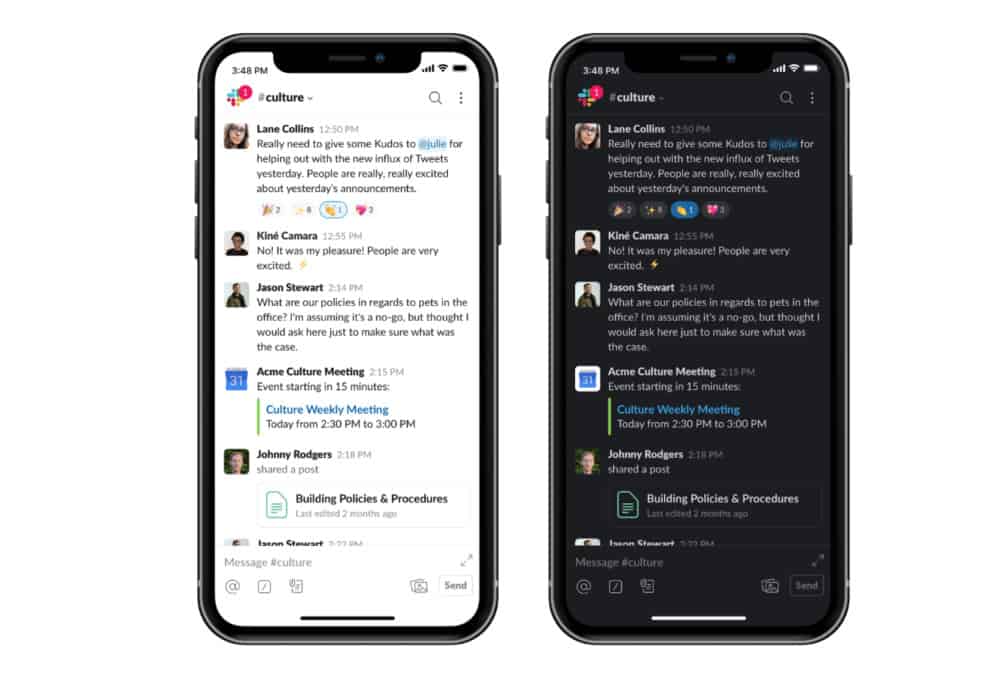