Cortana Has A Future – Just Don’t Call It Cortana…

Microsoft is removing Cortana from ALL major platforms, including Windows 10 and Xbox. And the reason? Google Assistant and Alexa…

Trying to go head-to-head with Google Assistant on Android and Siri on iPhones was always going to be a big ask for Microsoft’s Cortana. How do you compete with voice assistants (that aren’t Bixby) that are hard-wired into a phone’s operating system?

And despite Amazon’s valiant resilience in this regard with Alexa, which is available on pretty much everything these days, Microsoft has decided to call it a day for Cortana – at least, from a consumer perspective.

As of late-2019, Microsoft decided to rethink its Cortana strategy for 2020 and beyond. And I don’t necessarily think that this is a bad thing, either…

In a statement to the press, Microsoft said the following about “changes” it is making to Cortana’s deployment on Windows 10, Xbox, and non-Windows 10 machines (specifically, Android and Apple’s iPhone):

“As part of Cortana’s evolution into a personal productivity assistant in Microsoft 365, you’ll see some changes in how Cortana works in the latest version of Windows 10. We’ve tightened access to Cortana so that you must be securely logged in with your work or school account or your Microsoft account before using Cortana, and some consumer skills including music, connected home and third-party skills will no longer be available in the updated Cortana experience in Windows 10.”

Cortana is No Longer A Consumer Voice Assistant

Microsoft is now completely rethinking what Cortana should be used for, and this came into effect way back in January 2020. The crux of the realignment, however, is simple enough: Microsoft wants to make Cortana more of a business tool than a consumer tool. And given much of Microsoft’s business is B2B, this makes total sense.

“Cortana is an integral part of our broader vision to bring the power of conversational computing and productivity to all our platforms and devices,” says a Microsoft spokesperson in a statement to The Verge.

“To make Cortana as helpful as possible, we’re integrating Cortana deeper into your Microsoft 365 productivity apps, and part of this evolution involves ending support for the Cortana mobile app on Android and iOS.”

Why? Again, it’s down to Microsoft not having its own mobile operating system; Siri and Google Assistant, for better or worse, are essentially the only voice assistants people use on mobile. Even Samsung failed to get any traction for its loathed Bixby assistant (and it’s the #1 phone brand by volume on the planet).

Cortana never stood a chance, basically. And though it will live on inside Microsoft’s Office 365 applications, as well as Outlook for iOS and Android, where it will be used to read emails out loud, the service as many Android, Windows, and iPhone users have come to know it since 2015 is now effectively dead.

What Does The Future Hold For Cortana?

The above might sound depressing. But development is still happening with Cortana inside Microsoft HQ, it’s just that Cortana is no-longer a consumer-facing product like Google Assistant. But this doesn’t have to necessarily be a bad thing.

In the long run, Microsoft would have far more success turning Cortana into a B2B AI, one that it could integrate inside its entire suite of core business applications.

Case in point, back in 2019, Microsoft acquired Semantic Machines, a conversational AI startup. The purpose of this acquisition? To bolster Cortana’s functionality and ensure that it isn’t just another linear AI that requires single questions asked in a certain manner or phrasing like Google Now and Siri and Alexa.

The biggest wins Microsoft can make with Cortana is inside Office 365 and Microsoft’s core applications like Teams. Personally, I think Cortana, in the not too distant future, will be used as a major selling point for Teams. Having a rock-solid, conversational AI that is woven into Microsoft’s core business ecosystem would be huge. 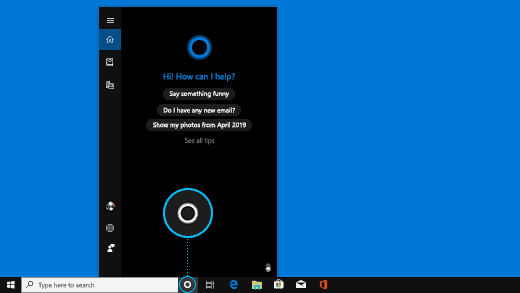 Think about it: you could have your very own, conversational AI that lives inside all your Microsoft applications, that learns about your business and its processes as it goes, that can be used by your team to access files, data, charts, and everything else in between.

That sounds a bit more useful than Google Assistant, right?

And there are even patents to show that this is what Microsoft is actually working on, as noted by GeekWire:

“Cortana would use machine learning and artificial intelligence to analyze message data from different sources — Microsoft Teams, Skype, WhatsApp, Twitter, emails, phone calls, and text messages are all illustrated in the drawings — to learn the meaning of each message. Cortana would score the messages and generate a text summary that would be turned into speech and sent to a listening device.”

Is Microsoft Turning Cortana Into Its Very Own Watson?

Basically, I think Microsoft is trying to turn Cortana into Watson, IBM’s very impressive business AI tool. Not only is this approach far more lucrative for Microsoft in the long run, as well as being a better fit for the way it does business, but it is also where the future of AI resides – with businesses.

Voice assistants like Siri and Google Assistant will have their place (the consumer market), but the future of AI is always going to be business and military applications.

This is the way of all things in the West.

And the reason is simple: profits – businesses want to make more profits by working smarter. AI can (and does) make this happen. For this reason, Microsoft would be wise to stop thinking about consumers and start thinking about business uses for Cortana.

And I think this is exactly what it is doing, I just don’t think the end result of its efforts will be called Cortana when it comes to market properly. Microsoft is already moving away from the Cortana branding, so expect something more “business-friendly” sounding for the AI technology that Cortana evolves into.

From Our Sponsors: Save 25% on ALL manner of premium phone, tablet, and laptop cases and accessories from Caseable.