If you’re looking for external storage that’s fast, you have to be looking at an SSD. But what is the best external SSD you can buy right now?

SSD with V-NAND offers ultra-fast data transfer speeds of up to 540MB/s (up to 4.9x faster than external HDDs); Ideal for transferring large-sized data including 4K videos, high-resolution photos, games, and more...

When it comes to memory, Samsung has been leading the industry for the best part of a decade, so when it came out with the Samsung T5 External Portable SDD, well… we genuinely got excited.

Why? Because this SSD is the cream-of-the-crop, packing in support for all major computing platforms, including desktop and mobile. And this makes managing your data on the go a breeze. You don’t even need to worry about what you’re connecting the Samsung T5 too either, as it’s supported by everything – from macOS to Linux and Windows.

The Samsung T5 Portable SSD is also 100% shock-resistant and, because it’s a solid-state drive, there are no moving parts, which means the T5 is practically indestructible. Just like the T1000 from James Cameron’s Terminator movies.

What about security? You need your data to be secure, even if it’s on an external SSD. Well, Samsung thought of this; the T5 features state-of-the-art encryption (AES 256-bit hardware encryption) and you can even set up a password on it to block anyone but you accessing it. 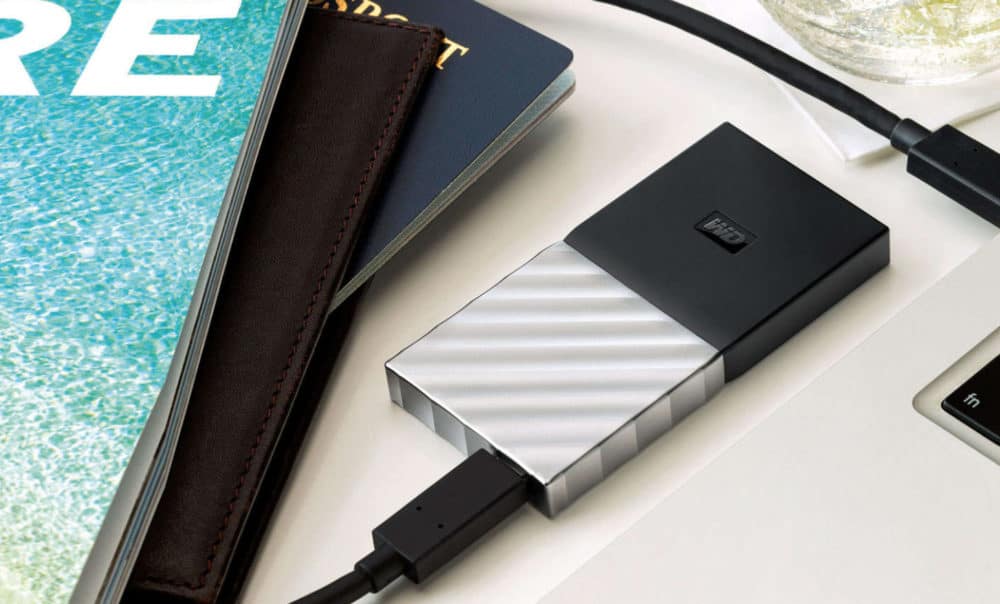 If you’re looking for value for money, the Western Digital My Passport SSD is easily one of the #1 portable SSDs money can buy right now.

What Are SSD (Solid State Drives) & Why Should I Care?

SSD stands for Solid State Drive, and unlike traditional storage, there are no moving parts – hence the name solid state. You can store media and files on an SSD, but what really separates them from cheaper hard drive storage devices is speed; an SSD has a higher read/write speed. And this translates into better overall performance, which is why you find SSD storage inside top of the line laptops and PCs.

How Do SSDs Work?

SSDs are made up of two key components: a flash controller and NAND flash memory chips. Unlike a traditional hard drive, an SSD has no moving parts; standard hard drives use a mechanical arm called an actuator and a spinning disk to read and write files stored on them.

Standard Hard drives read and write data magnetically. But because the processes rely on mechanical components, time is always an issue. Moving things takes energy and time. But if you don’t have to move anything, like on an SSD, you’re saving both time AND energy. 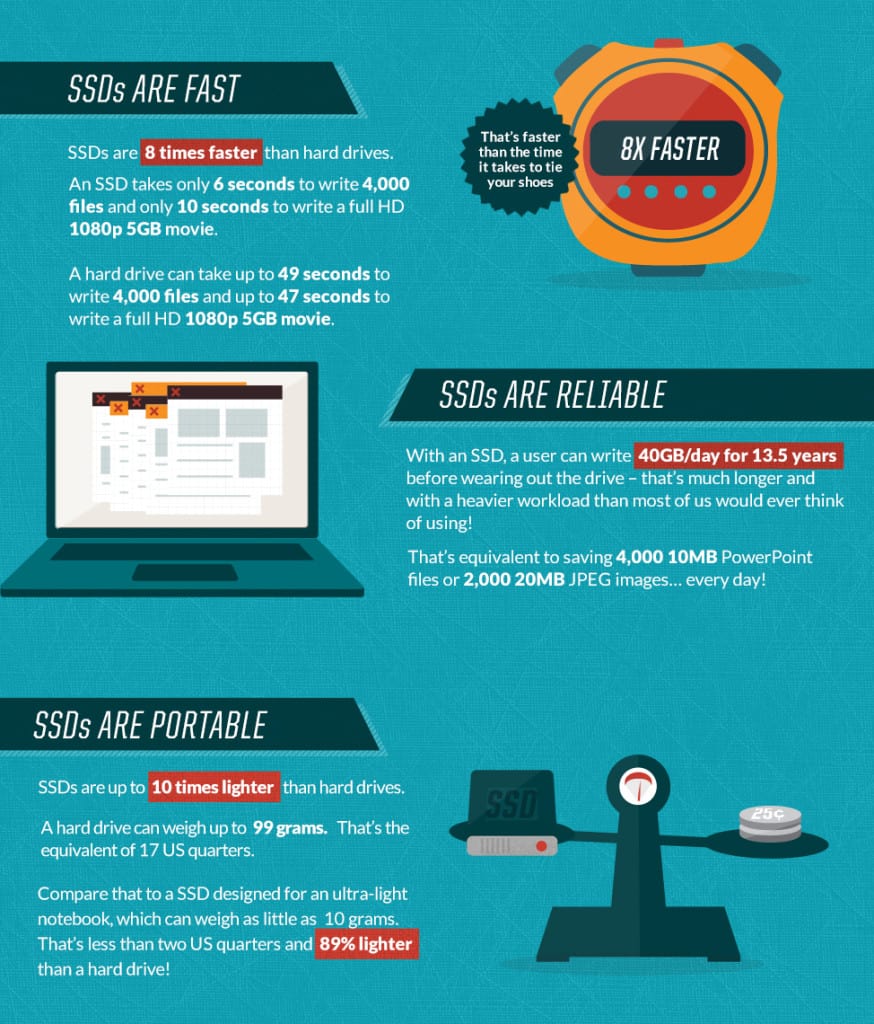 SSDs read and write information using a substrate of interconnected flash memory chips that are made from silicon chips. These chips, in turn, are then stacked on top of one another to increase the storage capacity of the SSD, so the more storage, the more layers of chips.

Intel, Micron, Samsung and Western Digital are constantly pushing the boundaries for these “stacks”, adding in more and more layers for higher densities of storage potential. SSDs are relatively new, but it is easy to imagine huge leaps forwards inside the next half-decade. Add in the rise of quantum computers and things are only going to get more interesting as read/write demands continue to increase.

As of right now, the densest SSD is made by a company called SK Hynix and its a 72-layer 256 GB 3D NAND device. However, Samsung, Intel, and others are constantly working to make denser SSDs, so expect SK Hynix’s SSD to be beaten in the very near future. 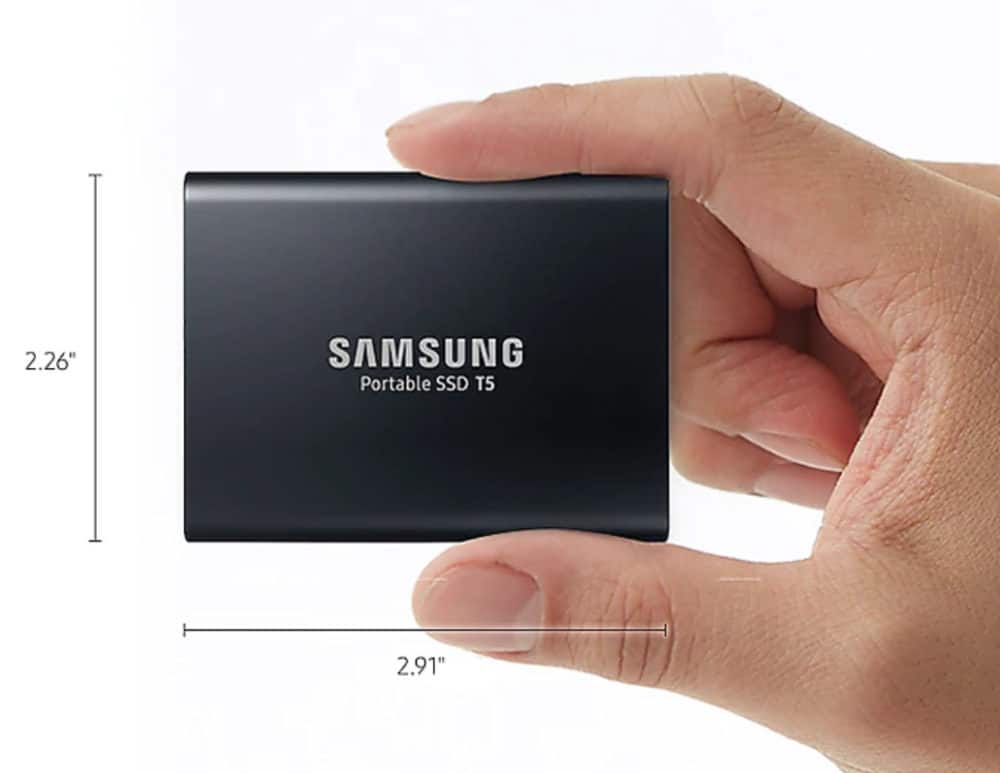